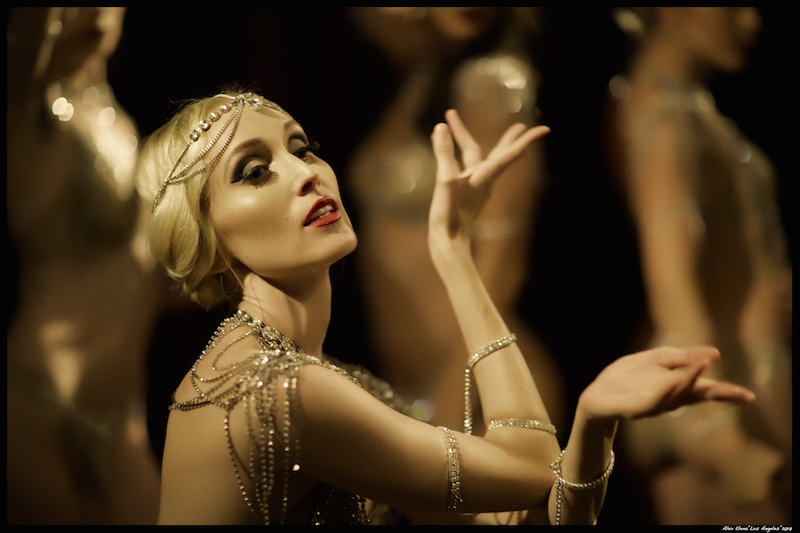 Los Angeles has both a blossoming immersive theater scene and an ample selection of fine dining options, but themed supper club Nuit Blanche manages a rare feat: It combines both in one seamless affair.

The phrase nuit blanche literally translates to “a sleepless night,” which is precisely what the party’s charismatic Parisian playboy host, Jean Marceau, hopes his guests will have. Unfortunately for Marceau, what he doesn’t know may hurt him, especially when it comes to the cabaret dancers he takes for granted. Those invited to his sybaritic soirees will have front-row seats to the ensuing drama over the course of a single, indulgent evening.

Nuit Blanche comes via Alan Dunn, founder of catering company Très LA. Back in 2011, Très LA was the in-house caterer for hotel-turned-venue Park Plaza, now known as The MacArthur. When he and his staff would park on Carondelet Street, he would notice the Carondelet House across from Park Plaza. Built in the late 1920s, the Italian villa-inspired home first served as a private residence, then later as a gallery and library space for the Otis Art Institute.

Despite admiring the home’s brick exterior several times, Dunn never ventured inside until he was helping a client find an appropriate venue for a speakeasy-style party and stumbled across a Craigslist post advertising the house for event rentals. He met with the owners and ended up not just renting the property, but buying it. The Carondelet House now operates as Très LA’s offices, as well as an event space.

The home’s exposed brick walls, high ceilings, courtyards, and ornate entrance make it a popular wedding venue for, as CBS writes, the “creative bride looking for someplace cool to come and put their stamp on with ease.”

But it wasn’t all weddings. A few times a year Très LA would host a dinner known as Underbelly, when the chefs could try out their strangest, most experimental dishes on a select group of guests. In early 2016, Dunn had the idea to weave in immersive storytelling elements.

“I knew I wanted to do something period, set in the ’20s, and my wife and I have a deep history with Paris. We met and fell in love there,” Dunn said. “We were also going to supper parties in people’s homes. There’s like a little subculture of supper clubs where you’ll meet really interesting people. We wanted to incorporate all of those elements into [our event], and started throwing ideas around.” 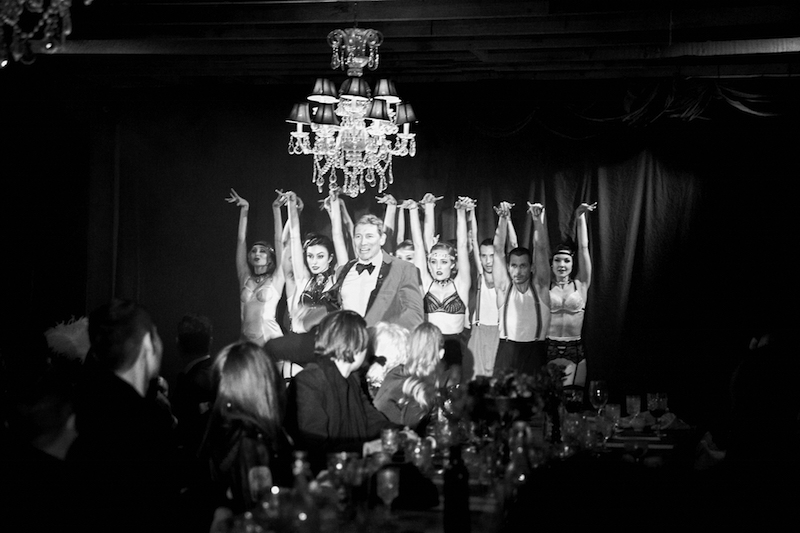 The result was Nuit Blanche, starring the fictitious Jean Marceau, expertly played by Australian actor/dancer Aaron Cash. Marceau is a French immigrant who built the Carondelet House and named it for the SS Carondelet, the ship that carried him to the States. He is known for hosting lavish parties, in which he exposes his new American friends to the art of Parisian cabaret.

When these esteemed guests arrive at Carondelet House, they are asked to surrender their cell phones; after all, it’s always the year 1928 at Nuit Blanche and cell phones haven’t been invented. Guests are also required to adhere to a black tie dress code (period-appropriate garb optional).

Marceau, at first, comes off as a charming, if incorrigible host who has thought of his guests’ every need and desire. Trays of champagne are freely passed around, while a full bar and absinthe fountain are available for those who’d prefer something stronger. A chanteuse belts out tunes overtop piano accompaniment. There are fortune tellers and chess players in the parlor, as well as a generous sketch artist who will gladly whip up pencil illustrations of a guest or two.

Intermixed with arriving guests are actors, their actions conveying tendrils of the story that is to come. A striking brunette sits at a desk, arching her lean neck, bothered by something but it’s not clear what.

After about a half hour, the actors converge in a rousing song and dance number before guests are led through a courtyard and to the dining room. Here, a live jazz band is set up in front of long, communal tables. 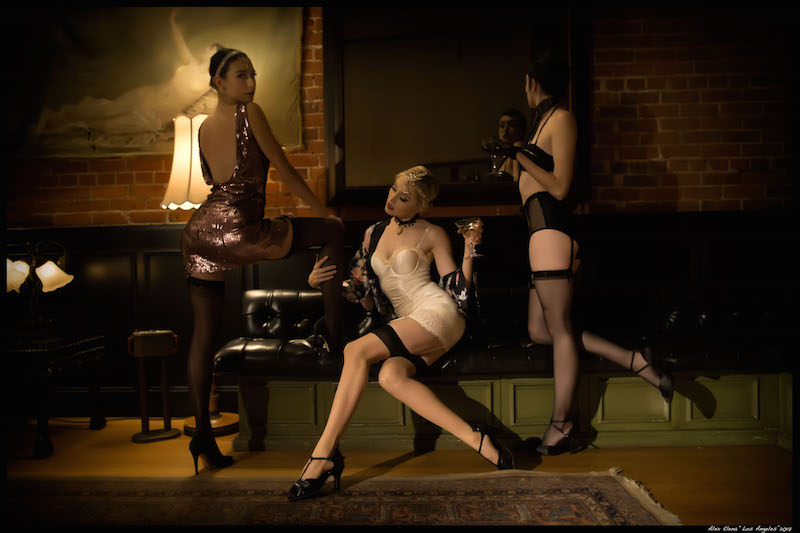 Bread and bowls of fruit are there for the taking, and the wine is free-flowing. The meal is five courses—six, if you count the champagne palate cleanser—and the waiters who deliver them might also burst into a tap dance routine. The first course is perhaps the most interesting: it’s a savory panna cotta made with tarragon and pecorino cheese. It’s paired with a lobster tail, tobiko caviar and lemon zest. Other courses include a peach salad, a Niman Ranch tenderloin in a green peppercorn and French brandy sauce, and an appropriately rich dessert, where chocolate mousse and a vanilla almond sponge cake are hidden inside a chocolate dome. Though this is the framework of the standard menu, vegetarians and vegans may be accommodated, upon request.

In between courses, Marceau introduces his entertainers in a way that suggests he definitely believes they, like the Carondelet House, belong to him. Some numbers, like a bit with a mime, are humorous; others are obviously meant to arouse. In one dance, a group of women clad in red lingerie perform just outside, pressing their bodies against the windows. One diner can’t help but comment what everyone else is thinking: “That’s hot.”

Yet there’s something unnerving about Marceau the libertine, and that’s where the narrative of Nuit Blanche lives. We are but trapped in a time loop, yet another group doomed to relive Marceau’s last party in Carondelet House, over and over again. Like the toy figure skaters on vintage jewelry boxes, he and the dancers retrace their steps every Nuit Blanche for our enjoyment and, presumably, eternity.

Of course, to tell you more would be to spoil the story. 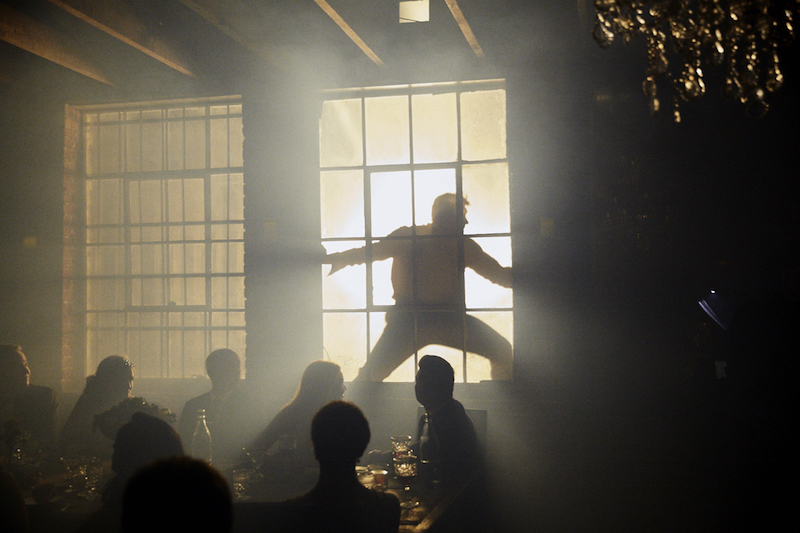 When dinner has ended, guests can meander back to the bar or upstairs. Here, another performance starring three black-clad dancers and dripping candle wax takes place. Cigars are available to those who want them. Downstairs, the bar continues to pour cocktails. The party seems to peter out around midnight, though there is never a suggestion one must leave.

For Dunn, Nuit Blanche is an ideal way to showcase the Carondelet House’s charms and his company’s culinary know-how. What might throw some potential guests off is the hefty $300/person price tags. In terms of bespoke, high-end experiences, that’s about on par with some of the Los Angeles’ fine dining options, like José Andrés’ Somni, which starts at $235/person without alcohol. It’s also not the most expensive immersive theater piece in history—Hall & Mirrors’ You, which accepted only one guest at a time, cost $5000, while Punchdrunk’s Sleep No More in New York starts $119.50 each, with no food or drinks.

Yet while certainly a splurge, Nuit Blanche at least earns its keep with ample food, a gorgeous setting, free-flowing libations, and constant entertainment over the course of several hours.

Curious? Check the website for dates as they are released.