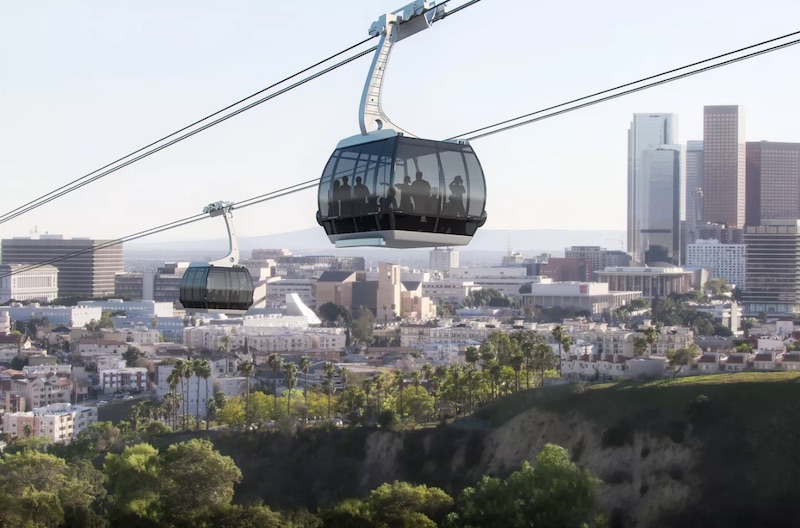 In an effort to alleviate traffic woes around Dodger Stadium on game days, a company has proposed a gondola that would transport passengers from Union Station to the stadium. Though there’s already an express bus that does just that, a gondola would offer a traffic-free way for fans to access stadium events, while hopefully reducing congestion in the area for residents.

According to Curbed LA, the company proposing the tram is Aerial Rapid Transit Technologies, LLC (ARTT), which just so happens to be founded by former Dodgers owner Frank McCourt’s son, Drew McCourt. The elder McCourt has pledged a portion of the gondola’s estimated $125 million price tag, the Los Angeles Times reports. The rest would be covered by private funding.

According to their current plans, ARTT anticipates each cabin could accommodate 30 to 40 passengers at a time, with rides lasting about 5 minutes. During busier times, such as on game days or when the stadium is hosting an event, there would be more cabins in use. The zero-emission system would also be ADA compliant, and would allow passengers to bring along their bikes. The company also notes that a ticket to ride the gondola would be cheaper than parking at Dodgers Stadium, but did not specify how much. If all goes as planned, they’re hoping to be up and running by 2022.

L.A. Mayor Eric Garcetti seems pretty enthusiastic about the gondola, pitching it at an MTA meeting on Thursday saying it wouldn’t be just for Dodgers games and their fans. “It will become something for visitors, for local residents, for first dates, for marriage proposals,” he said.

Los Angeles already has a few fun transit options, like funicular Angels Flight in downtown L.A.,and the tram that brings passengers up to the Getty Center. The Palm Springs Aerial Tramway, which spans over 2.5 miles from the Coachella Valley to San Jacinto Peak, is a popular tourist activity. The top station offers views, hiking, restaurants, and a bar—and in the sweltering summer months, it doesn’t hurt that the higher elevation usually results in a significant temperature drop.

The Palm Springs Aerial Tramway was referenced in a 1990 report via the Los Angeles County Transportation Commission, which explored alternative connections to Dodger Stadium. The report suggested that “such a transit mode would tend to serve as a visitor attraction  in itself because of views of downtown Los Angeles. Dodger Stadium and Elysian Park.” And according to CBS, ARTT’s proposal draws from a similar 2010 proposal, which also compared a potential gondola system to Palm Springs’ tram.

For now, the project is seeking support from Metro, who they hope will help with the environmental review and planning a route. ARTT is not seeking any help with funding from Metro.