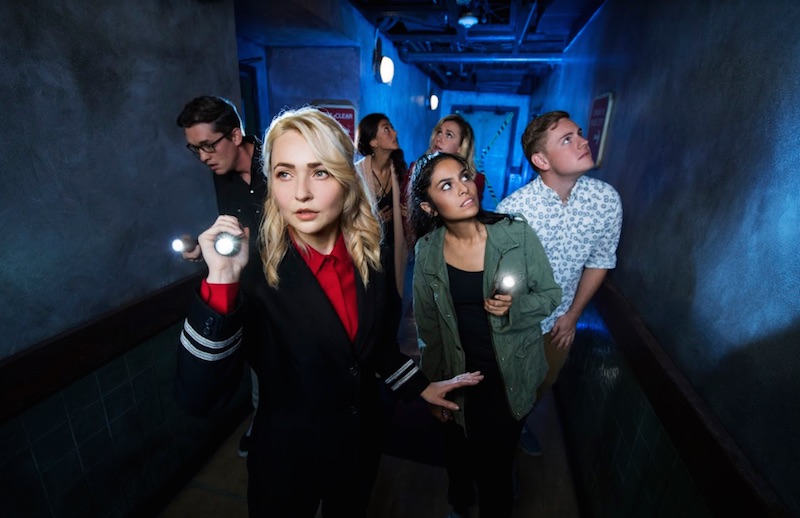 They ain’t afraid of no ghost. Photo: Courtesy of The Queen Mary

The Queen Mary is finally renting out the room it describes as its most haunted: the infamous Stateroom B340. The room saw its last guests in the 1980s, after which it was gutted and sealed off, with the only visitors being occasional ghost hunters on the Queen Mary’s paranormal tours. Beginning on Friday, April 13, B340 will be available to overnight guests.

The suite is made up of three former third class staterooms, and is, as such, quite large with operable portholes. In addition to the ship’s standard amenities, guests will also be provided with various tools to contact the spirit realm including a Ouija board, crystal ball, tarot cards, and ghost hunting devices.

“For decades we’ve had thousands of visitors request to occupy the room, and after 30 years, we are excited to once again extend the offer to our guests,” General Manager Stephen Sowards said via a release.

This is a departure from previous rumors indicating the room was just too haunted for any random guest—though just haunted enough to appear on SYFY Channel’s Ghost Hunters and the U.K.’s Most Haunted. The identity of B340’s ghost is mercurial, like most ghost stories. Yet this ghost is not the only spirit that roams the desk, at least according to eager tour guides.

The Queen Mary served during WWII, sailing Allied soldiers where they needed to go. In 1942, the Queen Mary was headed to Europe, carrying American soldiers to join their allies across the pond. The Queen Mary was on a zig zag course when her smaller escort ship, the HMS Curacoa, attempted to cross her off the coast of Ireland. The two boats collided. Of the Curacoa’s 439 passengers, 338 were killed.

Following the war, the Queen Mary became a passenger ship until it was moored in Long Beach in 1967. It was in that same year that rumors of the hauntings began. Guests claimed that lights and faucets would turn on or off on their own, or that they’d heard disembodied knocking. Some claimed that they would awake to their covers been ripped off the bed by an unseen force, or worse, would spot a shadowy figure looming over their bed in the dark.

The Queen Mary has never tried to suppress these rumors. Rather, it seems they’ve embraced the purported spirits and capitalism equally, offering ghost tours and other spooky events. Every Halloween, Queen Mary offers its annual haunted attraction, Dark Harbor. There are multiple mazes, scare zones, and interactive frights, which sometimes pay homage to the ship’s various ghost stories.

For instance, B340 was the title of a walk-through maze full of jump scares. In that version of the tale, the ghost is Samuel the Savage. Supposedly a passenger aboard the ship in 1948, Samuel was locked in the room after a violent outburst indicated he was a danger to others. When the crew later went to check on him, they found he’d been viciously ripped apart, either by himself or by someone—or something—else.

Other spirits include a little girl who drowned in the pool and continues to haunt the area, a mysterious woman in white, and another little girl whose father allegedly killed his entire family. Are any of these corroborated by news articles? Scully would say no, but feel free to let your inner Fox Mulder fly if it floats your haunted boat.

Guests can begin testing their nerves in B340 on Friday, April 13. Prices start at $499/night. Maybe bring some sage.