Robolights is, if nothing else, pure spectacle.

Imagine if you can nearly 9 million Christmas lights all sparkling in service to dozens of towering robot sculptures spread throughout some four acres of residential property in Palm Springs. Giant Santa Claus and Godzilla inflatables are perched on a rooftop above the entrance. Their greeting is merely a hint of what’s to come inside; something that is equal parts cheery and unsettling. It’s as if Dr. Seuss and Mad Max had a baby then decided to make a Disneyland-like theme park in tribute to their spawn. 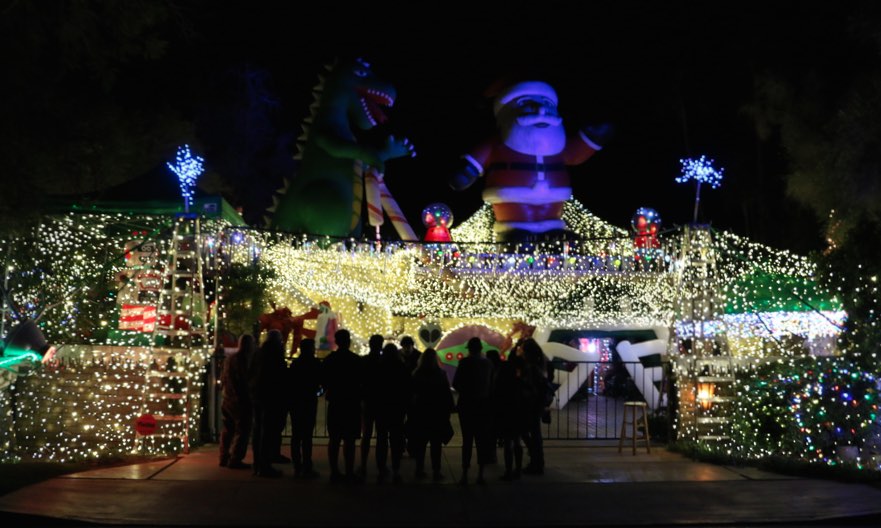 The entrance to Robolights. Photo by Brian Champlin / We Like L.A.

It’s hard to look at Robolights and not wonder, “Is the city totally cool with this thing?” The answer is, as often in life, it’s complicated. But before we talk litigation, let’s dive into inspiration. And that starts with the creator.

42-year-old Kenny Irwin, Jr.—the visionary behind this artwork—opens up his art garden to the public each and every year. Last Christmas season nearly 30,000 people visited Robolights. This year visitors can check out his lights display daily until January 1, 2017. The only thing Irwin asks for in return are donations, which all goes to the operation of his sci-fi, winter wonderland. He’s also hosting a toy-and-clothes drive for Syrian refugees at the entrance of his home. When it’s not the holidays, folks can still visit Irwin’s art garden by appointment.

[RELATED: Enjoy These Pics from Our Preview of Enchanted: Forest of Light at Descanso Gardens] 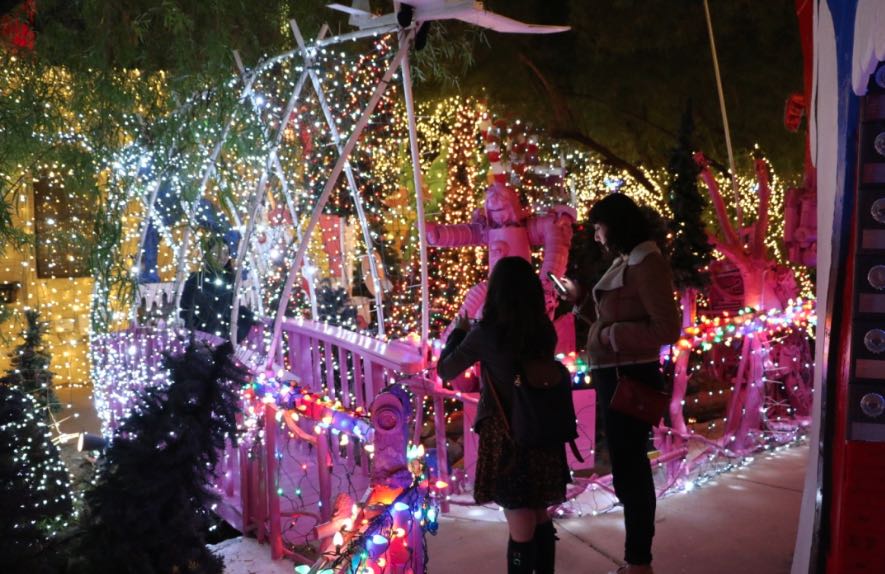 There really is something magical about walking through Robolights. Photo by Brian Champlin / We Like L.A.

2016 represents the 30th anniversary of Robolights. It’s a milestone the artist has dedicated to his father, Kenny Irwin, Sr., who died this year. “I wanted to dedicate it to my dad because he believed in what I did,” Irwin tells We Like L.A. “He said what I’m doing is a gift to the world and to never give up and to keep pursuing my dreams, so that’s what I’m still doing.”

On a December day, we stroll and zigzag through the pathways of the art-sculpture garden with Irwin, who fondly talks about his father. Creativity runs in the family, he says. Irwin, Sr., along with his late wife, opened La Mancha—a themed resort in Palm Springs based on Don Quixote—in the 1970s. Irwin, Jr. says he built a robot version of Don Quixote for his father when he was still alive, and it’s still on the property today.

[RELATED: This is What the Venice Canals Holiday Lights Look Like] 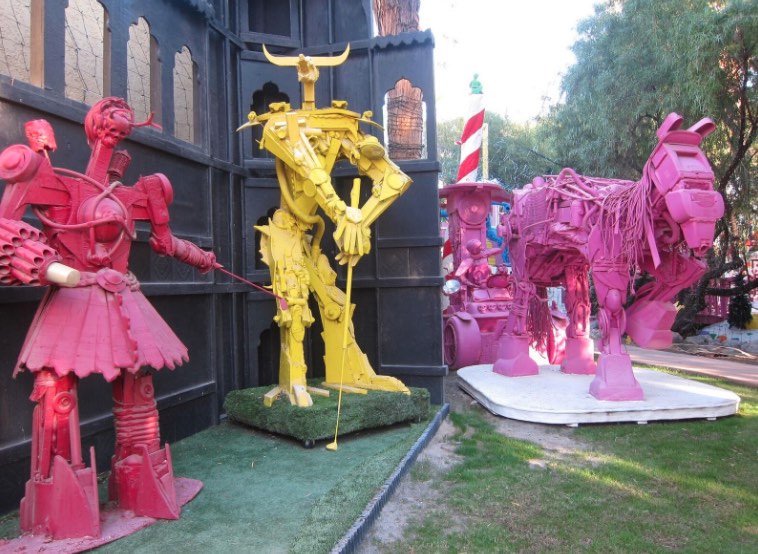 Robolights robots look a bit different during the daytime. Photo by Jean Trinh

As we circle the grounds every piece of art is like an explosion to the senses. Cross over a bridge through a tunnel of twinkling white lights and you make it into the mouth of a maniacal clown that’s fit for a creepy carnival funhouse. A life-sized neon-pink horse is outfitted from old appliances, and the seats of a carousel are pink toilets. In one area, you’ll find a cheerful holiday structure that looks akin to a gingerbread house with Christmas reindeer around it, and another sculpture lined with rows of identical white skulls. It is, in a word, trippy. 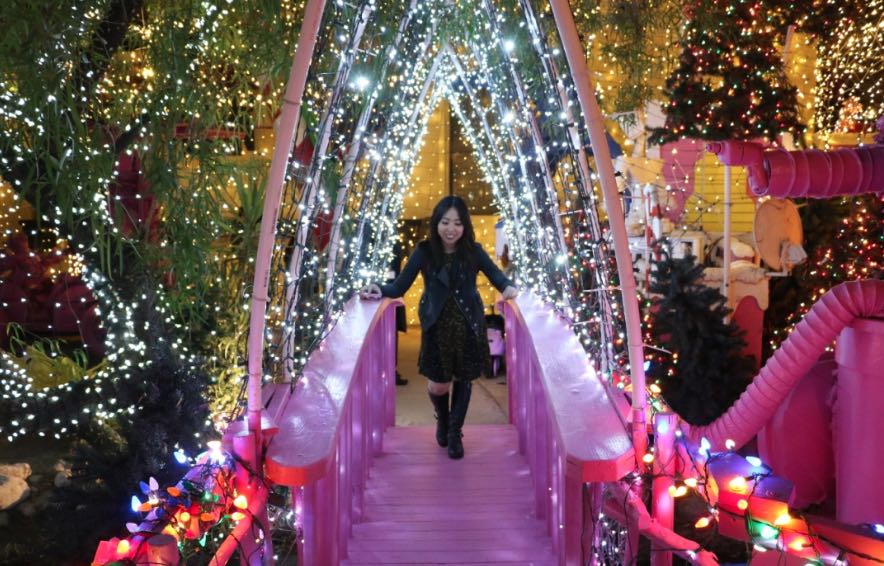 A colorful bridge crossing at Robolights. Photo by Brian Champlin / We Like L.A.

“We live in such a colorful world and universe, [so] I figure, Well, why not make everything brightly colored because it is what we live in?” Irwin says. “Why make everything drab and paint in brown and tan and mauve when you can have beautiful, bright colors?”

The materials Irwin uses to build his sci-fi playground are items that have been donated by hundreds of neighbors, local businesses, and fans throughout the decades. If you take a closer look at his sculptures, you’ll see everything from old TVs to motorcycles and John-McCain-gargoyle heads embedded into them. He recalls how one woman even lugged her busted speaker all the way from San Francisco as a gift to him. “Robolights is an institution,” Irwin says. “[It’s] all about art and recycling.” 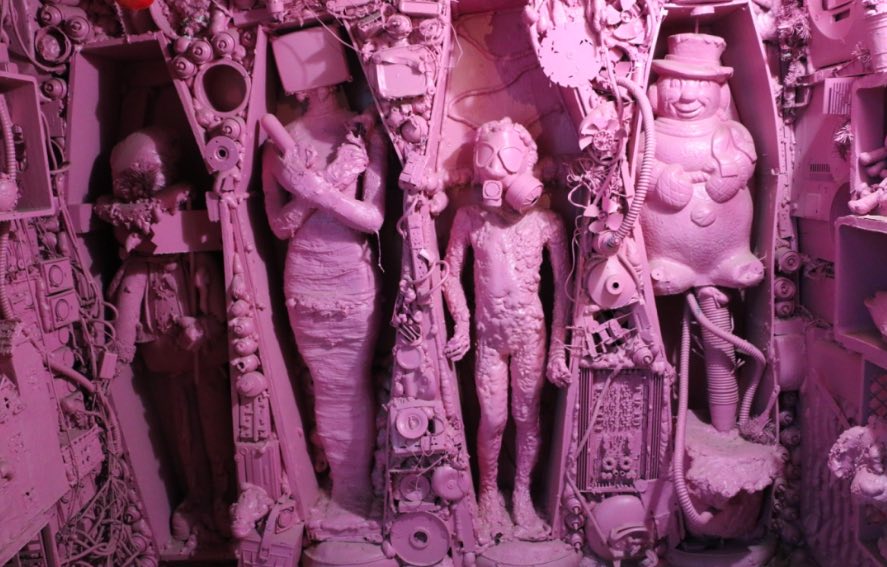 Recycled materials get plenty of creative reuse at Robolights. Photo by Brian Champlin / We Like L.A.

Irwin, who also makes intricate ballpoint drawings, has had a knack for art since early childhood. He says his parents told him that when he was just 2 years old he drew images of aliens and scenes of outer space with crayons around the periphery of his room in one single night. And when he was 4 he made an oil-pastel drawing of a red dwarf sun over an ocean planet. “I didn’t know what a red dwarf sun was at the time,” Irwin says. “I saw it in my dreams.”

For Irwin, it’s like he’s living in two worlds. When he sleeps, he has lucid dreams of distant planets, stars that burn brighter than our sun, and colors that just don’t exist in our world, he says. And then when he wakes up, he remembers all these images as clear as day. When Irwin dreams of an idea, he may not even start translating it to art until decades later when the right materials arise.

Taking a stroll through Robolights. Photo by Brian Champlin / We Like L.A.

In 1996 Irwin graduated from the California College of Art in Oakland with a bachelor’s degree in fine art. But, for the most part, Irwin says he’s a self-taught artist. All the mechanics you see in making his carousels spin, the technique in making skulls out of resin, and building home-like structures just come to him. “I figure it out on my own,” Irwin says. “It’s completely intuitive. I just know and I do it. It’s instantaneous.”

Irwin’s been living in the same home ever since he was born and his parents always let him build his art sculptures in their yard. In 1986 at the age of 12, he first started up his lights display. Even though Irwin converted to Islam nearly 15 years ago, the holiday lights are still something he keeps out of tradition. “I was raised in a Christian family, so Christmas happened, so I stratified those themes in my art,” Irwin says. “I don’t really celebrate Christmas. I do celebrate the togetherness of humanity and the inclusiveness of everyone. . . . Trying to touch people’s lives with light—it’s much bigger than celebrating any particular holiday.” 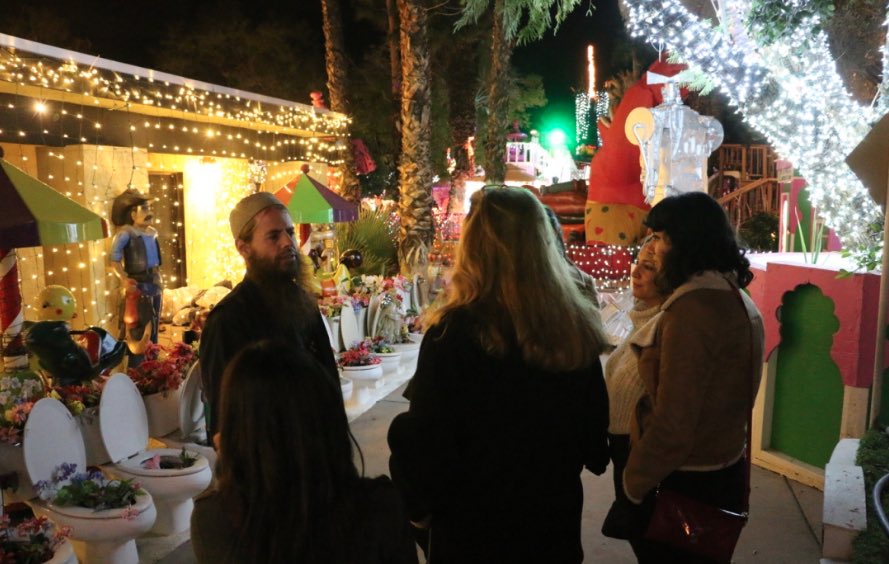 It’s been a tough year for Irwin not only because of losing his father (“I’m still reeling from it and I don’t know when I’ll ever recover from it,” he says), but he’s been dealing with an ongoing legal battle with the City of Palm Springs over what they believe are safety concerns with his art garden.

Right before Irwin was set to open Robolights, the City posted a “limited entry order” on his gate, warning guests that “dangerous conditions are present” and that entry to the yards of the home were prohibited. But Irwin opened it anyway and is still planning on keeping it running through the holidays.

According the Desert Sun, city officials said that Irwin has fixed most of the issues, but there are still two pending items that they consider “life safety issues”—the structure holding up the rooftop Santa and Godzilla inflatables and a wall that’s part of an aviary Irwin built for his birds.

This is where things get a bit tricky. The City of Palm Springs is planning on filing a civil court action this week; Irwin says it’s an order that is trying to get the court to prohibit guests from entering Robolights until he removes the inflatables. But for him, the Santa and Godzilla have been a tradition at the home for over 20 years, and he claims a structural engineer inspected Robolights in October and found no “imminent hazards to the public.” He’s planning to fight it. 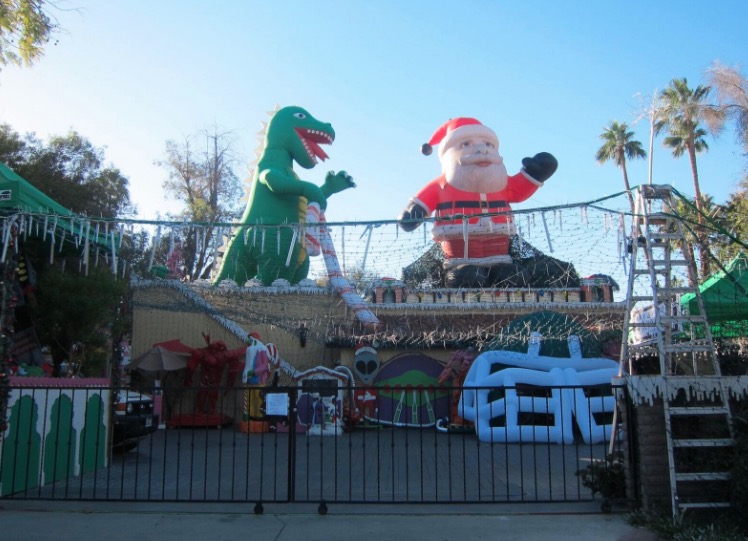 These are the giant inflatables in legal dispute. Photo by Jean Trinh

Irwin says, “In recent times [the City has] been trying to redefine my art as not art—as merely nothing more than structures—and try to impose building permits on my artwork, so they’re forcing me to remove artworks from my property.”

Jim Zicaro, Director of Building and Code Enforcement for the City, tells We Like L.A. that the City isn’t trying to shut Robolights down. “The City did not order Mr. Irwin to close Robolights,” Zicaro says. “Mr. Irwin can continue to maintain Robolights on the premises; however, he must comply with the laws of the City that each and every owner of single family residential property in the City is required to comply with.”

Regardless of what happens Irwin wants to keep operating Robolights. He’s even sketched out plans to create a 600-acre Roboworld “art-fusion amusement park,” a dream he had discussed with his father.

“I can’t predict the future, but this is what I do know: I won’t let the lights dim out,” Irwin says. “There’s enough darkness in the world as there is and what I intend to do is. . . to give [people] something special to touch their lives with.”

Robolights is located at 1077 E. Granvia Valmonte in Palm Springs, and will run nightly from 4 to 9:30 p.m. through Jan. 1, 2017. Before you journey to see the display we recommend checking the Robolights Facebook page for updates on any possible closures.

Jean Trinh is a food and entertainment writer, whose work has appeared in VICE, Thrillist, GOOD, Los Angeles Magazine, LA Weekly, and The Daily Beast. Previously, she was the Deputy Editor at LAist, and once landed the prestigious role as a judge for a bacon festival cook-off. Follow her on Instagram and Twitter.