This New SGV Hotel Has Robots That Bring You Room Service 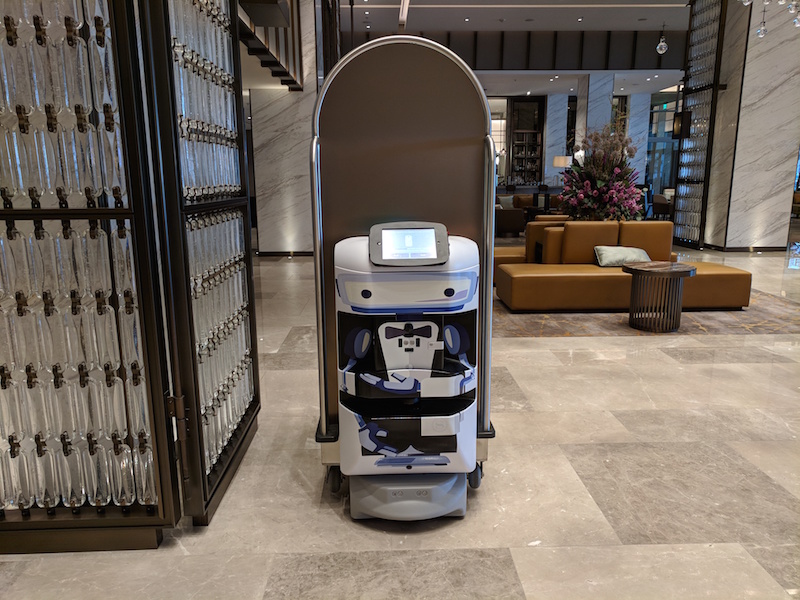 The Tug robot waits for orders in the lobby. Photo: Juliet Bennett Rylah

If you’ve ever been jealous of The Jetsons and their robot housekeeper, Rosie, then you’ll be delighted to know robot helpers are starting to pop up in hotels. Instead of a person standing on the other side of the door, you might find a boxy robot bearing food, coffee, toiletries or your luggage. Blade Runner-level they’re not, but they are quite cute.

The recently opened Sheraton Los Angeles San Gabriel Hotel is San Gabriel’s second hotel and, apparently, the site of the city’s first Starbucks. The 288-room, 17-suite space caters largely to Chinese visitors, who account for roughly 60 percent of guests. Americans might notice that the elevator is missing a button to the fourth floor. This is because in Chinese, the word for ‘four’ bears a similarity to the word ‘death,’ making it an unlucky digit. If you’ve ever stayed in a Vegas hotel, you may remember that hotels are often missing thirteenth floors for similar superstitious reasons. The hotel also contains several meeting rooms, a grand ballroom, a fitness center, a sixth floor club lounge, multiple restaurants and bars, a garden terrace with a pool, and yes, robots.

Each of the robots on call at this Sheraton is an Aethon’s Tug, a model typically found in hospitals. In that setting, they deliver a variety of items—including food, linens, and medicine—and take away trash, freeing up hospital staff for other tasks. The robot’s primary function at the hotel is to deliver luggage, food or other requested items.

Sheraton has decorated each Tug with decals of cutesy robots in tuxedos and dresses. They stand in the lobby, where guests can use them as way finding devices. Using a touch screen, guests can pick their language, then ask the robot to guide them to various key locations around the hotel. The robot can lead you to the elevator, pleasantly whirring as it rolls along, or it can take you to EST, the hotel’s high-end steakhouse. The robot is specifically programmed for the hotel and has an internal map it uses to navigate the property. Perhaps you are thinking of that Black Mirror episode, “Crocodile,” where an automated pizza delivery truck hits a pedestrian. The Tug robot users lasers to ‘see’ and will stop if there’s an obstacle in its way. If so, the robot stops, then finds an alternate path. If the robot senses itself running low on charge, it’ll report back to its docking station for a pick-me-up.

Each Tug communicates with the hotel’s Wi-Fi in order to call the elevator, and it can open any motorized doors throughout the property. The robot can’t open individual room doors, however. So, if a Tug is bringing you room service, you’ll receive a call that tells you your order has arrived. Open your room door, and you’ll find the Tug waiting for you. It’s only a little creepy, and only if you’ve watched The Terminator too many times. The phone call will also provide you with a four-digit code. You can activate a censor on the robot with your hand, then punch in the code. This will unlock a case. Inside, you’ll find what you ordered, be it a meal or more toothpaste. Remove your items and step away from the robot. After a short period of inactivity, the robot will merrily roll away, presumably back to the lobby or its next task. 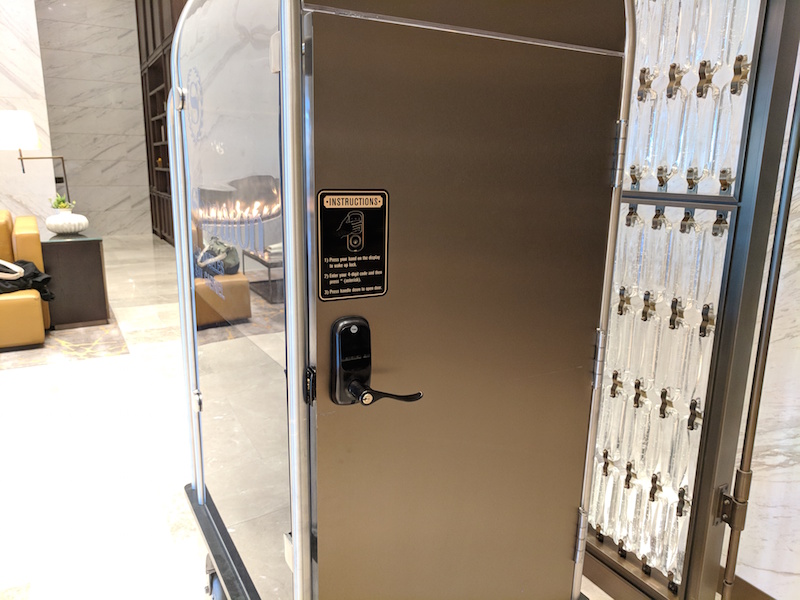 Room service and other items are held in here. Punch in a four-digit code to retrieve them. Photo: Juliet Bennett Rylah

I was invited to try out the robot for myself. I requested it bring me a pot of coffee. Sure enough, it arrived exactly on time. I could hear the quiet whirring of its movement just beyond the door. (More Terminator thoughts occurred.) When I unlocked the case, there was my hot pot of coffee, a small container of cream, and a variety of sugar and sugar substitutes. After I left it alone for a few moments, the Tug slowly rolled away, maneuvering around a corner with a surprising amount of grace for a machine that looks like a high-tech mini-fridge.

Though there are eight Tugs roaming around at any given time, they don’t replace human employees, who still prepare the items for the robots to deliver, greet guests, and perform other hospitality services.

According to Director of Sales & Marketing Fred Kokash, the robots enhance the guest experience by allowing hotel staff more time to interact with guests upon arrival as opposed to pushing luggage carts around. “The interaction now gives the opportunity to understand the purpose and persona of our guests,” Kokash said.