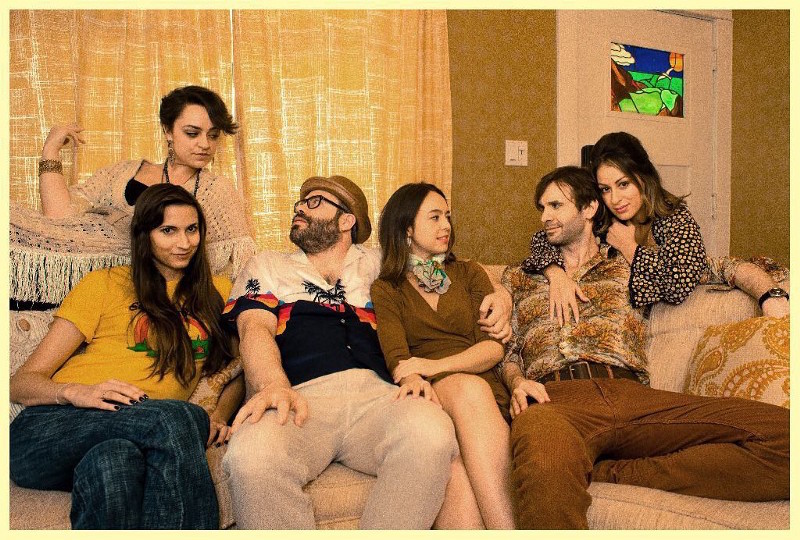 It’s late autumn, 1977. Jimmy Carter is president, Star Wars is still a new thing, and the Gibb brothers (that’s the BeeGees as well as little brother Andy) are dominating the airwaves. The very good-hearted and well-meaning Sharon (Katie Rediger) has invited you to a party at her Los Feliz home, ostensibly because you are all fans of the Equal Rights Amendment. However, Sharon is a homebody and a little fussy, so she’s sent her ‘peace and love’ sister Connie to greet you outside first. Connie (Karlie Blair), appropriately clad in bell bottoms, tells you a secret. Well, she tells you a lot of secrets, most of them concerning sexual escapades and drugs. Yet her most important secret is about a strange man who stopped her earlier and offered her $50 to hand out sealed envelopes to her sister’s party guests. The letters reveal that Sharon’s little shindig is more than a casual gathering; it’s a CIA recruitment party and they’ve been watching you.

Created by Nick Rheinwald-Jones, Safe House ’77 is a highly interactive immersive theater piece set to run through April 1. It takes place in a Los Feliz bungalow that’s been fastidiously decorated to reflect the 1970s. The theme is visible in the wallpaper, the furniture, the sundries in the pantry, the artwork, the vinyl records that spin through the night, and the issues of Cosmopolitan and Penthouse strewn on the coffee table.

“I went to multiple estate sales every weekend for several months and grabbed up anything big or small that might be useful in the show. Some things I was specifically looking for, but many of the props in the show—even ones that play major roles in the story—are just things I discovered and really wanted to find a use for,” Rheinwald-Jones said.

Rheinwald-Jones’ wife, Alexis, figured out the color scheme and made decisions on bigger pieces like the furniture, while the cast contributed ideas for props and decor. Much of it is interactive. You can flip through magazines and books, browse Sharon’s record collection, or peer through old viewfinders on the table.

“In general, I was really excited to buy things that could actually be used and handled by the audience, because I think that makes a huge difference in the experience,” Rheinwald-Jones said.

Apart from the mysterious letter, the night really does begin like a party. There are snacks on the dining room table and drinks in the kitchen. Connie will pour them for you if you ask nicely, but Sharon insists each guest only has three so as to keep their wits about them. “She’s kind of a square,” Connie admits.

As the evening progresses, other guests make their entrance, including Sharon’s boyfriend Lucas (Terence Leclere); his over-the-top ex Sonya (Katelyn Schiller); his boss, Max (Nick Rheinwald-Jones); and Max’s wife, Carlotta (Jennifer Blanco), who came to the States from Spain. The more you interact with the party guests, the stranger the night gets. Lucas plays a solid sleaze, while Sonya’s flair of the dramatic permeates the entire evening. Things may even get a little sexy, but don’t worry, your keys can stay out of the fish bowl and safely in your pocket.

With only ten guests and six actors on any given night, there’s a high level of interaction. Sharon might request your help in the kitchen, Lucas might want to discuss the finer points of the sound system, and Sonya may ask to read your aura in the bedroom. There are also a few group scenes where you’ll be tasked with performing a little improv yourself, including a rowdy game of “Never Have I Ever” that the adventurous and open-minded Connie seems destined to win. Yet what’s interesting about Safehouse is that unlike a lot of immersive experiences that walk you through on a very guided track, Safehouse gives you considerable space to explore on your own. In the course of the show’s 2.5 hours, there’s plenty of time to snack, grab a drink, snoop in any room with an open door, and gossip with your fellow guests.

Of course, being a spy thriller, nothing and no one are what they seem, so it’d be wise to go easy on the punch and pay close attention. You may be assigned a mission, whether it’s being a supportive friend or conducting some real espionage, so keep cool. (But definitely try the Chex Mix; Connie used a recipe.)

Rheinwald-Jones was inspired by other immersive shows, including Third Rail’s Then She Fell in New York.

“What struck me most about that experience was how much it was mine,” he said. “I think it felt that way for two reasons: one was the fact that I had my own unique path through the show that no other audience member shared; the other reason was the amount of attention I received from the performers because so many of the scenes were intimate. The aspect I love most about my own show is hearing the audience members discuss their experiences afterwards, knowing that each of them had a different experience and got to know different characters. I think that’s what makes immersive so special and I really wanted to deliver that.”

Safehouse ’77 runs on select dates through April 1. Tickets are $95 plus fees, and include the show, light refreshments, and up to three adult beverages.