Even if you’re not familiar with Roy Lichtenstein, you’ve most certainly come across his art. And starting today there’s a unique opportunity, right here in the city of angels, to immerse yourself in one of pop art’s most influential creators.

Lichtenstein’s work is the focus of a new exhibition at the Skirball Cultural Center called Pop For The People: Roy Lichtenstein in L.A. The exhibition opens today with a special after-hours event called Into The Night.

We were lucky enough to preview the exhibition at a media event yesterday, and frankly, we loved it!

Below are just a few reason you might want to check it out for yourself. 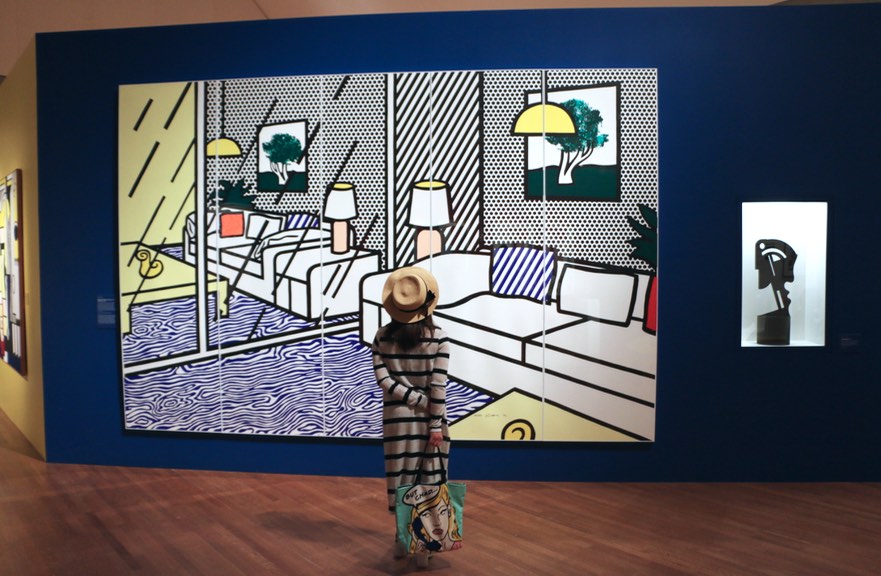 Pop For The People at Skirball Cultural Center. Photo by Brian Champlin / We Like L.A.

Lichtenstein was no overnight sensation. In fact, he was dubbed as “one of the worst artist in America” by the New York Times even as he was catching his break in the 1960’s. But Lichtenstein’s use of parody and eye-popping comic book images in his art gave it a sense of familiarity that everyday observers can relate to. In the end, his democratization of art proved to be a massive commercial and critical success.

2. Explore the Link Between Printmaker and Artist

Lichtenstein’s work was central to the printmaking renaissance that took place post World War II. One of his key collaborators during his rise to prominence in the 1960’s was the L.A.-based publisher/workshop Gemini G.E.L.

Their partnership created 124 editions over a 27-year-period, and the current Skirball exhibition features 20 of these works along with background about the unique relationship between artist and printer. 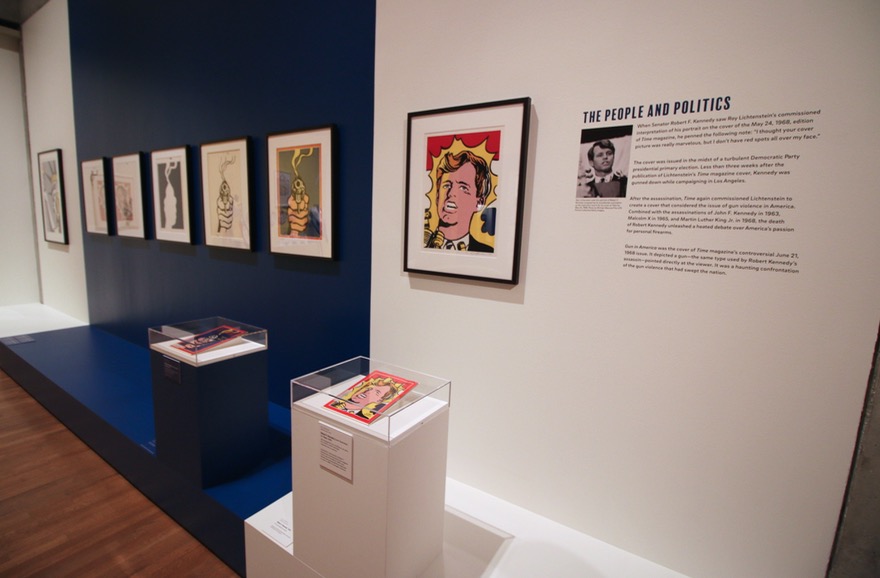 RFK and The Gun in America side by side at Skirball Cultural Center. Photo by Brian Champlin / We Like L.A.

3. See Why Lichtenstein’s Themes are as Relevant as Ever

A Lichtenstein portrait of Robert F. Kennedy appeared as the cover of Time magazine on May 24, 1968. Two weeks later Kennedy was shot dead. In the weeks following the assassination Time featured another Lichtenstein cover, this second one featuring a revolver aimed directly at the viewer.

Gun in America and RFK appear side by side at the Pop For The People exhibition. When put in the context of school shootings and other tragic acts of mass violence that have taken place over the past several years in the United States,  these works are important reminders that as far as we have come as a society, we’ve still got a long way to go.

4. Step Inside a Van Gogh Bedroom

On the lighter side of things, there’s a unique room that’s part of the exhibition that’s sure to be one of the L.A. Instagram hits of the fall.

This is me taking a nap inside Skirball’s life-size recreation of Lichtenstein’s “Bedroom at Arles” which is an update of a Vincent Van Gogh painting series of the same name.

Just taking a nap at a Van Gogh bedroom imagined by Roy Lichtenstein. You can check it out too at the Skirball Cultural Center as part of their Pop For The People exhibit taking place from Oct. 7, 2016 to Mar. 12, 2017. Pretty awesome! @skirball_la @roylichtenstein @geminigel 🎨 #roylichtenstein #popforthepeople #popart #artoftheday #mydayinla #artofvisuals

5. Visit Skirball for the First Time

If you’ve never had a chance to visit Skirball Cultural Center, this exhibition is a great excuse to stop by. In addition to Pop For The People, visitors can enjoy Chasing Dreams: Baseball and Becoming American (until Oct. 30), Visions and Values (ongoing), and the (perfect for kids) Noah’s Ark exhibit.

The center is open Tuesday–Friday from noon to 5:00 p.m. and Saturday–Sunday from 10:00 a.m. to 5:00 p.m. Adult admission is $12 children 2-12 are $7, and children under 2 get in for free. More information about all current exhibitions and planning your visit can be found at skirball.org.