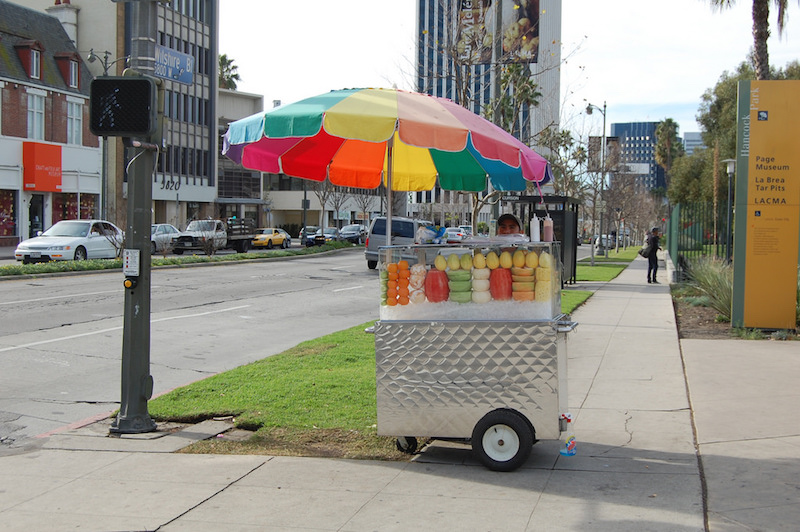 For years, every time we bit into a delicious street dog, we were doing so at the risk of the vendor who sold it to us. While Los Angeles City Council voted unanimously to decriminalize sidewalk vending in February of 2017, vendors could still face citations, fines, and harassment from brick-and-mortar businesses (and this guy who turned over an elote cart). On Tuesday, Los Angeles City Council voted 11-4 to draft an ordinance that would allow street vendors to obtain a permit, thus making their livelihood a legal one, the Los Angeles Times reports. This ordinance could be in place as soon as July, according to Councilman Curren Price, chair of the Economic Development Committee.

The Bureau of Street Services estimates some 50,000 sidewalk vendors are at work in L.A., 20 percent of whom sell food. These vendors will soon be able to purchase a permit, the cost of which will support enforcement of the new ordinance’s regulations, according to KPCC.

The sound of victory! Street vendors cheering outside of council chambers after a major win today at City Council. Councilmembers 🎉APPROVED🎉 (11-4) the recommended proposal to Legalize Street Vending WITHOUT the business veto!!! #LAStreetVendors #legalizestreetvending ✊🏽 pic.twitter.com/jBWqfntMWj

City Council also rejected the idea that business and property owners would be able to decide if vendors were allowed near them or not. Rather than saying yes or no, brick-and-mortar businesses will only be able to appeal a vendor permit if they have legitimate health and safety concerns.

“While it is reasonable to notify property owners adjacent to proposed vending locations, I am adamantly opposed to giving an individual control over who can obtain a permit and ultimately participate in the city’s sidewalk vending program,” Price said, according to CNS. “By creating a formal appeals process, we are allowing businesses the opportunity to weigh in, while also protecting the vendors from possible extortion.”

Several property owners and businesses along bustling Hollywood Boulevard complained in letters to City Council about congested sidewalks, litter, and distracting solicitors, among them a Hollywood Roosevelt hotel assistant manager and a Hollywood Chamber member. Perhaps most interesting was a letter from Church of Scientology International Humanitarian Programs Director Luis A. Gonzalez, which read, “It has become very apparent that aggressive solicitation on Hollywood Boulevard leaves a bad impression on the tourists.” I’ll keep that in mind the next time I try to get from the Sunset/Vermont station to any Kaiser building without being offered a Dianetics flyer.

Luckily for those concerned Hollywood establishments, there will be rules when it comes to sidewalk vending. Vending will not be allowed with 500 feet of some attractions, such as Staples Center or Hollywood Boulevard. In commercial and industrial areas, only two vendors will be allowed per side of the street, per city block. Those who sell food in residential areas must keep their transactions brief at only seven minutes per sale. In some areas, vending zones may be created.

Council voted for our plan to at long last write a #sidewalkvending ordinance! This creates a fair system to allow 1000s of hardworking mostly #immigrant, low-income workers come out of the shadows & feed their families. #teamhuizar #losangeles #LegalizeStreetVending pic.twitter.com/EC3dqs0XQK