Do you ever get upset when that there’s a lane closure ahead and some guy (or girl) rides the closing lane right until the choke point then ducks in ahead of you?

Well it turns out that r driver is actually abiding by the best practices for keeping traffic running as smoothly as possible in those conditions.

When it comes to merging lanes there’s basically two types of approaches you can take. First is the early merge, which basically means you get over as soon as possible when you recognize there’s a lane closure ahead. The second is the so-called zipper merge (or the late merge) in which lanes are filled in equal measure up until the closure point, then cars alternate filling open lane ahead (see video below).

The idea is pretty simple. The less braking, the smoother the traffic flows.

The state of Minnesota has been advocating for zipper merging and collecting data on the practice for years, and the results are pretty impressive.

Here’s some of the direct benefits they’ve observed,  per a report released by the State of Minnesota in 2008:

1) By creating two full lanes of traffic, we reduce the difference in speeds between the two lanes. Therefore, vehicles generally do not have a reason to switch lanes, and if they do decide to switch, then the traffic is traveling approximately the same speed in both lanes making the maneuver is much easier and safer.

3) When both lanes are moving slowly, then everyone is “equally” disadvantaged by the backup and while the driver may not be happy, they have no reason to be mad at a fellow driver in the backup. Therefore, “Road Rage” is reduced significantly.

Last year Washington state  joined the zipper merge bandwagon, encouraging its drivers to embrace the practice, and other states likes Illinois, Colorado, and Pennsylvania have also advocated for the zipper merge.

But as for California?

Well, according to a report from cars.com last year, Mark Dinger, spokesman for the California Department of Transportation, says the Golden State doesn’t necessarily agree with directing drivers to employ the zipper merging strategy.

In California signs are posted at a half-mile, 1,500 feet, 1,000 feet and at the merge point letting the driver know a construction zone is ahead and which lane is ending. In this way drivers are implicitly directed to merge much earlier than might be optimal from a pure traffic flow standpoint.

The reason is a safety concern, with Dinger citing Federal Highway Administration data that shows sudden braking caused by late mergers results in rear-end collisions — the most common type of work-zone accident.

“Drivers who cut in at the last minute cause sudden stopping and lane changes, which cause direct collisions as well as delayed-reaction collisions by drivers further back in the queue who may not be paying attention or expecting traffic speed to suddenly change,” he said.

I think fundamentally one of the problems with the zipper merge system is that everyone has to be utilizing it, and safely utilizing it for it to be truly effective. This includes voluntarily NOT early merging, plus always driving at a safe distance (multiple car lengths) behind the vehicle in front of you and being courteous enough to allow one or more drivers to seamlessly merge in front of you (i.e. don’t try to cut a dude off just because they stayed in the lane that was ending right up until the last second). 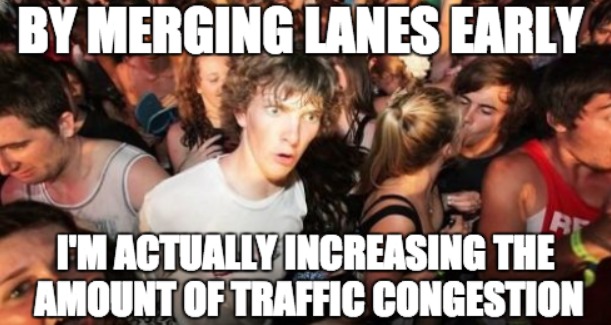 Upshot: Don’t expect our state to flip its stance on our merging practices any time soon or create any advocacy campaigns for zipper merging. But at least now you don’t have to be as pissed off at the totally nice driver who you think is cutting you off on the freeway at the last minute right before a lane ends.

In fact, he/she is probably doing us all a favor.