Who doesn’t like free? Over the next seven days Los Angeles businesses are offering some tasty and fun deals you won’t want to miss.

As always, enjoy  all the tasty news bites below, along with the best food events happening this week.

Don’t let your friends miss out on Free Chili Day! Tag someone you want to bring by for a FREE cup of chili on #freechiliday, Tues., 1/23 beginning at 10:30 a.m. #free #abc7eyewitness #losangeles #doloreschili #chili #cupofchili #philippes #philippetheoriginal #philippetheog

Philippe The Original will once again host their popular Free Chili Day on Tuesday, January 23. Sponsored by Dolores Chili, Philippe will serve the first 500 people a free cup of chili, with or without beans, and all the fixins from 10:30 a.m. to 1 p.m.

From January 22-28, food enthusiasts can explore the diverse culinary scene of Alhambra through a variety of lunch and dinner prix-fixe menus. The city of Alhambra is home to some of the best Asian restaurants in Los Angeles but also has a notable Peruvian, Italian, Mexican and American presence. For restaurant week specially priced menus will be broken down to $15 or $30 for lunch, and between $20 to $50 during dinner. Participants include Mancora Peruvian, Budda Belly Modern Kitchen, Charlie’s Trio Café, 38 Degrees Ale House & Grill, Sage Bistro 626, Limerick’s Tavern, Diner on Main, Bon Appetea Café, Side Bar Grill, Tokyo Table, Big Catch Seafood, Dickey’s BBQ Pit Alhambra, and Mahan Indian.

New item alert! Our inspired Filipino chef just dropped off this super healthy Filipino-style Vegan Mushroom Curry! This is a lush coconut milk curry dish with a great heaping of gingery and savory seasonal vegetables & mushrooms, with a little kick of Thai chilies. Come by and try it out! 🤘🤘 @acboral

Gourmet Meals On The Go in The SGV

The folks behind the 626 Night Market have a new takeout concept called Chef Box that functions as a creative platform to showcase local chefs. Read all about it and grab a bite there to support local makers. Aspiring chefs can also apply for the program for a chance to be featured in their daily rotation.

Where to dine in Costa Mesa

We recently put out a quick and easy guide of Fun Things To Do in Costa Mesa that includes a profile of the thriving food scene. Discover great beers in the O.C. grab some Cuban bites, fresh seafood, a meal from Top Chef finalist Amar Santana or an epic friend chicken sandwich from The Crack Shack. Find it all in our guide here.

Michael’s Santa Monica will debut a happy hour menu today. Available Monday through Saturday from 5:30 p.m. to 7 p.m. at the bar + lounge, the menu features elevated takes on classic bar bites like seared deviled eggs ($8), confit chicken wings with fish sauce caramel ($10) and for those looking for more than just a bite, a “Guerrero” burrito ($14) is also available on the menu. Guests will find small production and natural wines as well as specialty cocktails ($8) and beer ($5) on the happy hour menu. There’s also a $1.79 cocktail offered from 5:30 p.m. to 6 p.m. as a nod to the year Michael’s opened (1979).

West Hollywood tapas concept, Chef’s Not Here will open its doors for dinner service this Wednesday, January 17. Situated on trendy Melrose Ave., the new spot is owned by chef Ressul Rassallat and will focus on small shared plates influenced by global flavors. It will co-share an intimate rooftop space with the newly opened Sea Salt Poke (also owned by Rassallat) which is open all day. Customers will be able to order from both places during Chef’s Not Here’s dinner service. See the full menu below. 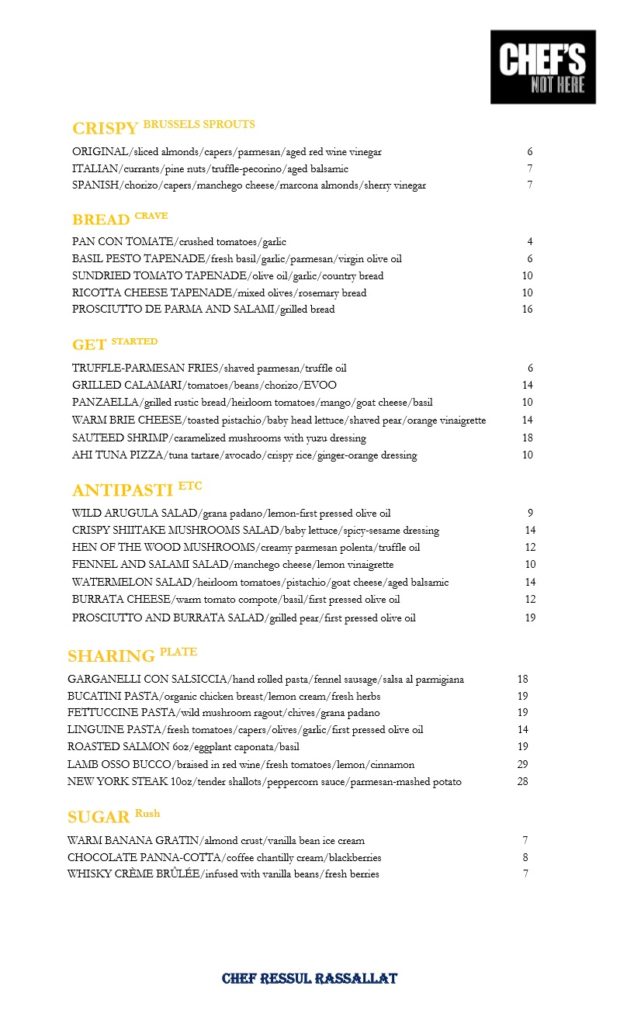 Ben & Jerry’s is throwing a pop-up carnival to announce their newest ice cream flavors. Happening at the corner of Hollywood Blvd. and Vine Street, ice cream lovers will have a chance to partake in carnival games, rides and sample the Pint Slice flavors totally free. FREE

dineL.A. the city’s restaurant week (January 12-26) kicks of this Friday with another round of exclusive lunch and dinner menus (and deals!) at a laundry list of the city’s finest eateries. Want to know where to eat among the huge list of choices? Start here, with our picks for 20 can’t-miss menus.

Get a free Margherita pizza during the grand opening of MidiCi The Neapolitan Pizza Company in Century City. Happening Tuesday and Wednesday from 11 a.m. to 2 p.m. Limit one per guest. FREE

Redondo Beach Restaurant Week is back from January 12 to 26. Dozen of eateries from the beach city’s growing food scene will be participating by offering either specially priced prix-fixe lunches and/or dinners, or other Restaurant Week-only special offers

Stop by the Skirball for “Mexican Today” a conversation with celebrated chef Pati Jinich who grew up in Mexico City, writes about food for the Washington Post, and has cooked at the White House for President Obama’s Cinco de Mayo celebration. The event is free to attend.

Looking to step outside your culinary comfort zone? Savor a five-course meal where each dish features a bug or insect at a EatBugEvents dinner in Culver City this Thursday.

Iron Triangle turns two this Saturday with an epic BBQ Showdown where you decide the winner. $20 gets you a three item plate from competitors Moo’s Craft Barbecue and Peaches’ Smokehouse & Southern Kitchen, feast and then vote for your favorite. The BBQ starts at 1 p.m. and concludes at 6 p.m. or until the food runs out. Iron Triangle will also have new beers on tap including Sluice Gate IPA, Blasting Cap Vienna Lager, Stock and Trade: English Pub Ale on Nitro and Barrel Aged Jawbone Stout.

The 3rd Annual Playa Provisions Snow Day is family friendley fun for kids and adults. There will be sledding and other wintery activities going on while the Playa Provisions team grill up hamburgers and hot dogs all afternoon. As for dessert folks can gather around the fire pits to create their very own s’mores.