A Horror Experience Based on ‘The Strangers’ is Coming to Hollywood 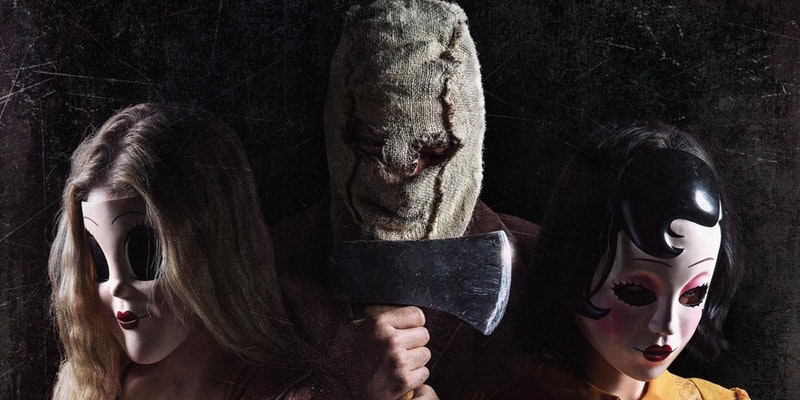 The Strangers are coming to Hollywood.

To celebrate the release of The Strangers: Prey at Night, a new pop-up horror experience is coming to Hollywood starting February 28. Yes, you too will have your chance to be terrorized by the three masked villains of this horror franchise, this time in a deserted trailer park.

The Strangers (2008) was a popular addition to a the ‘home invasion’ horror genre. Like The Purge, Funny Games, and the subversive You’re Next, the trope revolves around a group of people who must defend themselves inside their own home (or occasionally, their own cabin rental from Hell) against a variety of sadistic intruders. It’s like Home Alone, but for adults and with a lot more blood. The original film starred Scott Speedman and Liv Tyler as James and Kristen, a young couple who ends up going back to a home owned by James’ parents after attending a wedding. They’re already dealing with an awkward situation: James recently proposed to Kristen, but she said no. To make matters worse, they’re soon interrupted by a mysterious blonde who knocks at the door and asks if Tamara is there. The couple tells the woman she’s got the wrong address, and that’s when their their night of terror begins. Three masked strangers—known as Man in the Mask, Dollface, and Pin-Up—soon stalk and torment the couple as they desperately try to escape.

Director Bryan Bertino said he was loosely inspired by a childhood experience, in which a stranger came to their door and asked for a person who did not live there. “We later found out that these people were knocking on doors in the area and, if no one was home, breaking into the houses,” Bertino said.

Now, a decade later, a sequel is set for release. Prey at Night stars Christina Hendricks, Martin Henderson, Bailee Madison, and Lewis Pullman as a family on a road trip. When they arrive at a trailer park where they intended to stay the night with a relative, they find the park weirdly abandoned—or is it?

The Hollywood experience will put you and your friends in a similar not-so-vacant trailer park, making you the protagonists as you attempt to flee The Strangers. Organizers of the event are being intentionally murky about the details, but we know it’s a 10- to 12-minute immersive horror experience designed for adults 18 and up. Participants are warned that the show will be “intense, frightening and disturbing” as guests encounter “terrifying and homicidal characters whose makeup, costumes and weapons reflect characters in the film.”

So, if we had to wager a guess, The Strangers experience will be similar to the IT house that popped up on Hollywood Blvd. in anticipation of the 2017 Stephen King adaptation.

Tickets are available now through March 1 here. They’re $12 a piece, with dates spanning February 28 through March 11.  The experience is located at 1634 North Las Palmas Avenue, which appears to be a parking lot; we expect it has been transformed into the trailer park of your nightmares.

And speaking of trailers, here’s one for The Strangers: Prey at Night, if you dare.