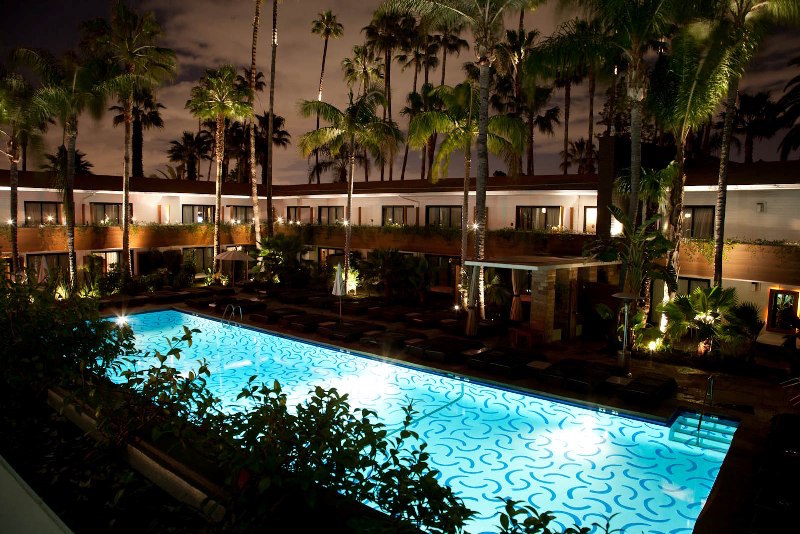 Image via Roosevelt Hotel in Hollywood

1. Boo at the L.A. Zoo returns for a spooktacular season this year with a new “Nocturnal Adventure” maze and favorites like the Zoo’s “Animals and Boo” creepy crawler encounters, pumpkin-carving demos and other family-oriented fun. Weekend tickets will feature “Fearsome feedings,” during which carnivores will devour their favorite carcasses and bones.

2. Celebrate the art of the music video during the 7th Annual Los Angeles Music Video Festival, taking place over seven nights from October 1 to 7 at various L.A. locations. This grassroots festival is the largest music video event in the country and includes video screenings, speakers, a juried competition, musical performances, and more.

3. There’s a Great Pumpkin Hunt happening at the South Coast Botanic Garden from Oct. 1 to Nov. 30 everyday from 9 a.m. to 5 p.m. featuring an imaginative scavenger hunt, light hiking, a pumpkin shop and access to the gorgeous 87-acre grounds. Great for families. Halloween costumes are welcome.

4. Beyond Fest returns from Sept. 29 through Oct. 10 with 12 days of special screenings from around the globe at the Egyptian Theatre in Hollywood.

5. The folks at Rooftop Cinema Club are back with a special screening of Paradigm Lost presented by Red Bull Media House at their Montalban rooftop in Hollywood followed by a q&a by surfer and director Kai Lenny.

6. Grab dinner On the Lot in Los Feliz where an array of gourmet food trucks are ready to serve you. Taking place at Our Mother of Good Counsel from 5 – 8:30 p.m.

7. The month of October is still a warm one so the iconic Hollywood Roosevelt hotel will throw Angelenos an “Endless Summer” ​Movie + Swim ​series every Tuesday night. Catch throwback films as you lounge by the David Hockney painted Tropicana Pool and enjoy a curated menu of food and drink offerings unique to each movie, this week it’s Blade Runner. All you need to do is rsvp to get in.

8.  Pacific Standard Time LA/LA is in full swing with a four-month-long exploration of Latin American and Latino art in relation to the City of Angels. Led by The Getty the high profile event is a collaborative effort with dozens of art institutions across the city. Check out our top highlights here.

9. The folks at Rooftop Cinema Club are back with two screenings at their rooftop locations. 10 Things I Hate About You at LEVEL in Downtown Los Angeles and La La Land at Montalban in Hollywood.

11. Griffith Observatory offers a Sunset Walk & Talk one evening a month. At this free event, guests will enjoy a sunset hike led by a Griffith Park park ranger and a museum guide. FREE

13. Sound Off Silent Disco nights head to the Sherman Oaks Galleria for a free wireless-headphone dance party featuring two live DJs playing three hours of your favorite, danceable songs. There will also be free food samples from Galleria vendors during the party. FREE

14. The folks at Rooftop Cinema Club are back with two screenings at their rooftop locations. La La Land at LEVEL in Downtown Los Angeles and The Big Sick at Montalban in Hollywood.

17. The city of San Gabriel is putting their own spin on Oktoberfest by throwing a Dumplings & Beer Festival in the Historic Mission District this Thursday featuring a wide variety of dumpling vendors, craft beer tastings, live entertainment, a “Best Dumpling” competition as well as a Dumpling Eating Contest.

19. Time to get in the Halloween spirit. The Los Angeles Haunted Hayride returns to The Old Zoo in Griffith Park from September 29 to October 31. This years theme is “Clown” and features four different freaky zones, a slew of demonic clowns, a corn maze and more. Check for discount tickets before making your purchase. DISCOUNTED (via Goldstar)

20. Back for its 8th year, Wicked Lit is a spooky immersive theatre experience that takes classic and unique horror literature and turns them into plays at the Mountain View Mausoleum & Cemetery every Thursday through Sunday starting Sep 28 and running through Nov. 9. Check for discounted tickets before making your purchase. DISCOUNTED (via Goldstar)

21. The Queen Mary’s Dark Harbor will transform into a seaport of the damned this Halloween season with terrifying mazes and monsters at every turn like the Iron Master and Graceful Gale. This year they’ll reveal their newest member of the crew, his name is Chef and he’s got a carnivorous kitchen staff with a big appetite. Happening Thursday and through the weekend. DISCOUNTED (via Goldstar)

23. Young the Giant with Cold War Kids and Sir Sly will play at the Fivepoint Amphitheater in Irvine. DISCOUNTED (via Goldstar)

25. The folks at Rooftop Cinema Club are back with two screenings at their rooftop locations. Back To The Future at LEVEL in Downtown Los Angeles and Jurassic Park at Montalban in Hollywood.

26. Knott’s Scary Farm is back with their signature haunted attractions, mazes and thousands of monsters ready to scare the living day light out of you and your crew. Be sure to check for discount tickets before making your purchase. DISCOUNTED (via Goldstar)

27. The Actors Gang in Culver City will open their season with Captain Greedy’s Carnival, a musical satire mocking greed, humbug, corruption and predatory capitalism. Follow the story of four innocents who get tricked by a legendary con man. From there on they’ll encounter freaks, illusion, terrifying exhibitions and more. Happening Friday and Saturday. DISCOUNTED (via Goldstar)

28. Get spooked during Paramount Pictures After Dark Tour: Tales From The Other Side where you’ll hear scandals of yesteryear and the lost souls who haunt the studio lot by moonlight. The tour starts at dusk with champagne as you head into the studio lot where you’ll weave in and out of sound stages and the darkest corners of the infamous backlot. You’ll end the night next door at Hollywood Forever Cemetery. DISCOUNTED (via Goldstar)

30. Get ready to shriek, because Urban Death: Tour of Terror is back at Zombie Joe’s Underground Theatre Group in North Hollywood. This haunted theater attraction features a terrifying performance and a maze of inexplicable horrors, unfathomable monstrosities, and the disturbing spirits that walk among us. The organizers have been creating versions of Urban Death for 12 years and the theatre group is known for creating boundary-pushing live progressive theater. Happening every Friday and Saturday this month. Check for discount tickets before making your purchase. DISCOUNTED (via Goldstar)

31. Eat|See|Hear returns with Front Porch Cinema, a free movie night below the stars every Friday on Santa Monica Pier from Sept. 29 through Oct. 27. This fall film series will also feature music, drinks, and bites before each screening. Guests have the option to rent old-timey lawn chairs on site or bring their own gear. The series continues with a screening of The Princess Bride. FREE

32. The L.A. Greek Festival returns Oct. 6 -8 for a big fat block party featuring delicious Greek food, live music, dancing and more. Now in its 19th year, the event is a popular one, drawing over 15,000 each year. This year honorary chairs and co hosts are Tom Hanks and wife Rita Wilson.

33. It’s Oktoberfest at the Pomona Fairplex! Oom-pah music, the Chicken Dance, authentic German brats and brews such as wheat beers flown directly from Germany will be on hand to help you party in Bavarian style. DISCOUNTED (via Goldstar)

35. Head over to Torrance for one of the most well-known Oktoberfest celebrations in the L.A. area! Alpine Village Oktoberfest runs Sept. 8 through Oct 28 every Friday, Saturday and Sunday. Enjoy traditional Bavarian food, beer, dancing, and more.

36. The Griffith Observatory hosts a monthly forum where some of the most amazing phenomena in the known universe are explained and discussed. It’s called All Space Considered and it takes place on the first Friday of every month. FREE

39. The folks at Rooftop Cinema Club are back with two screenings at their rooftop locations. Raiders of the Lost Ark at LEVEL in Downtown Los Angeles and Mary Poppins at Montalban in Hollywood.

41. There’s a Musical Parody of Hocus Pocus at Los Angeles’ Rockwell Table & Stage. The 1993 family comedy starred Bette Midler and Sarah Jessica Parker as three witches looking to feed on the youth of the world on Halloween. Only two teens, a young girl and a once-human cat can stop them. In this version expect powerhouse songs and lots of jokes. DISCOUNTED (via Goldstar)