This week includes free AFI Fest screenings, Sleepless (an after-hours party) at the Music Center, the Only in Hollywood Festival, a music video film festival, First Fridays, and much, much more to choose from! 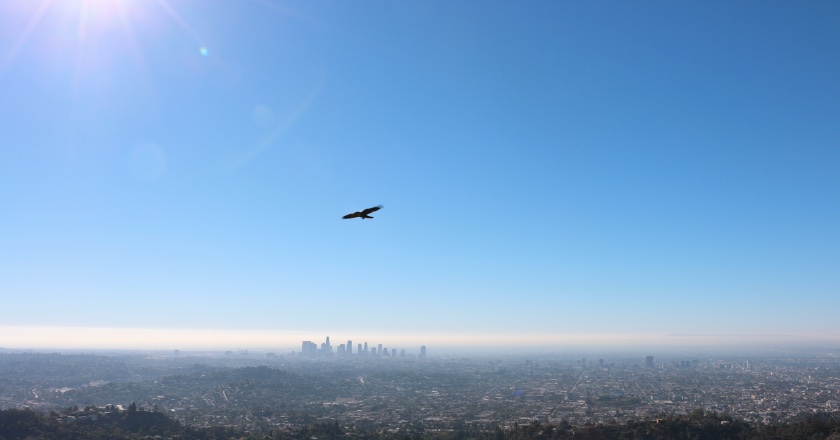 Bird in flight in Griffith Park with the DTLA Skyline in background. Credit: Brian Champlin

There are still tickets for a panel discussion on the design process of the new contemporary art museum in DTLA with Elizabeth Diller, principal-in-charge from Diller Scofidio + Renfro, philanthropist and museum founder Eli Broad, and The Broad’s Founding Director Joanne Heyler, moderated by architectural critic Paul Goldberger.

Beginning this Monday, the West Hollywood multilevel Asian Eating House will debut a new weekday “We Love Melrose” Happy Hour. From 5:00pm – 7:00pm, Monday through Friday, locals can sip on $5 drinks, nosh on complimentary Cassava chips, while soaking in views of the sunset atop the expansive 5,000-square-foot L.P. rooftop.

Latin-inspired restaurant Bow & Truss has a wine and cheese event series every first Monday of each month. The Wine & Cheese Night will feature a special wine and cheese tasting with wine expert Chuck Novak guiding guest through the experience.

It really doesn’t get any better than this on for a beer drinker on a Monday. Come into Bar ONE in North Hollywood and sample anywhere from 4-6 beers on their mystery menu all for $3.

7. Celebrate The Day Of The Dead At The Iconic Olvera Plaza

There are a bunch of free ‘Day of the Dead’ activities at Olvera Plaza till November 3, 2015.

Free family nights at the Kidspace Children’s Museum happen’s every first Tuesday of the month from 4:00pm. to 8:00pm.

Come on down to the Echo Park Film Center and share your film and give thanks for the cinematic community. Sign up for an up-to-10-minute maximum limit time slot, one film per filmmaker. First come, first screened. DVD, VHS, mini-DV, DV-CAM, Super 8, standard 8mm, 16mm are all welcome.

Katsuya is collaborating with the ABC Television series The Muppets. Beginning Tuesday and continuing throughout the rest of the week, Executive Chef Katsuya will debut The Miss Piggy Roll and the Kermit Roll available at all Katsuya locations in L.A.

Join EB’s Beer & Wine at The Original Farmers Market every week for Tuesday Trivia Nights. Test your trivia skills out for a chance to win free drinks and more.

This week’s installment of Doug Benson’s Movie Interruption Doug and a couple of his funny friends will watch Will Smith’s Hancock from the front row with mics in hand ready to blurt out whatever thoughts they have in their heads.

20. The Ancient Forest At Descanso Gardens

21. The Little Mermaid Returns To The El Capitan Theatre

A limited run of Disney’s Academy Award-winning film “The Little Mermaid” from November 5- 22, 2015. Before and after the movie, El Capitan guests will be greeted by Ariel, live on stage. The El Capitan will also host a special opening night screening this Thursday. More information and discount tickets via Goldstar.

24. Only in Hollywood Music + Arts Festival

A massive neighborhood festival is coming to Hollywood with over 100 live performances at dozens of venues and five pop-up art galleries on November 5 through 8.

The folks from Grand Performances continue their FREE fall movie series with a screening of The Artist at California Plaza in DTLA.

27. A Movie Screening Fundraiser to Save Angels Flights

On November 5 the Angels Flights Foundation is throwing a fundraiser / movie screening of the 1951 Film Noir classic “M” at the Million Dollar Theater in downtown L.A.

The popular screening series that has already held court in London and New York is now here in Los Angeles! For each screening of the Rooftop Film Club series organizers will set up rows of lawn chairs on the roof of the Ricardo Montalbán Theatre and provide headphones for each attendee. Doors open at 6:00pm with screenings starting at 8:00pm. Breakfast at Tiffanys on Thursday and Casablanca on Friday.

Every Thursday night from 6:00pm to 11:00pm in the Playhouse District of Old Town Pasadena, join a crowd of locals gathering for live music and food trucks. This week brings the Crepe n Around and Belly Bomz truck to Old Town. Get more info on the official Facebook page for the event.

32. Sleepless: The Music Center After Hours

On Friday, the Music Center’s after-hours party series returns for its second event of the year. It’s called Sleepless and it will feature a huge list of fun activities including multiple spaces and floors filled with live DJs, lighting installations and even sound baths.

33. Free Day At The Pasadena Museum Of Art

The fifth annual LAMVF is happening Friday through Sunday. A series of panels, speakers and screenings curated from over 600 submissions from 35 countries. Kimbra will give a keynote address and tickets are $12 a session with an option of a weekend pass for $40. Happening at The Silent Movie Theater.

This international conference will take place at The Hammer for two days (6th-7th) and will focus on the subject of public engagement. The FREE symposium will convene a group of experts to consider ongoing practices initiated by artists and museum professionals that are designed to engage the public. Tickets based on a first come first served basis. For more information and a schedule of discussions visit the hammer museum site.

On the first Friday of the month head down to Abbott Kiney Blvd. in Venice Beach for tons of food trucks, open galleries and late-night shop hours. Get more information via the official event blog.

The Norton Simon Museum has free admission from 5:00pm to close this Friday. On view is European art from the Renaissance to the 20th century, a stellar collection of South and Southeast Asian art spanning 2,000 years to Modern and Contemporary Art from Europe and the United States.

An art walk, dining and shopping experience where participating businesses in the Long Beach neighborhood of Bixby Knolls businesses unite to promote local artists and musicians through extended operating hours. Fun for all-ages… and free!

The James Beard Foundation’s Taste America is stopping in Los Angeles for a night of cocktails and dining at the Wilshire Ebell Theater. Tickets start at $100 for the cocktails and tasting reception with a lineup of Los Angeles finest chefs including Ray Garcia, Timothy Hollingsworth, Michael Hung, Jessica Koslow and Zach Pollack. A  separate four-course seated dinner designed by James Beard Award winner Hugh Acheson and Local Stars Jon Shook, Vinny Dotolo, hosted by Chef Louis Pechan of Animal is also available for $275.