This week, from Monday, May 23 to Friday, May 27, features the Time Out Los Angeles Bar Awards, a May Mix-Off final showdown, a new Whole Foods in Silver Lake, the Strawberry Festival in Garden Grove, a board game expo, and lots more. 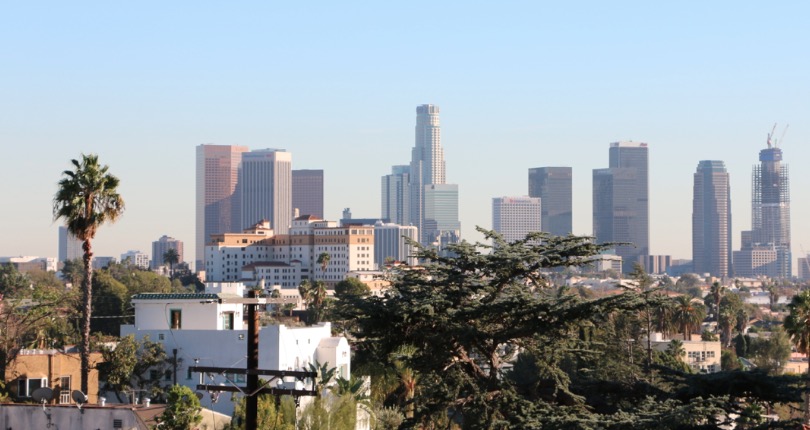 A view of DTLA from the hills of Silver Lake. Credit: Brian Champlin / We Like L.A.

Kick off your week with one of the best weekly magic shows in Los Angeles, now playing at the Santa Monica Playhouse. Be sure to grab discount tickets for show via our friends at Goldstar.

Come on out to Angel City Brewery in DTLA’s Arts District as they host one epic game night that includes 15+ Board Games, 8+ beers on tap, a 3-round cornhole Tournament and one geeky host.

Award-winning Documentaries at the Skirball

Skirball Cultural Center is hosting a film series on the fourth Tuesday of every month (April-August) that will feature 2016 award winning documentaries from SIMA, the Social Impact Media Awards. This month The True Cost will be screened. Each evening will include a panel discussion with filmmakers. Admission is $10 for general admission, $8 for members and $6 for students.

Imagine this… you are locked inside a mysterious laboratory of an ancient alchemist where you’ll have one hour to uncover the hidden power of the Philosopher’s Stone in order to escape the room. Sounds like your kind of event?  Visit Escape Room L.A. and bring your A game this escape room requires critical thinking, creativity and plenty of teamwork. Get more information and discount tickets via Goldstar.

Join Brian Posehn for a live version of his podcast as he plays in a round of Dungeons & Dragons with pals Patton Oswalt, Chris Hardwick, Brendon Small and others for a benefit show to support comedian Dan Telfer’s cancer battle.

Escape Room LA invites you to get trapped inside a creepy theater haunted by a ghost. The only way out is to uncover clues and puzzles that will lead you to create a magical spell and release the ghost before time runs out. If you fail you will be trapped in the theater forever. Game? For more information and discount tickets  this week check out Goldstar.

The May Mix-Off Bartending Competition

Hosted by the Mixing Room at the JW Marriott at L.A. LIVE, this three-week competition includes bartenders and mixologists from Los Angeles’ most notable bars, restaurants and lounges. The final is this Wednesday, admission is free and complimentary tastings will be available to guests.

Picture you’re trapped inside a 1940’s film noir where you have to solve a slew of mysteries to escape by working with your fellow detectives as you race against the clock. Do you have what it takes? Head over to Escape Room LA and test your sleuthing skills. Get more information and discounted tickets for Wednesday and Thursday via Goldstar.

The first 365 Whole Foods will finally open in Silver Lake this Wednesday. The first 100 shoppers will receive gift cards in varying amounts and the first 365 guests will receive free mini-scones, vegan cookies and reusable shopping bags.

The Unauthorized Musical Parody of The Big Lebowski

Watch the Coen Brothers’ classic comedy The Big Lebowski in musical form now through July 22 at The Rockwell Table & Stage. Get more information and discount tickets via Goldstar.

COFFEE + Design panel at The Wheelhouse

AIGA Los Angeles is hosting a COFFEE + Design panel at The Wheelhouse in Downtown LA. Moderated by journalist Julie Wolfson and joined by a panel of coffee industry and design professionals they will discuss all aspects of designing a high quality coffee experience in Los Angeles a city full of coffee addicts.

This sketch comedy show is based on town hall meetings each taking place in a new town every month but in reality its always in L.A. This month, they are taking on Pocomoke City, Maryland a place dubbed “The Friendliest Town on the Eastern Shore.” Show takes place at The Copper Still Bar, admission is $5 at the door.

Throwback Thursdays Screening of American Me

PaleyLive LA: An Evening with Orange is the New Black

Join The Paley Center for Media and the cast and creator of Orange is the New Black as they discuss the evolution of the hit series and what to expect from the upcoming new season launching on Netflix June 17.

Bruce Springsteen: A Photographic Journey is a traveling photo exhibit curated by the GRAMMY Museum at L.A. LIVE. The new exhibition features over 40 iconic images of Bruce Springsteen on view for only a month.

Outtake-O-Rama: The Voice Talents of Futurama

John DiMaggio, Billy West and Maurice LaMarche are best known as the voices of Futurama characters see some of their infamous outtakes at the Hollywood Improv this Thursday.

Free Shark Lagoon Nights At The Aquarium of the Pacific

This all-age annual convention (May 27-30) focuses on tabletop games and draw crowds of over 2,000 to learn, play, watch and buy a wide variety of board, card, miniature, role-playing, collectible and video games. There’s a enormous shopping hall, tournaments,  Gaming 101 sessions, 700+ game library, live entertainment, a miniature painting area and even special activities for families.

Disney’s Alice Through the Looking Glass 3D, Plus Pre-Show at El Capitan Theatre

Join Alice, the Mad Hatter and the rest of the colorful characters in Tim Burton’s Alice in Wonderland sequel Alice Through the Looking Glass. The film will be shown in 3D, come early for a pre-screening light show and to view the costumes and props from the movie. Get more information and discount tickets via Goldstar.

This hilarious improv show by the cast of the Groundlings’ Main Company runs on audience suggestions which can get interesting. Get more information and discount tickets via Goldstar.

Join the city of Pasadena every Friday this month for Sounds on South Lake, a free outdoor music series featuring a variety of SoCal artist and big names in the music industry.

The Museum of Latin American Art is free from 5:00pm to 9:00pm this Friday.