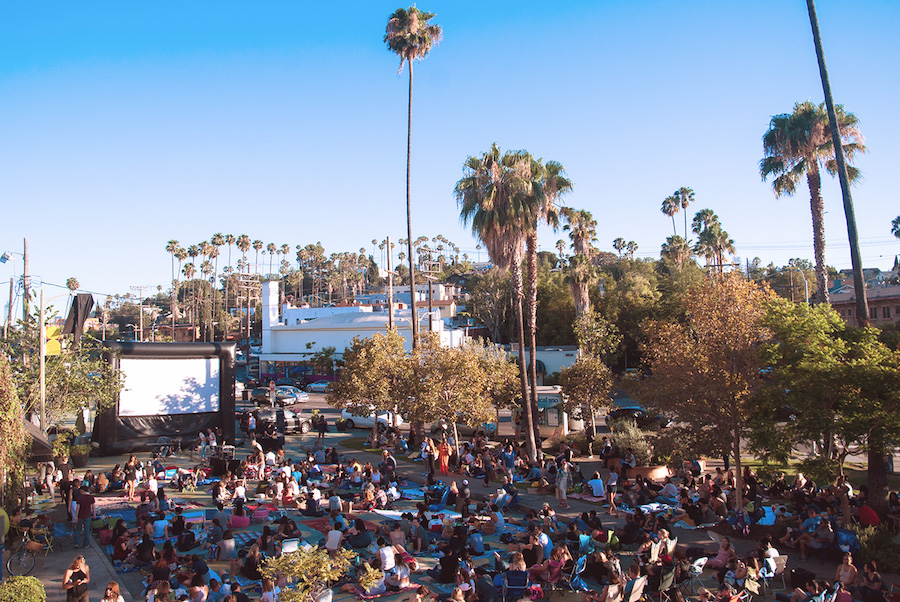 1. On the third Monday of each month Alcove in Los Feliz will host a free movie screening under the stars with tricked out themed cocktails and food specials. This week they kick off the series with Romeo & Juliet.

2. The team from Smoke and Mirrors aims to add a little razzle-dazzle to your Monday monotony by showcasing a rotating cast of award-winning magicians at The Santa Monica Playhouse.

3. Vagabond Cheese Company and Angel City Brewery team up for Ale Academy Beer and Cheese Edition. The beer-pairing series will show you ways beers and cheese can work together to create delicious results.

5. Head to iOWest for Queer Window, a variety show where performers take a deep dive into the past and the present of the LGBTQ community and culture. The show will feature Ira Madison III, Jurni Rayne, Zach Noe Towers, Sarah Hoffman, and a queer edition of the L.A. Slurring Bee.

6. The Moonlight Movies on the Beach series is back for 2017 with a screening of Secret Life of Pets at Granada Beach. FREE

7. People Power film series at the Hammer Museum feature films that examine grassroots political movements around the world. This weeks screening is Amandla!: A Revolution in Four-Part Harmony. Winner of the Audience Award at Sundance in 2002, this soul-stirring documentary uses exclusive interviews and rare film footage to document the vital role of music in the nearly half-century struggle against apartheid in South Africa. FREE

8. Spend an evening poolside and beneath the stars enjoying dinner, cocktails and a classic film as Mr. C’s Poolside Cinema returns with a screening of Chocolat.

10. Grand Park is ready to whip you into shape during their Summer Bootcamp series happening every Tuesday evening from 5:30 to 6:30 p.m. All fitness levels are welcome! FREE

12. Honor World Refugee Day with a night of knowledge and a performance of traditional Syrian music by SAVICTO, with thanks to IKAR’s Refugee Support Group and Beth Chayim Chadashim in Mid-City.

14. The Skirball Cultural Center is hosting Make Music Day at the museum in conjunction with an international celebration encompassing more than 700 cities and 120 countries around the world. The festival is also part of the citywide celebration, Make Music Los Angeles.

16. Taste of Grand Central Market is a 1.5 hour guided food tour of the historic open air food hall. Your guide will help you navigate the dozens of stalls while sampling from vendors both old and new. DISCOUNTED (via Goldstar)

18. The Super Serious Show is a comedy event produced by CleftClips featuring both established and up-and-coming talent performing an array of stand-up, sketch and musical comedy. Happening at The Virgil.

19. Designed for participants to explore Culver City, the 6th Annual Spiked Lemonade Tasting event provides folks with ‘passports’ to be used for redeeming lemonades at different stops in the city. With historic buildings, boutiques, theaters, galleries and unique restaurants Downtown Culver City is a hidden gem in Los Angeles just waiting to be discovered and this Wednesday you can do it with lots of free lemonade. FREE

20. The Wiltern will screen Fight Club with a live musical score and music performed by special guests, Gabriel McNair (No Doubt), Angel Roche (musician and former bandmate of Dave Navarro) and more. Check for discounted tickets before making your purchase. DISCOUNTED (via Goldstar)

22. KCRW’s 2017 edition of Summer Nights is a free all ages outdoor music series happening throughout the summer. This Tuesday they’ll take over the Santa Monica Pier with Khalid + Bibi Bourelly. FREE

23. Shakespeare By The Sea returns with free performances for the summer. This week (June 22-23) they’ll be performing Macbeth at Point Fermin Park in San Pedro. While admission is free encourage donations to help support the play. FREE

24. The Levitt Pavilion in McArthur Park continue their annual free concert series this week with Leche on Thursday and Tank And The Bangas plus Sweet Crude on Friday. FREE

30. The L.A. Zoo’s annual Roaring Nights, is back with an awesome assortment of music, food trucks, animal encounters, new exhibits and more. This weeks theme is 60’s Safari Night! DISCOUNTED (via Goldstar)

31. City of Monterey Park presents Summer Movie Nights a movie series taking place at five different parks in Monterey Park during the summer. This week they will screen Rogue One at Garvey Ranch Park. FREE

32. Constitution Happy Hour at AMMO at The Hammer continues this Friday with a focus on the question “Can we achieve racial justice under the Constitution? ”

35. Take a Downtown Los Angeles foodie walking tour and savor what the bustling neighborhood has to offer. The tour is three hours long, participants will stop at six popular spots to eat and the tour guide will take folks through the history of DTLA. DISCOUNTED (via Goldstar)

37. The Groundlings: The Completely Different Late Show is a hilarious improv show by the cast of the Groundlings’ Main Company. Audience shout suggestions throughout the night for improvisational scenes performed by some of the best in the business. It’s also a testing ground for brand new material for the Groundlings’ main show. DISCOUNTED (via Goldstar)

39. Black Rabbit Rose, part theater for magic and variety acts and part craft cocktail bar, takes you into their retro-style cabaret shows set in an intimate and mysterious setting. DISCOUNTED (via Goldstar)

40. Last by not least, it’s “Take Your Dog To Work Day” a worldwide event celebrating man’s best friend by bringing them along to work. We suggest consulting with your boss before actually bringing Fido to your work place. 😉