This week, from Monday, August 28 to Friday, September 1, features an End of Summer Festival at Descanso Gardens,  L.A. Times The Taste, the return of the LA County Fair, First Fridays, and MUCH more. 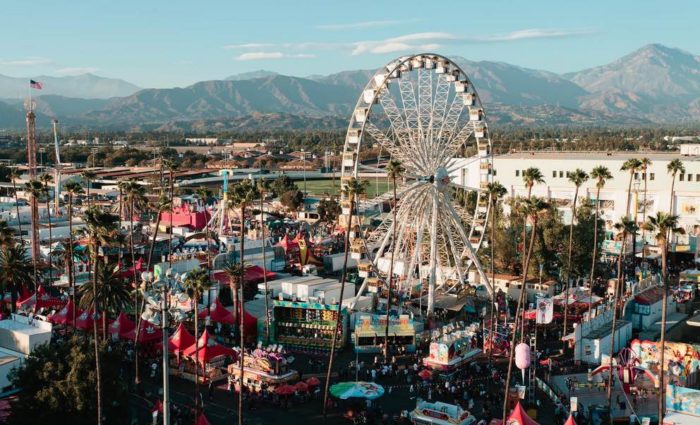 2. Hot Tub With Kurt And Kristen at The Virgil is one of the most popular weekly variety shows happening on a Monday in Los Angeles.

4. The Business LA is a free comedy show at Little Joy featuring some of the best local comics in town. FREE

5. The folks at Rooftop Cinema Club are back with two screenings at their rooftop locations. Get Out at LEVEL in Downtown Los Angeles and Grease at Montalban in Hollywood.

6. Down some tacos, drink some locally brewed beers and test your trivia skills this Tuesday during Tacos & Trivia night at Angel City Brewery in DTLA.

8. Schmabaret! a raunchy comedy cabaret starring Adam Ceschin and Carolyn Jania will take over Bar Lubitsch in West Hollywood for a night of original comedy songs in all genre stylings covering taboo topics and recently the ridiculous political climate.

9. Greet fall with a party during The End of Summer Festival at Descanso Gardens. Enjoy Patina food and drink, crafts, the Flash Dance DJs, and the beauty of the gardens at sunset.

10. Enjoy some free Shakespeare this summer when the Independent Shakespeare Co. returns for the 8th year in a row with free/donation-based performances at the Old Zoo in Griffith Park. The Two Gentlemen of Verona Wednesday through Sunday.

11. Get some laughs in this Wednesday with Boss Jr. and their team of hilarious improvisers. Bonus they also give out free baked goods! Happening at UCB Sunset.

12. The Hammer Museum’s new series Shake It Off offers dance themed films all August. This week they will screen Stomp the Yard on Wednesday.

13. The folks at Rooftop Cinema Club are back with a screening of All The Presidents Men at Montalban in Hollywood.

14. The Slurring Bee makes its way to The Virgil this Wednesday for a bar spelling bee with a money prize, bee-themed prizes and guaranteed slurring if you choose to participate.

15. Tales from Tinseltown is a new storytelling show hosted by Megan Hayes (Hunger Games, Sleepy Hollow) and Oscar Sagastume (Multiple Moth Winner, Buzzfeed). Performers share some of Hollywood’s dirty secrets and maybe a few of their own. Tickets cost $5.

16. The Hammer Museum’s new series Shake It Off offers dance themed films all August. This week they will screen Magic Mike XXL on Thursday.

17. Angels Flight will return to service on August 31 with formal remarks at 9:30 a.m. from Mayor Eric Garcetti and others. The cost of a ride will be $1 and less with a TAP card.

18. The 2017 season of the Skirball’s free Sunset Concert Series, inspired by the Skirball’s current high-profile exhibition Paul Simon: Words & Music, is a showcase for up-and-coming talents and established artists from Los Angeles and around the globe. The series continues with Betsayda Machado y La Parranda El Clavo. FREE

19. The folks at Rooftop Cinema Club are back with two screenings of Beauty & the Beast at LEVEL in Downtown Los Angeles and at Montalban in Hollywood.

20. Summer of Music at Redondo Pier host free concerts every Thursday and Saturday highlighting a slew of genres. This week Strange Days a Doors Tribute band will perform. FREE

22. Take in a few laughs at the Deco Bar inside the historic Hollywood American Legion Post 43. The evening will feature a full bar, today’s best comedians, free parking and tours of the Art Deco building featured in “The Shining” and “Star Trek” (2009.) The show costs $5 for non-members to attend and goes directly to Post 43 to benefit veteran affairs, as does anything you spend at the bar.

24. The Los Angeles Times, The Taste returns to Paramount Studios Sep. 1-3 for five amazing food-centric events with some of L.A.’s best chefs, restaurateurs and mixologists over Labor Day weekend.

25. Vegan Street Fair Nights returns on September 1-2 in North Hollywood at The Federal with local vegan and vegan-friendly restaurants and vendors serving up delicious plant based eats. The party will also feature a laid-back backyard party vibe with a beer garden, live music and over-sized lawn games.

26. The LA County Fair takes over the Fairplex in Pomona from Sep. 1-24 with fair-style foods, live musical performances, carnival-style games, rides, and unique attractions such as an expanded farm section (over five acres) featuring tons of interactive agricultural experiences for guests to enjoy.

28. The folks at Rooftop Cinema Club are back with a screening of Pulp Fiction at LEVEL in Downtown Los Angeles and The Nice Guys at Montalban in Hollywood.

29. Since its the first Friday of the month check out all the cool events happening around town including block parties and art walks for First Fridays.

30. The Griffith Observatory hosts a monthly forum where some of the most amazing phenomena in the known universe are explained and discussed. It’s called All Space Considered and it takes place on the first Friday of every month. FREE

31. Metro Art in collaboration with the LA Opera presents a sampling of Georges Bizet’s classic opera “Carmen,” this Friday from 5 to 7 p.m. at the Historic Ticketing Hall of Union Station. Guests will be transported to the south of Spain into one of the world’s most beloved operas “Carmen.” Free and open to the public, the performance will feature flamenco dancers, a Spanish guitarist and arias from the upcoming L.A. production. FREE

32. Take a Downtown Los Angeles foodie walking tour and savor what the bustling neighborhood has to offer. The tour is three hours long, participants will stop at six popular spots to eat and the tour guide will take folks through the history of DTLA. Happening Friday and Saturday. DISCOUNTED (via Goldstar)

33. There’s a BeyDay party going down at The Reserve in DTLA to celebrate Beyoncé’s birthday. Expect b-day surprises, dancing and singing all night long. FREE

34. Friday kicks off LA Fleet Week (Sep. 1-4) at the LA Waterfront in San Pedro. Come and marvel at ships and partake in marine activities, many of which are all-ages and have no admission fee.

35. LACMA’s award winning Department of Music Program provides hundreds of free concerts and musical events every year for Angelenos to enjoy. This Friday their jazz series continues at the BP Grand Entrance.

36. 626 Night Market comes to Santa Anita Park from Sep. 1-3 for the largest Asia-themed night market in the United States. It will feature food, merchandise, crafts, arts, games, music, and entertainment.