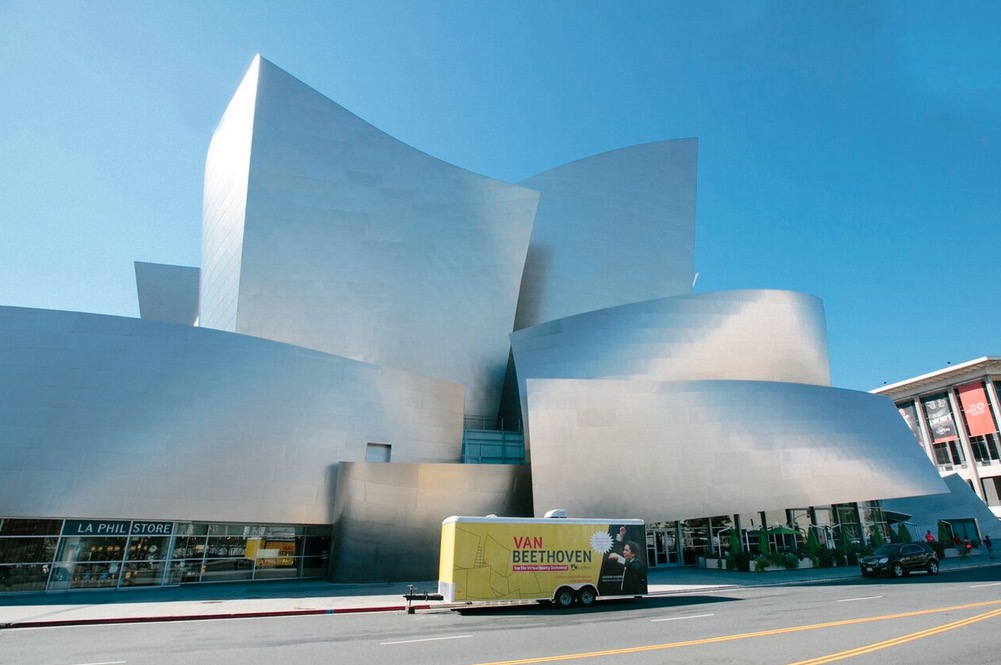 The Walt Disney Concert Hall is bringing classical music to you! Board the VAN Beethoven mobile experience, touring Los Angeles starting Friday in front of the Walt Disney Concert Hall. Put on the Oculus virtual reality headset and be transported to a 360° 3-D performance featuring the opening of Beethoven’s timeless Fifth Symphony performed by the LA Phil, and conducted by Music and Artistic Director Gustavo Dudamel. VAN Beethoven, is a virtual reality project touring around LA in September through October in different locations of the city.

Over the week of September 9-15 you can catch a sneak peak of the fall’s most anticipated new shows during screenings at the Paley Center for Media in Beverly Hills. Get more information and discount tickets (while supplies last) via our friends at Goldstar.

This week through Friday, Pop Physique is offering free classes to celebrate its new location. The schedule which include classes led by Pop Physique co-founder Jennifer Williams can be found on Pop Physique’s sign up/RSVP page.

The popular screening series that has already held court in London and New York is now here in Los Angeles! For each screening of the Rooftop Film Club series organizers will set up rows of lawn chairs on the roof of the Ricardo Montalbán Theatre and provide headphones for each attendee. Doors open at 6:00pm with screenings starting at 8:00pm. The Goonies will screen on Friday and Top Gun on Saturday.

Few events combine live music, art, agricultural attractions, farm exhibits, and more fried food than your arteries can handle, but it’s all part of the LA County Fair, running until September 27. More information and discounted tickets can be found via Goldstar.

11. Ice Cube and Friends At The Queen Mary

Ice Cube is back on the West Coast and he brought some music heavy hitters with him. Riding on the wave of success of his recent bio pic Straight Outta Compton, Ice Cube comes to Queen Mary Events Park in Long Beach for a one night performance along side two-time Grammy winner T-Pain, songstress Ashanti, hip hop artist Baby Bash and Straight Outta Compton rappers 2nd II None. More information and discount tix available via Goldstar link above.

Brace yourself a really big SALE is coming your way! The Saturday Sale at the California Market Center is open to the public with slashed prices of  50 to 80% off tons of contemporary brands.

Supahcute is proud to present Small Adventures A Serious & Silly Tribute to Maurice Sendak & Shel Silverstein at Leanna Lin’s Wonderland. Opening on September 12, this group exhibition features works inspired by two of the greatest children’s book authors of all time.

18. Eat|See|Hear Screening Of The Princess Bride

The Eat|See|Hear Summer Movie Series (winner of L.A. Magazines Best Outdoor Movie Series), is in full effect! This weekend they will be screening The Princess Bride at Centennial Square at Pasadena City Hall. Free parking, awesome food trucks and live music round out your night. Bring your dog they even give doggy biscuits at the door!

Take an exclusive look inside eight modern homes in Venice, Santa Monica and Hermosa Beach thanks to the folks over at Modern Home Tours. Drive to each location where your ticket will allow you access into each house where its homeowners and architects will be waiting to give you a tour.

Barnsdall Park is bringing it’s fall outdoor screening series to help fund raise funds for the park’s capital projects, art programs, historic renovations and gallery exhibitions. Each event will include pre-screening tunes spun by D.J. youNGNoon from 5.30pm till dusk, plus a selection of wines per Dark Horse Wines as well as several local food trucks (TBD) on hand to make sure no one goes hungry. This week’s movie: Shaun of the Dead.

The Hammer Museum invites the community to have fun making art, experiment with a variety of art materials all alongside contemporary artists. The afternoon will include artist workshops, music, and more!

The Abbot Kinney Marketplace is a weekly free outdoor marketplace located on the front athletic field of Westminster Elementary. The marketplace which is organized by a family of artistic individuals, was put together so that artist, designers, craftsmen, and more can come together and have a platform to sell their pieces. They also have food trucks and different dj’s who participate weekly. This weekend apparel from Line & Dot , Gypsy05 and Madison Harding footwear will be having a sale at the market with discounts as steep as 70%. A percentage of the proceeds go to funding school art and after school programs.

23. The Lord of the Rings Trilogy

Watch the entire Lord of the Rings trilogy in one sitting at The Aero in Santa Monica. Presented by the American Cinematheque and TheOneRing.Net, a discussion will follow the first feature with executive producer Mark Ordesky, moderated by Cliff Broadway of TheOneRing.net. There will also be special video messages from actors Andy Serkis, Cate Blanchett and Sala Baker plus trivia contests throughout the day for prizes!

Sounds of LA is a monthly series of free concerts in the TASTE Food Hall Courtyard at Fig at 7th in DTLA. KCRW DJs spin tunes and host the monthly shows, this week artist Sam Marsey and Arron Bryd will provide the entertainment.

25. Sharknado 3: Oh Hell No! At The Burbank International Film Festival

The Burbank International Film Festival will present the director’s cut world premiere of Sharknado 3: Oh Hell No! including extended scenes, surprises, and a Q &A with stars of the film at the AMC Burbank Town Center 6 on Saturday at 8:00pm. Tickets are $20 and include the KILLER Afterparty which will showcase actual props from the film.

There is nothing better than an outdoor movie screening to wind down the summer here in Los Angeles. The Rooftop Cinema Series in Pasadena, is a free open air movie screening taking place along South Lake Avenue. Now in its third year, the complimentary movie series presented by the South Lake Business Association will screen Avatar this weekend. Each screening will be paired with a family friendly atmosphere and unique food trucks. Guests are encouraged to arrive by 6:00pm to enjoy the resident DJ and activities such as neon airbrush artists, glitter tattoos and ping pong. Movie starts at 8:00pm and parking is free!

Chef Suzanne Goin, Caroline Styne and David Letz will host the L.A. Loves Alex’s Lemonade event this year. The day-long cookout brings top chefs from across the country together for on tasty event where all the proceeds go directly towards awareness for children’s cancer. Some of the celebrity chefs participating include Giada De Laurentiis, Ludo Lefebvre and Ray Garcia.

30. War and Peace in 60 Minutes At Stage Sundays

Watch Brad Griffith as he attempts to tell an audience the entire story of War and Peace, in 60 minutes at Stage Sundays at Angel City Brewery with The Interrobang Departure. Seen at the Hollywood Fringe Festival this particular event will have a humble suggested donation at the door.

One of the biggest and most popular flea markets in California is located in Pasadena inside of the Rose Bowl. Yup it is literally THAT big. Held on the second Sunday of each month the Rosebowl Flea Market has everything you can imagine; $5 vintage tees, hard to find vintage jewelry and furniture is only the tip of the iceberg.

32. The Final Red Sun BBQ Of The Summer

Katana will host its final Red Sun BBQ of the Summer, featuring a selection of new food and drink specials exclusively for the last evening of the series, including Scallop Toban Yaki with soy yuzu butter, Lobster Roll with truffle mayo in a Hawaiian bun and Asahi beer towers. The weekly patio celebration features a new three-course Yakiniku menu ($45 per person) of marinated Japanese meats such as New York Strip, Chimichurri Shrimp, and Short Ribs grilled at the table over 1,000°F Bincho charcoals. The sunset soirée is also accompanied by a DJ and festive lights and décor.