For many people eating an In-N-Out hamburger is a religious experience. An act of worship, if you will.

The zealotry associated with hardcore fans of In-N-Out is legendary. It’s also the key reason the chain doesn’t even have to market themselves anymore.

Word of mouth is the best form of advertising, and the In-N-Out faithful are never shy about letting you know just how awesome their hamburger of choice really is.

While I wouldn’t say I’m quite on that level, I have been eating In-N-Out hamburgers for some two decades and consider myself to be an avid fan, both of the food and the brand.

So when I found out that they had recently constructed a replica of the original In-N-Out drive-thru stand, I knew I needed to find a way to investigate for myself.

This week I finally set aside some time in my schedule to make a pilgrimage to Baldwin Park to check it out.

Below is what I learned.

So this is what #innout used to look like… And yes, those burgers are priced for a quarter each!!! #mydayinla #losangeles #lafoodie #baldwinpark #nomnomnom #welikela

The History of the First In-N-Out Locaion

On October 22, 1948 at 4:15pm the very first In-N-Out location opened its doors to the public at the intersection of Francisquito and Garvey in Baldwin Park, CA.

Just six years later the wheels of progress (what would  become the 10 freeway) forced a relocation of the original stand to down the street, and that newer spot stood for about 50 years until it was decided to shut it down and relocate again, this time just across the freeway overpass to a lot adjacent to the In-N-Out company store and training center.

That shuttered In-N-Out stood in abandon for almost seven years until it was completely demolished in 2011.

In 2014 the site of the rubble was reborn as the home of a replica of the original (1948) In-N-Out, which is where I found myself visiting earlier this week. 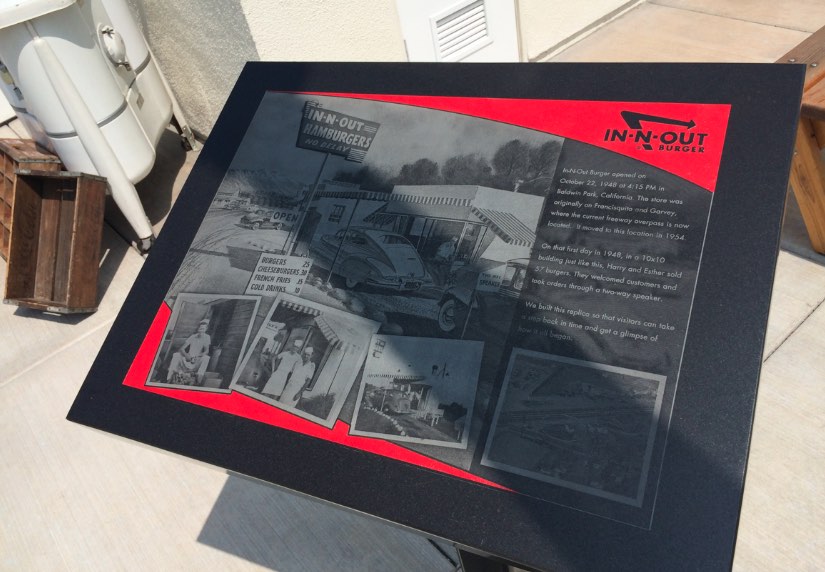 So what an you expect with a visit to the replica?

The first word that comes to mind is detail, from the familiar, classic, mid-century design aesthetic to the pricing on the signage, the cigarette machine (yup, they used to sell cigarettes at fast food chains), and vintage interior features such as the original potato dicer and cash drawer from the first location. There’s even reproductions of the fryer, refrigerator, and outdoor wash station to complete the vintage effect.

Let’s have a look at some of those… 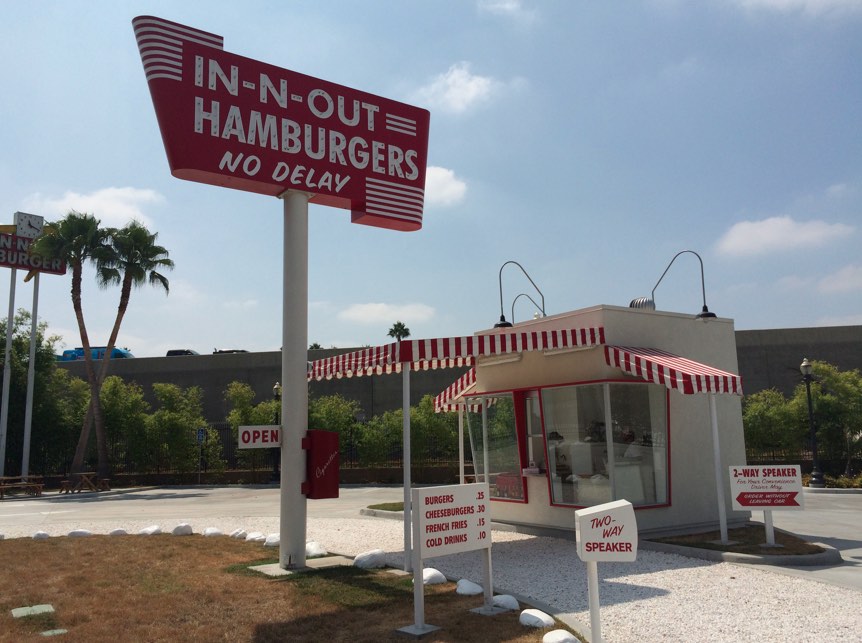 The In N Out replica at a glance. Credit: Brian Champlin 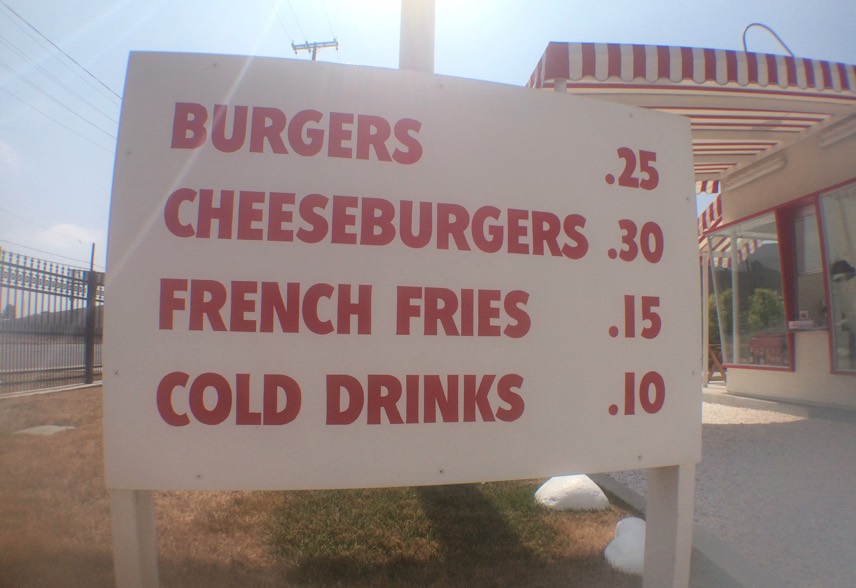 Those prices tho… Credit: Brian Champlin 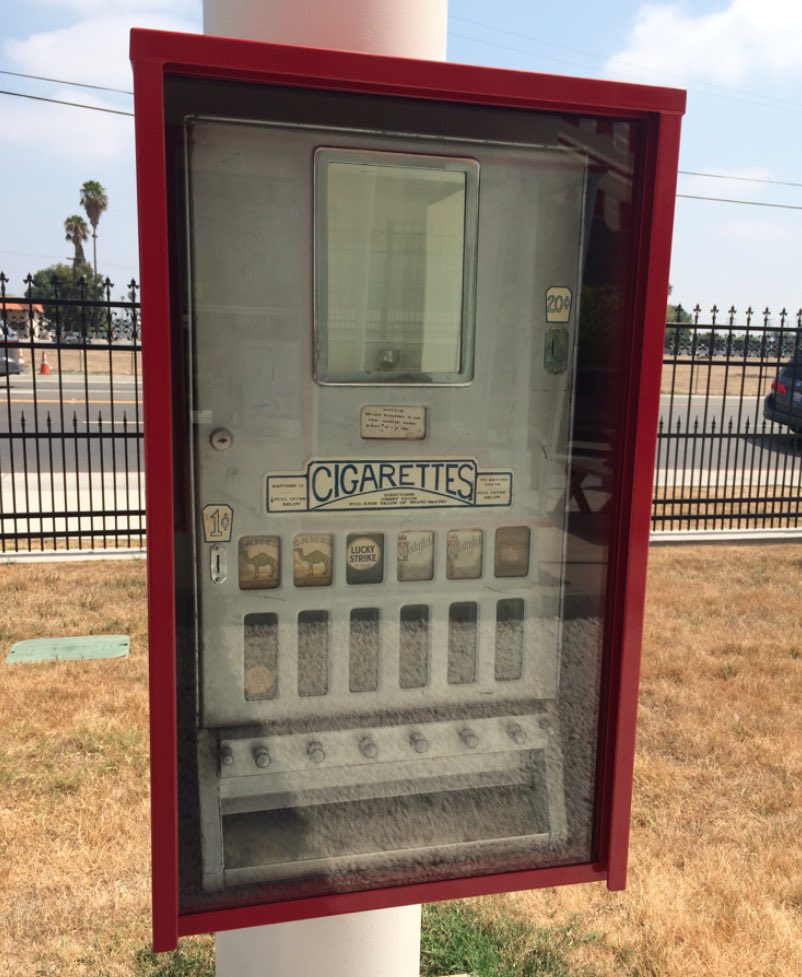 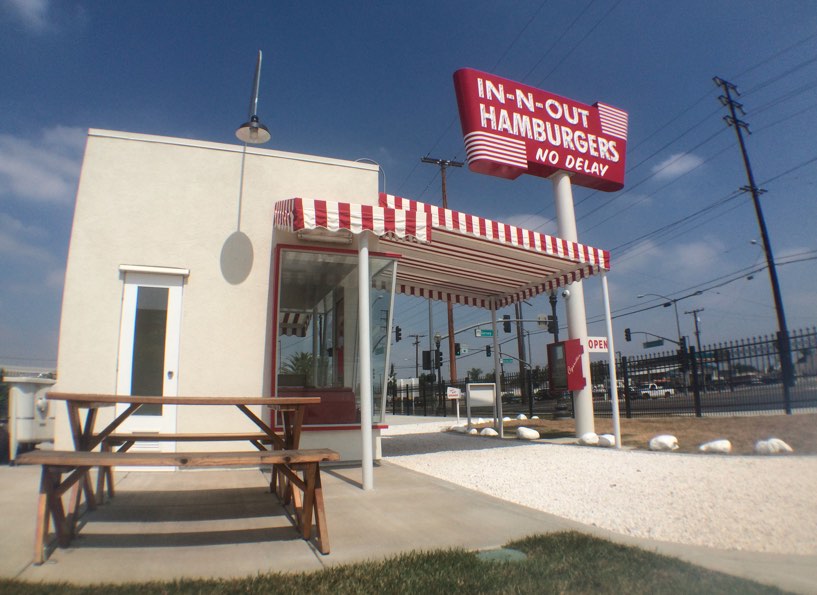 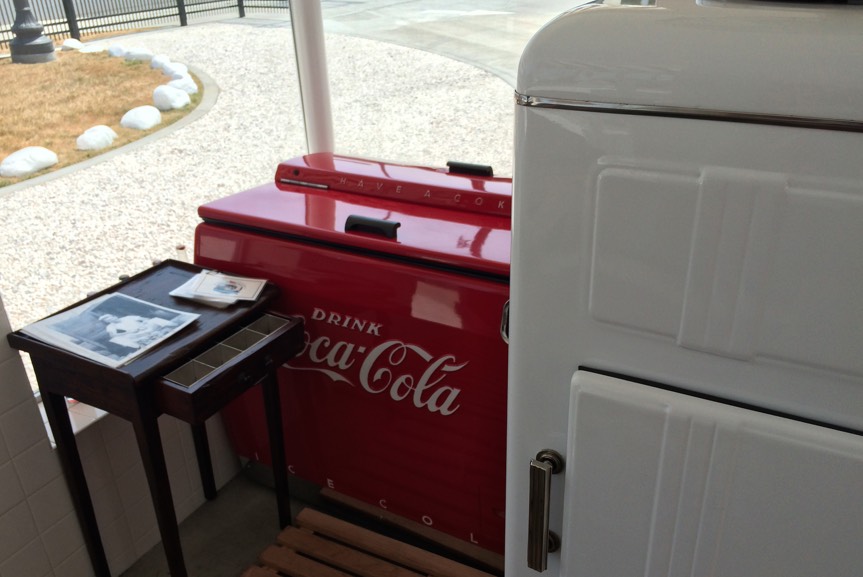 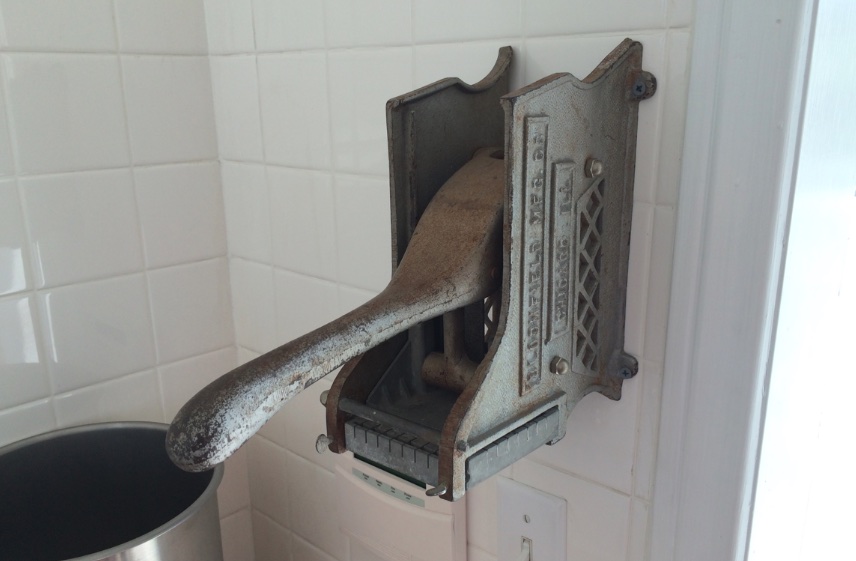 The vintage potato dicer they dug up from the In-N-Out storage facility was one of my favorite features. Credit: Brian Champlin 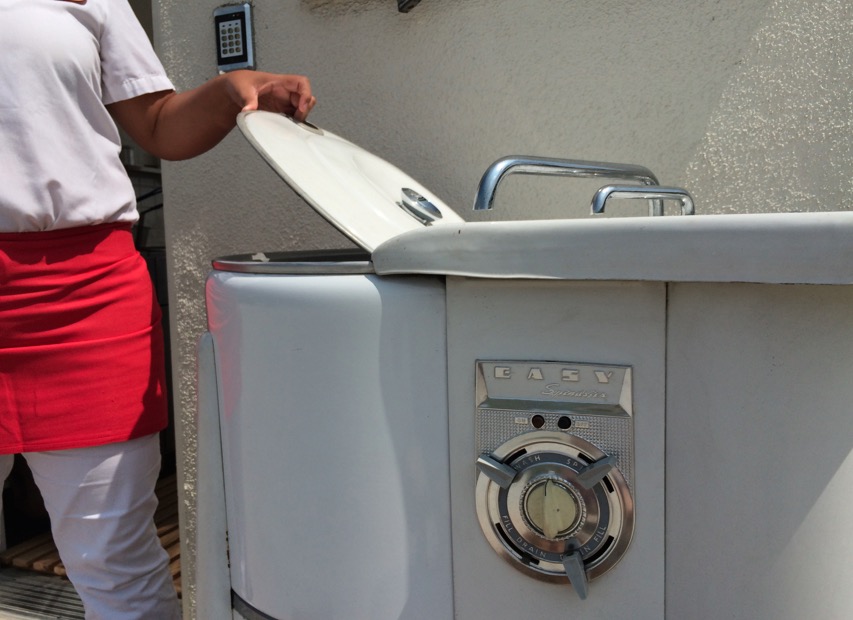 To avoid any water getting into the fryer, the potato wash station is outside the drive-thru shack. Credit: Brian Champlin

I think what I really enjoyed about the visit was the human element. As in, there is actually someone minding the store!

A extremely friendly and knowledgable In-N-Out employee named Karla (she deserves a raise imho) took careful time to discuss the history of the company, showed me around the modestly sized interior of the stand, and even indulged me as I went line-by-line through my secret menu list to make sure I wasn’t missing anything.

[NOTE: Just to re-confirm here, monkey style is not a legit secret menu item. You can put fries in your burger on your own if you want, but they’re not going to do that for you]

Karla also let me know that there is talk they may be expanding the replica location to include a bathroom so they could host more formal events, such as classic car meet-ups. If so, I think that would be an absolutely worthy usage of the space.

Visitors should take into consideration that the location is only open Thursday through Sunday, 11:00am – 2:00pm. If you stop by at any other time you’ll  be greeted with a locked gate that restricts your viewing to just observing from beyond a metal fence.

Ample parking is available on site, and an attendant isn hand during hours of operation.

Saturday and Sunday are going to busier, and summer time is always going to be more crowded than when school is in session.

Oh, and if you’re feeling in the mood for a double-double after your visit (likely) then just hop over the freeway to the nearby, fully-operational In-N-Out at 13850 Francisquito Ave., Baldwin Park, CA 91706.