13 Offbeat & Kinda Weird (But Cool!) Ways to Celebrate the Holidays in Los Angeles

This time of year is full of good cheer and decked halls but for those of you who want a little something off the beaten path (preferably without a constant stream of Christmas tunes playing in the background) then this list is for you.

The truth is sometimes you just need a break from the traditional festivities to indulge in a little craziness and decompress after Black Friday shopping and having to attend yet another Ugly  Christmas Sweater party (though those can be awesome too).

A lot of the following events feature Krampus, the mythical horned creature that punishes children who’ve behaved badly, a dark foil to the holly jolly Santa Claus. But not all that is unique on this list is dark so there’s something for those who like to poke fun at the uglier side of the holidays (tense family reunions, anyone?) or who want to watch Christmas films that aren’t “Love Actually” or “Elf”.

So for those of you on the naughty list, enjoy!

[RELATED: 20 Christmas Activities To Do In L.A. That’ll Help Bring Out Your True Holiday Spirit] 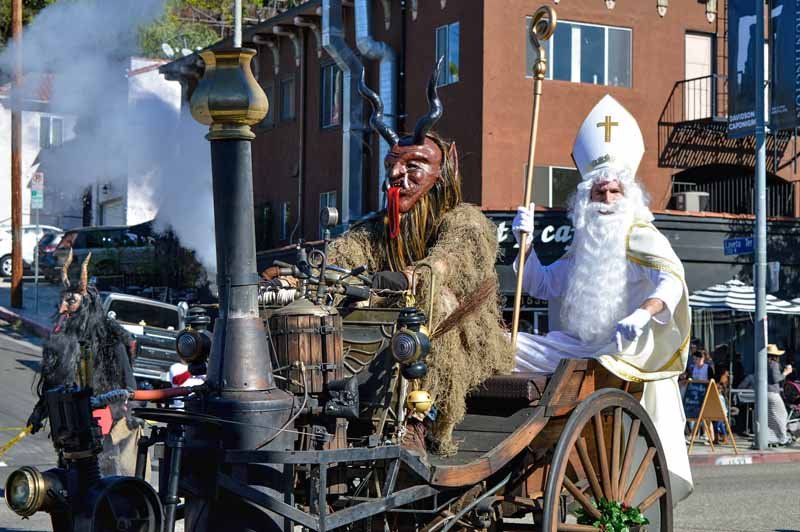 When the show includes the Ho Ho Ho dancers, Jewish Jello Shot, and a Shitty Nativity you know you’re in for an irreverent (in the best way) Holiday show. The setting is Janky High School and Pinky Claus and the Janky kids are auditioning in the hopes of impressing Kristmas Toedtman and the Janky Faculty Band, this year includes a new holiday song from Kristmas.

Humorist David Sedaris’ essay on his stint at a mall elf became so popular it led to his first big break with the publication of “Barrel Fever,” that’s how funny it is. Enjoy the adults-only show with a complimentary glass of champagne or non-alcoholic eggnog.

If there’s ever a moment where you’ll look around and think to yourself, “what is happening?” this show may provide that moment in the best way. The show is especially fun for “Die Hard” fans but even if you haven’t seen the action film it’s also chock-full of Christmas references.  There are puppets, and Christmas characters and also performances of Christmas classics – with a twist, natch- including “All I Want For Christmas is You.” Yippee Ki-Yay and Happy Holidays.

NOTE: Our friends at Goldstar have discount tickets for this show if you’re intersted.

Time to get the pole out of the crawl space!

What better way to celebrate the oft-overlooked holiday tradition than by visiting Seinfeld: The Apartment, a recreation of Jerry’s New York abode coming to West Hollywood starting on December 16, courtesy of Hulu (who recently acquired rights to all of the Seinfeld episodes). Guests will be able to peruse a beat-by-beat reproduction of Jerry’s domicile, crash through a door like Kramer, pose on a chaise longue like Geroge, but perhaps most importantly gather at the Festivus pole to air grievances or perform feats of strength (both Festivus staples).

One look at the horned creature and we’d all happily take a bag of coal for Christmas. That said, here’s a chance for some brave souls to attempt to escape the lair of the Krampus Killer with 45 minutes on the clock.

The Krampuslauf (meaning Krampus Run) is a major event in Austria so it’s only natural to marry L.A.’s own  Krampus Run with a major outdoor walking  event in L.A. For the first time ever members from the Austrian Moorpass (troupe) will make an appearance completely decked out in their best Krampus wear with traditional hand-carved wooden masks and animal hide. St. Nicholas will also make an appearance with Bay Area steampunk artist Kimric Smythe playing his Krampus chauffeur in a steam car cause a sleigh is too obvious a choice. There will also be food and special Krampus-themed beverages available along the parade route from The Must restaurant throughout but the event itself is free.

The German-style Christmas Faire celebrates all that is good and fun about the holiday (bonus: there will be snow) but this list is not about that. This event features  metal Krampus folk artists Krammpstein and award-winning metal band Sapphic Musk. Other Krampus-themed attractions include costumed members of Krampus Los Angeles and puppeteer Robin Walsh  plus German fare and drink from Alpine Steinhaus.  There’s no shame if your name is on the naughty list at this event and Krampus costumes are encouraged so go all out.

There are bad movies and then there are so-bad-they’re-good movies and in this case it’s about celebrating the latter. The 1980s slasher film “To All a Good Night” is about a psychopath dressed as Santa Claus who murders a group of sorority girls and their boyfriends at a Christmas party. Enough said. This wouldn’t be a celebration of all that people love to hate about this film without prizes so the best one-liners roasting the movie will win prizes. Comedians Joe Derosa and Lisa Best will provide the laughs and everyone in attendance will get free popcorn.

This honors an 18th century tradition known as the Nicholas play (“Nikolausspiel”) with scenes translated from the original German scripts. Take everything warm and fuzzy about Christmas and turn it on its head and you might get an idea of what this play looks like, now picture it in the candle-lit Gothic revival Church of the Angels. The plot follows Krampus and Lucifer as they terrorize the kids who’ve misbehaved all while performing in rhyming couplets reminiscent of Shakespeare but far more tragic and disturbing. A series of films detailing the history of Krampus will be shown after the play with rare footage from the Austrian State Archives featuring Krampus characters engaging in pranks and more violent activities. Dress in period attire, themed costumes, or holiday attire. Tickets must be purchased in advance.

“Friends” aficionados can take one look at this picture and already know which episodes correspond with each costume. There’s Ross’s holiday armadillo & Joey’s Superman and Joey’s Turkey head for Thanksgiving (shout out to Monica’s turkey with yellow sunglasses). It’s festive, Instagram worthy and straight up fun. 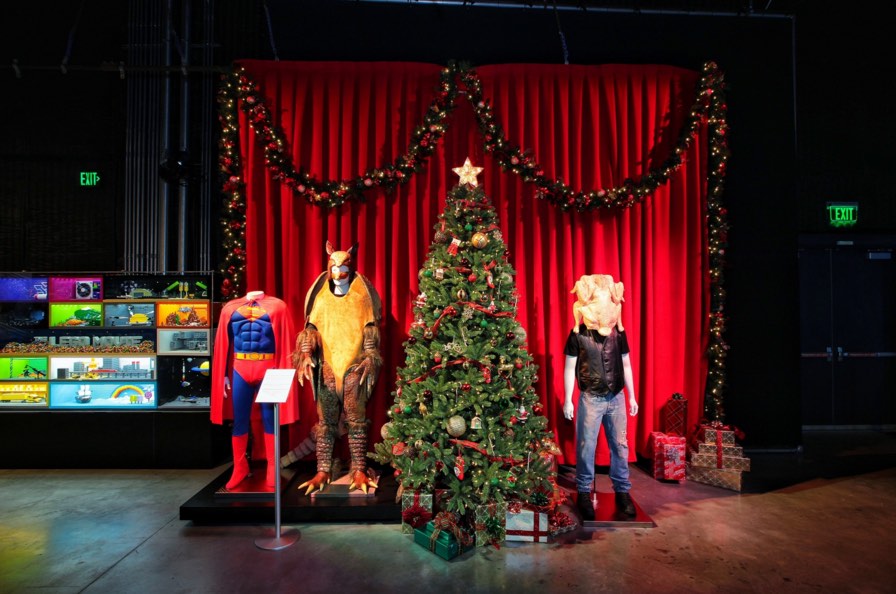 The Kirk Cameron film scored 0 percent on Rotten Tomatoes and won the Golden Raspberry for Worst Film so it’s not just bad, it’s spectacularly awful and thus a perfect film for comedian Doug Benson to rip apart. The movie interruption series has Doug and friends (previous guests include Jon Hamm, Sarah Silverman, and Zach Galifianakis) sit in the front row with mics on so they can share every random joke that comes to mind in reference to the film.

With improv you never know what you’re gonna get but at least with The Groundlings you know it’s going to be good. The show is a mix of improv and sketches all in celebration of the yuletide.

She’s got a special on Netflix called “I’m Gonna Die Alone (And I Feel Fine)” so her take on the holidays is unsurprisingly not traditional in any sense but instead embraces and finds humor in the dysfunctional. The third annual show promises “zero people asking you when you’re gonna get married and have kids.” which  makes sense considering she wrote a bestseller titled, “I Can Barely Take Care of Myself: Tales From a Happy Life Without Kids.” The show will feature former Chelsea Lately panelists Sarah Colonna and Chris Franjola and Joe DeRosa who’s appeared on Comedy Central’s “Premium Blend.”

What are your favorite strange, off-beat, or otherwise interesting ways to celebrate the holidays around Los Angeles? Let us know in the comments below!