Zombie Joe’s Underground Theatre Is Ready to Conquer the World 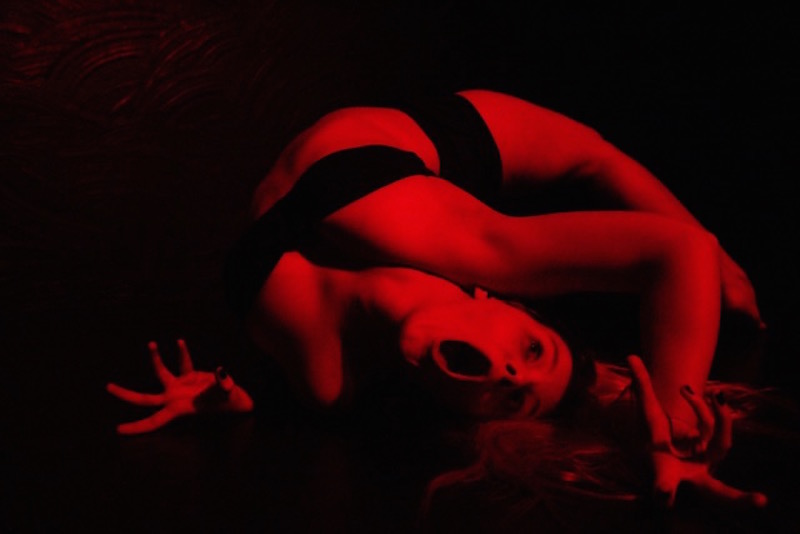 Comedy and tragedy masks have long been a symbol of theater. We laugh. We cry. Yet if we’re talking Zombie Joe’s Underground Theatre (ZJU) in North Hollywood, sometimes you laugh, but other times you’re terrified and appalled. The indie theater has been chugging along for over 25 years, blending horror and shock into a relentless stream of original, experimental shows unlike anything else in L.A. Now, ZJU is planning a trip to Scotland to perform at the Edinburgh Festival Fringe this August. To get there, they’ll need a little help from their fans.

The theater is in the midst of a major fundraising push to take their unique show on the road, with over $30,000 committed to date. But to truly understand how important this mission would be, you have to go back to the beginning and learn the history of the man at the center of it all.

Zombie Joe, who’s been going by the moniker so long it might as well be his given name, started the theater in 1992. He was in his last year studying theater and psychology at UC Irvine, but dropped out after the school rejected the idea of staging his play, The Masterpiece.

“It was about a dying artist in his last days and his relationships with fantastical people,” Joe recalls. Some of those people may have been lizards, and there were also giant Twinkies involved.

Joe sold his belongings and leased a garage in Northridge with his high school friend and long-time collaborator, Josh Ryan. The two staged a series of bizarre plays, including The Masterpiece, over the course of 13 months. Much of their work drew from Theater of Cruelty, an art form advanced by French writer/dramatist Antonin Artaud that unnerved audiences through intense, non-verbal stimulation including light, imagery, and sound.

“The theater was founded on a lot of anger,” Joe said. “We were doing really hardcore stuff on stage, like shock theater.”

As an audience member, you were not necessarily “safe,” Joe said, recalling the time a guest had her cashmere sweater ruined with a spray of tomato juice.

“The shows weren’t very good, but they were cool. We were just swinging around this industrial space,” he said. 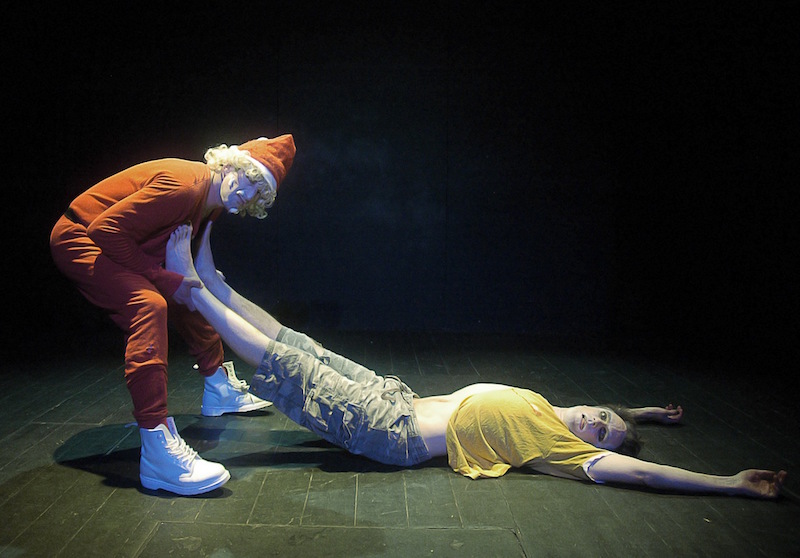 After about 13 months, the Northridge theater closed. Joe wrapped up his degree before briefly operating a new venue in Oakland in 1996. They only booked rock shows, as Joe found it difficult to get a theater off the ground.

After a few months, however, Ryan contacted Joe and said he knew actors in Los Angeles who were interested in their vision. So, Joe returned to L.A., where the pair opened another space in Reseda in 1997. This was where the theater really began to take off, drawing the notice of fans and critics alike. It was during this time that Joe also kicked what he describes as a “hardcore drug addiction.” He’s now in his twentieth year of sobriety, and invites anyone who needs to talk to reach out to him.

In 2000, the theater prepared for its final move, this time into the burgeoning NoHo Arts District. After about a year of searching, Joe found a storefront space on Lankershim. It had been an auto parts store in its former life. A large counter greeted entrants in the front with ample storage in the back. Joe and his friends transformed the store into the black box theater where they’ve been running three or four shows nearly every month for over 17 years.

“Sketches from the Underground was our first show in [this space], and we were off to the races,” Joe said. “It’s been nonstop. There were no more gaps. We’ve done over 300 different productions in this space, possibly more.”

Ticket sales are the theater’s only source of income, which means that frequency of performances is an economic imperative. Most are either produced or directed by ZJU, though there are occasional rentals where another group puts on a show. Many of the shows intersect with the horror/haunt/immersive community, which results in a younger audience than typically found in the theater, and one that includes people who wouldn’t necessarily consider themselves theater-goers. Many people treat ZJU like a hub for communing with like-minded fans. It’s not uncommon to see a short show at ZJU, then pop over to Idle Hour or another nearby hangout.

ZJU’s most popular show and top-selling show is Urban Death, Los Angeles’ own Grand Guignol. It takes the form of several disturbing vignettes, presented one after another. In between, there’s nothing but darkness. It’s like clicking through the world’s most nightmarish viewfinder, alone and late at night. Urban Death has been running since 2005, multiple times a year, each time with fresh content. The show employs only its cast and crew, a bag of props, and the blackest blackout a theater’s even known. The bare-bones approach does nothing to lesson the show’s impact on guests. If anything, it enhances the experience.

They’ll run a new show multiple times a year, including a 50-minute performance in the spring and their shorter ‘Tour of Terror’ show every Halloween. Since 2013, Tour of Terror guests have been forced to navigate a dark, winding maze full of monstrous creatures to access the show. Many haunt enthusiasts will tell you Urban Death is frequently scarier, on a visceral level, than blockbuster haunts like Universal’s Halloween Horror Nights and Knott’s Scary Farm.

It started in 2005, when Joe approached co-creator/co-director Jana Wimer and suggested they create a horror show.

“We already dabbled in horror over the years,” Joe said. “One day, because we both love the genre, we sat down and said, ‘if we were to do a horror show, what would that look like?'”

Wimer got involved with ZJU after moving to Los Angeles in 1999 with a degree in theater from California State University, Fresno. A friend who was acting in a ZJU show invited Wimer to attend, and she decided to check it out. What struck her most was how dark the blackouts were. In most theaters, there’s at least some form of light seeping into the space, even when the stage and house lights have gone out. That was not the case at ZJU.

“I’d never been in a theater with a blackout that’s pitch black, where you can’t even see your hand in front of your face,” Wimer said. “So when Joe said ‘horror show,’ that’s what came to my mind. The blackness. This show was really born out of the darkness.”

“The darkness is almost a character in the show,” Joe said. 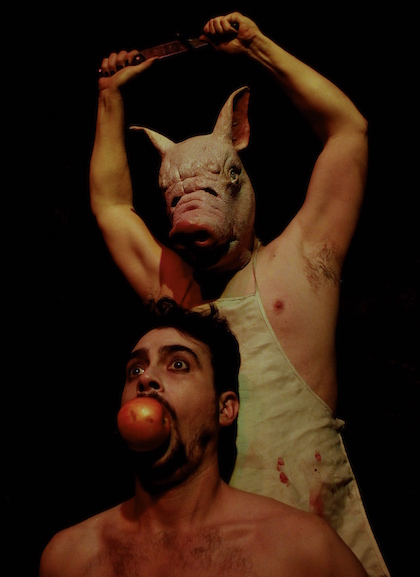 It sounds like a joke, but if you’ve seen the show, you know it to be true. Guests are told to put away their cell phones and anything that glows, ensuring an impenetrable darkness that the show often uses to its advantage. One year, guests were asked to write down their names on ZJU’s mailing list as they arrived. Later, during one such blackout, actors moved through the space whispering names taken from the list. Though I could not see the man sitting next to me, I could hear him whimper when his name was hissed by a disembodied voice. That moment was immediately followed by what sounded like rats skittering across the floor.

I most recently attended Urban Death in October of 2017. After winding our way past the scorpion creatures and clowns that lurked in the maze, we were seated on the floor in the small black box theater. In front of me sat a woman who alternated between shrieking and exclaiming, “Noooope!” depending on the chord each piece struck. In one scene, an actor ran screaming towards us, only to be dragged back into the darkness by a rope around her neck. Another found a man sitting in a doorway, repeatedly flicking a flashlight on and off. He turned the light on a final time, revealing a long-limbed shadow lurking behind him. He switched the light off before we could see his fate. Another scene depicted a man in a pig mask, sharping a knife as he towered over a nude, bound man with an apple in his mouth.

Sometimes the pieces are meant to be humorous in a macabre way that celebrates the pathetic. One piece depicted a man in a tuxedo delivering a box of chocolates to his lover, only to realize the hyperbolic moaning coming from his door was his partner cheating on him. The audience laughed uncomfortably as the realization blossomed on his face.

The jilted lover, as well as the pig man’s meal, was portrayed by actor Abel Horwitz, who is helping with efforts to raise funds for Edinburgh.

“I came into this five or six years ago as a performer, but I saw something extremely special with this show,” Horwitz said.

While the show has traveled before, notably to New York in 2008 and South Africa in 2013, this trip would take ZJU to a whole new level. As Horwitz notes, Edinburgh is where Fringe Fest began. Established in 1947, Edinburgh Festival Fringe takes place over the month of August, cramming over 3,000 shows into 25 days. Hollywood Fringe, which takes place in June, did not kick off until 2010. Horwitz described Edinburgh’s fest as, “Mount Everest when it comes to theater.”

ZJU is using GoFundMe to solicit donations, with a goal of $40,000. This would pay for the cast and crew’s plane tickets, room and board, and other expenses. Their soft deadline is May 15, but they’ll continue to raise funds thereafter.

Urban Death would be one of only a few horror shows in the mix, and one that fits well within the unjuried, anything goes spirit of the event. The company hopes that Edinburgh will propel them to an international playing field, where they can tour or franchise Urban Death around the world. Plus, as Horwitz points out, Edinburgh has its own “haunted” history that meshes well with their style.

“It’s MacBeth, it’s witches, this whole underground city of sorcery and the occult,” he said. “We’ll be in the shadow of Edinburgh Castle and down the street from Frankenstein Pub.”

Wimer hopes to both dig into the city’s local lore, as she did when taking Urban Death to South Africa, and play with topical events.

“America doesn’t look so great on the world stage right now, and I really want to create a piece where we’re calling ourselves out,” Wimer said.

For Joe, who uses the phrase “grow or die,” taking the show on the road is the next step in a journey that’s spanned three decades. It’s one he refers to as both a blessing and a curse, saying, “I know this is exactly my path. [This theater] is where I’m supposed to be.”

To support ZJU’s international endeavors, you can check out their GoFundMe and all its backer perks here. You can also attend the next installment of Urban Death, running Fridays and Saturdays from May 4 through June 9. Tickets are $15, and a portion of sales will go towards the group’s trip to Scotland. Find out more about that show and others here.