The 5 Reasons L.A. Will Always Be a Lakers Town

Disclaimer: I don’t normally utilize this blog to parade around my Lakers fandom.

And if you happen to be a frequent visitor who finds this topic unappealing, there are plenty of articles with lists of free museums, awesome hikes, and summer to-do topics for you to browse.

However, after watching Tuesday’s introductory press conference for the new coach of the Los Angeles Lakers… well all I can say is something compelled me to write. So here we are.

Seeing Magic, Kareem, and Jamaal Wilkes beaming while lauding their little bro Byron Scott as the new head-man for L.A.’s most important sports franchise, it was like bathing in magic (no pun intended) waters.

All of a sudden the flash flood of warm and fuzzy feelings  had me searching on YouTube for everything from Magic’s game winning baby-hook in the’87 finals against the Celtics to Kobe’s iconic lob to Shaq against the Blazers in the western conference finals that came to embody the genesis of a new dynasty.

And as the presser dragged on I was particularly affected by an almost throw-away line towards the latter end aimed at the topic of the Clippers-Lakers rivalry.

When prompted by a question regarding the Clips’ potential ownership of Los Angeles, Scott responded somewhat sternly:

“I don’t think L.A. has gone to the Clipper yet. This is still a Lakers town. Period.”

Hmmm…. for starters, there’s a couple things I want to unpack from this statement.

In truth the Lakers are going to be mediocre at best this upcoming season. More probably, just plain awful.

As a Lakers fan I can look ahead to the specter of many frustrating evenings yelling at the television, ranting on Twitter, and seething at the troll-job I’ll receive at the hands of Clippers fans, both bandwagoners and life-longers alike.

But let’s not count your chickens just yet, newly entitled Clipper fan.

Scott’s word “yet” suggests (rightfully so) that this is a Clippers team on the rise, but still waiting to arrive.

Also, that “Period” that Scott puts on his end of his statement isn’t just for effect. It’s symbolic of all the reasons why the Clippers will always be second (or third, or fourth, or fifth…) fiddle in this town.

And to me, there are exactly five of these reasons.

But let’s break that down, point-by-point.

First let’s compare the historical greatness of the two franchises in question, which really isn’t much of a comparison at all.

Perhaps no stat illustrates the difference between the Lakers and Clippers more than this gem:

In their 66 years of existence dating back to the Minneapolis days, the Lakers have reached the division/conference final round of playoff play an amazing 39 times, or roughly 60% of their total seasons.

The Clippers… not once. Not one damn time in the history of the NBA have they been one of the last four teams standing. It’s a remarkable run of futility perhaps only equaled by the incompetence of their ownership.

But more on that guy later.

Legacy isn’t just what resides in the past, it’s what’s handed down to future generations.

In this case it’s the tradition of great centers, of MVP guards, hall-of-fame coaches, and championship dynasties. It’s an expectation of greatness, both from players and fans, that has been earned over time.

If you’re the Clippers you’ve got… Loy Vaught, iconic announcer Ralph Lawler (who as good as he is, pales in comparison to Chick Hearn) and the most notably horrendous (former) owner in sports.

But I guess you’ll always have San Diego… 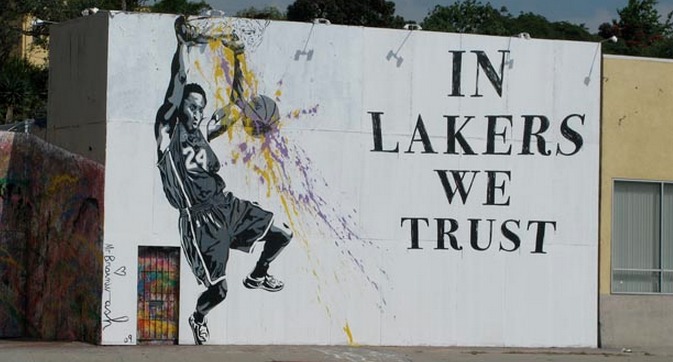 Now about that owner.

Donald Sterling may be on the way out, but the wreckage, both real and emotional, left in his wake is absolutely brutal.

Sterling has become a villain of almost Dickensian proportions. Besides being a slumlord, an asshole, and a caught-on-tape racist, he is also (I say it again for emphasis) the worst owner in the history of professional sports.

Speaking on his radio program a few years back, Ireland recounted a story of Sterling’s flirtation with the idea of moving the Clippers down to Anaheim to play in the Pond (now Honda Center) back in the mid 1990’s.

As he tells it, Ireland says that the Donald had gone down to Orange County to speak with executives at the arena to discuss finalizing a possible move. After a promising lunch, Donald excused himself from the room to use the restroom.

And he never came back. Seriously.

Later when asked why he balked at the move, Sterling suggested that Anaheim would be too much of an inconvenience for his rich L.A. friends to have to drive to attend games.

And even though Donald has been ousted, if the history of sports tells us one single thing, it’s that bad juju baked in this long never seems to wash off after just a season or two (just ask Cubs or Red Sox fans).

Did you know that Lakers Nation Facebook Page  (a independent fan site not officially associated with the Lakers) has almost as many fans the L.A. Clippers official page, both hovering the 2 million range.

By contrast, the official Lakers page on Facebook has over 20 million fans!

And then there’s twitter, where @Lakers boasts nearly four million fans while @LAClippers stands at less than one sixth of that total.

Even on Reddit, the Lakers community is roughly six times bigger than that of the Clippers.

Truth be told, in terms of the pure battle for reach, conversation, and engagement on social media the Clippers are facing a virtually insurmountable climb.

And then of course there individual anecdotes that drive this point home, like the example of Tyson Beck, a graphic artist from Adelaide, Australia who has created literally dozens of custom Lakers wallpapers in his spare time, all basically because he was a huge Lakers and Kobe Bryant fan… from halfway around the world.

The fact that Planet Lakers recently voted Beck as the world’s biggest Lakers fan via a poll run by TWC Sports is just one of many examples of the world wide appeal of the Lakers on social media (that and pretty much everyone from the Philippines ever).

And while this all might seem like a consequence of branding and history, it also serves to perpetuate the cycle of brand dominance the Lakers have over the Clippers.

For better or worse, the big keep getting bigger.

This is the most important, and perhaps most ethereal aspect to illustrate. And if you don’t live in Los Angeles, it may be kind of difficult to describe.

You hear it in talk radio and lyrics in rap songs. You see it in the street art, and the posters in restaurants and yes, even in the celebrities who decide to attend Lakers home games.

It’s a Lakers town, through and through, even when the team is borderline unwatchable.

Just wait and you see this upcoming season how things play out.

One prediction: a minor story about a disagreement between Kobe Bryant and Coach Scott will dominate the local news for weeks on end, pushing aside what might be a very inspired stretch of play by the Clippers.

Or how about a second scenario: As the season winds down with the Lakers clearly heading for the lottery, an endless debate will rage about whether they should tank to get a top-5 draft pick, and thus avoid having to ship their first rounder to Phoenix (thanks Steve Nash trade!).

The Clippers, on the other hand, will surely be one of the top seeds in the west on a mission to make a run to the finals, and yet, even in futility, the Lakers will dominate the news cycle.

The irony is so thick you almost have to brush it away from your face. With their winning/losing roles completely reversed, it’ll still be the Lakers who own the hearts and minds of the public in Los Angeles.

The Clippers Future in Los Angeles

In the short term, the Clips’ future is bright. They’ve got Chris Paul and Blake Griffin, and have an outlook to be a contender for at least the next 2-3  years before Paul’s knee probably gives out on him.

On the flip side there is the Lakers… and Jim Buss. As much as his father Dr. Jerry built up the incredible history and aforementioned legacy passed down to him, let me just say I have serious doubts about how steadily the former horse trainer can guide this ship.

But even a small window of dominance over the Lakers, cutting ties with Sterling, and the vulnerability of mediocre Lakers ownership won’t be enough for the Clippers.

They need not just a face-lift, but full franchise reconstruction and brand augmentation. The marketing equivalent of a trip to the plastic surgeon.

So what I propose is this:

Taking a cue from the Stringer Bell school of economics, when faced with a product that has lost credibility in an aggressive marketplace, where you are unable to buy out your competition, you really only have one good option left… change the name.

Renaming the franchise would not only a symbol of  hitting the reset button on their gloomy past, but a public gesture of reconnecting with the local populace. Plus, they could probably come up with a slew of new options better than the “Clippers.”

And maybe… just maybe… with a complete re-branding, with new ownership, a new name, 10-15 years of competent, exciting basketball and at least 2-3 championships (oh that’s it?)… maybe the Clippers (or whatever their name will be) have a shot at hijacking some of the market share of the city of Los Angeles from the Lakers.

Then again, who am I kidding?