14 Best Places to Eat in L.A. if You Can’t Stop Thinking About Bacon

You know it and I know it — when you’re craving bacon, nothing else will do. Some folks may claim the fad is over and done, but let’s face it: Bacon love is eternal.

Luckily for Angelenos, there are plenty of great places to indulge.

Keep in mind that in Los Angeles, bacon isn’t just for breakfast, either. The cured meat is available on donuts, pizzas, toast, dates, sausage, biscuits, and even cocktails. L.A.’s bacon love runs deep, and we’ve complied a list for you to have handy during those times when you simply can’t shake the craving.

Get ready for some bacon action that’ll have you salivating — and wishing you wore your stretchy pants. 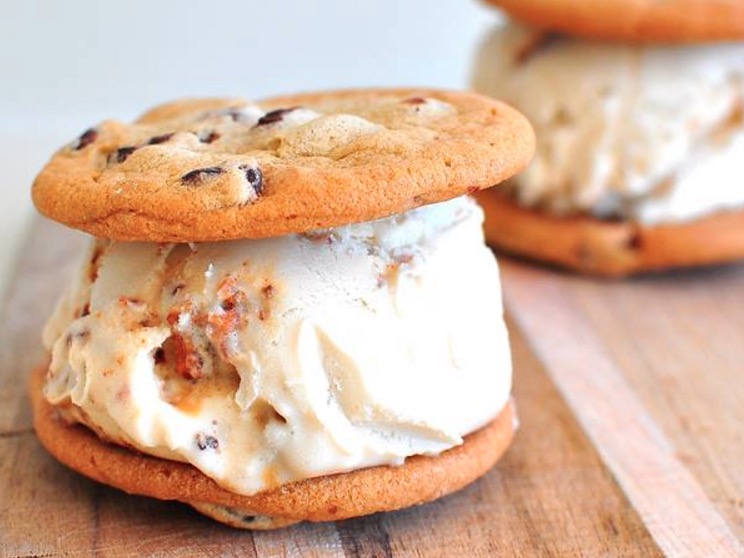 Visit this Culver City creamery and you might find yourself happily overwhelmed with all the ice cream flavors you could ever want. If you’re feeling something sweet, savory, salty, and creamy, the brown butter candied bacon ice cream with satisfy all of those desires.

This Hollywood eatery serves up beloved “crack” bacon — it’s so good that someone even wrote it a song! The delicious bacon can be found in many dishes on Grub’s unique brunch menu, which features dishes like The Kevin Bacon (eggs, “crack” bacon, and garlic and roasted potatoes), The Carnivore B.F.P. (a “big flippin’ pancake” with their bacon baked in and cheddar cheese), and more.

Get your bacon brunch at this Santa Monica spot with the bacon crepe, which contains scrambled eggs, white cheddar, and cilantro. For the ultimate bacon brunch, pair it with the bacon Bloody Mary, because can brunch ever have too much bacon? (The answer is no, it cannot.)

Four words: Bucket of Candied Bacon. It exists and it’s proof that food dreams really can come true. The Melrose Avenue location of this BBQ restaurant has this popular, ahem, bucket on the dinner menu for a mere $4. Order and indulge to your heart’s content. 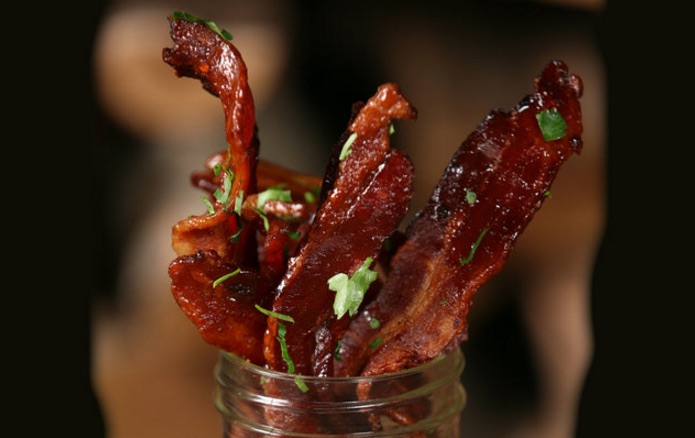 For fans of alliteration, this bakery in Burbank boasts bountiful baked cupcakes, including the Bacon Breakfast Bonanza. It’s a brown sugar cinnamon maple cupcake with bacon baked inside and frosted with a vanilla bean buttercream. On top, there’s more bacon and boysenberry syrup. Yummy indeed!

The popular Highland Park artisanal donut spot gets deep into the bacon love with the Bacon 182. It’s a donut with real maple glaze and bacon on top. If you’re vegetarian, fear not — Donut Friend also makes the treat with coconut bacon instead. Get yours fast, before both versions sell out for the day.

The Mario Batali, Joe Bastianich and Nancy Silverton pizza powerhouse on North Highland Avenue makes several pies featuring bacon, because everything truly is better with it. A favorite is the egg, bacon, yukon gold potato, and Bermuda onions pizza.

After an epic meat-filled meal at the Fairfax Avenue restaurant, opt for the bacon crunch chocolate bar and salt & pepper ice cream for a unique sweet and savory dessert. You won’t regret it.

As its name suggests, the Little Tokyo cafe has got a lot of sweetness going on, including its own take on a bacon donut AND bacon donut holes, for the complete dessert bacon experience.

This vintage Downtown LA diner has lots of dishes with bacon — including a breakfast one humorously named “Hangover Helper” — but most people talk the most about Nickel Diner’s maple glazed bacon donut, which is a heavenly feast for the taste buds. 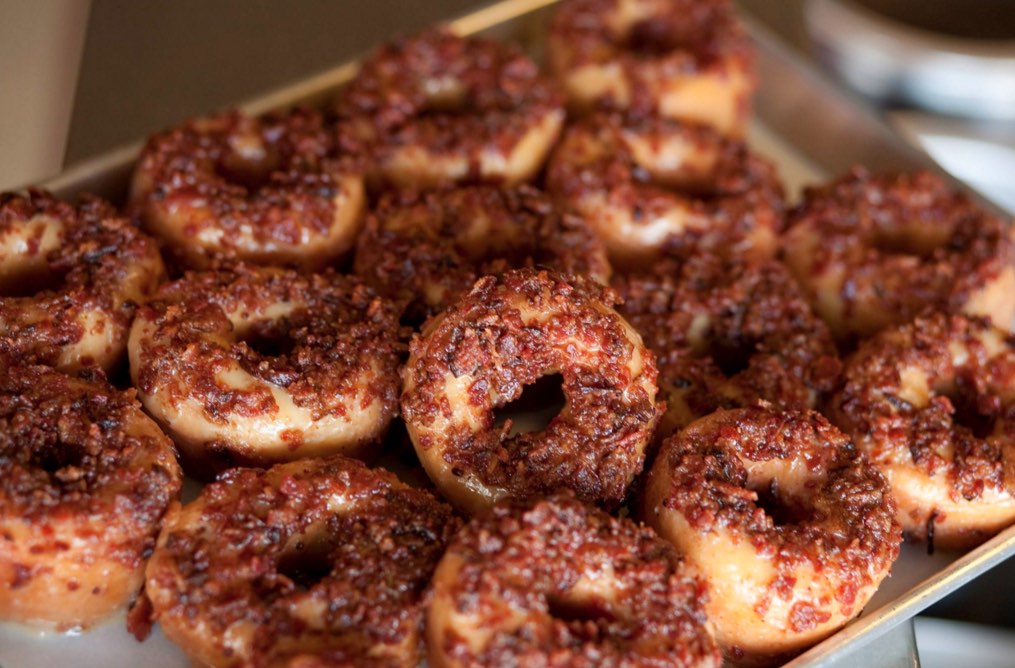 If you’re looking for a bacon sausage fest, you’ve come to the right place. This sausage joint (which has locations in Downtown L.A. and Venice) has lots of succulent flavor packed in the Duck, Bacon & Jalapeno Sausage in a pork casing from their exotics menu.

Among the delicious dishes at Chef David LeFevre’s Manhattan Beach eatery, a foodie favorite is the bacon cheddar buttermilk biscuits with maple butter from the bread menu. The combination of sweet and salty is pretty unforgettable.

When you think of Slater 50/50, you’re probably thinking of burgers. But that’s not the only place you’ll find bacon on their menu. The restaurant boasts an entire bacon cocktail menu — no joke. The selections include the Bacon Mary, Baconade, Bacon Old Fashioned, and the Chocolate Covered Bacon Banana. Indulgence at its finest.

Where are your favorite bacon related dishes in Los Angeles? Let us know your picks in the comments below!