10 Spots for the Best Dumplings in Los Angeles

As a child growing up in the SGV I often watched in amazement as my grandmother prepared dumplings from scratch for our massive family meals. Sometimes I’d even chip in and make a few myself, but the truth is it was no easy task.

A good dumpling requires fresh ingredients combined with the proper skill, patience, and technique. Luckily for us Los Angeles has a myriad of delicious dumpling creations just begging to be tried, and we’ve put together a rundown of the best of the best for your enjoyment below.

That said, when it comes to dumplings there are many different styles to choose from, so before we dive into the list let’s examine some of the most common dumpling types you might encounter.

[RELATED: The 16 Best Places to Eat in the San Gabriel Valley Every L.A. Foodie Needs to Try Once]

Here are five of the most common dumpling variations:

Ok, now that you’ve been given a crash course  in Asian dumplings, let’s dig into our best-of list and find out where to find the top dumplings in L.A.

We want our customers to only have the best. #DinTaiFung #DinTaiFungUSA

This is the most famous dumpling house in all of Los Angeles. Din Tai Fung has gained positive reviews from LA Weekly, Los Angeles Times and even The New York Times who all identify Din Tai Fung as one of the best places to eat period. The skin of dumplings here are delicate but strong enough to hold hot savory soup and a filling without breaking. Take a bite of that juicy dumpling after dipping it in black vinegar sauce. If you have a sweet tooth order a round of sweet dumplings for dessert. Come early as there is always a long wait.

Yes this place is famous for their beef rolls but 101 Noodle Express is no one trick pony. Take their fried pork dumplings for example. The tasty salty dough is fried golden brown on the bottom with just the right amount of crisp. The crunchy bottom is complemented by some juicy and tender pork filling. Order the beef rolls too, they are delicious!

You have to give it to them for their name, they do in fact serve up some luscious dumplings here. Order the chive, pork, egg, & shrimp dumplings, the panfried sole, napa cabbage and pork dumplings. The chive pockets are popular too, think of it as a savory and chewy cookie filled with chive, pork and glass noodles. If you want to try some of the noodle dishes, go for the combo deal of dumplings + noodles to get your fill. 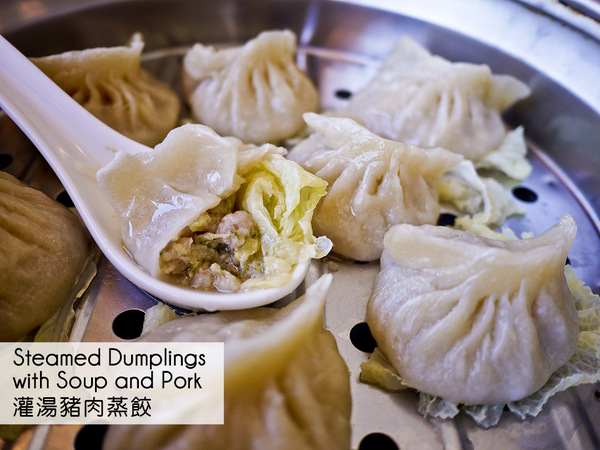 This little cash only hole in the wall is an OG when it comes to dumplings. Order the crab and pork XLB (soup dumpling) you wont regret it. The XLB are hot and juicy and some believe it good enough to rival Din Tai Fung, although the whole no wait thing is much more appealing here. For dessert order the gluttonous sesame ball soup, a form of dessert dumpling.

Another cash only gem in Monterey Park, Qing Dao Bread Food is known for their jian jao (fried dumplings) with leek and shrimp. The outer layer of this particular dumpling is more boa (bread) like than a dumpling skin. Once fried, the bottom half of the dumpling turns golden brown while a quick steam technique right in the wok flash steams the top of the dumplings, served to you piping hot with a side of pungent garlic sauce. Another winner here is the boiled sole and Chinese parsley dumpling: flaky chopped fish and cilantro are stuffed in a thick doughy skin, then boiled in salted water.  Order the boiled lamb dumplings if you don’t like fish.

This place has a xiaolongbao on steroid. The dumpling is as big as a burger in diameter and the soup is just waiting to burst out of that monster. In fact, people often punctured the dumpling with straws in order to slurp up the soup inside. It’s quite impressive to see the a dumpling able to hold the stuffing and soup without popping like a volcano. Order the crab and pork filling with the sweet yellow broth. If the big XLB seems too novel for you opt for the normal sized dumpling they are just as tasty.

The Anthony Bourdain approved Myung In Dumplings in Koreatown serves up something called king dumplings. They look more like a Chinese bao than a dumpling, the skin is bread-like and you can pick it up with your hands and eat it. Do like Bourdain and order the pork and kimchi dumplings, the meal also comes with tasty banchan dishes like most Korean establishments. 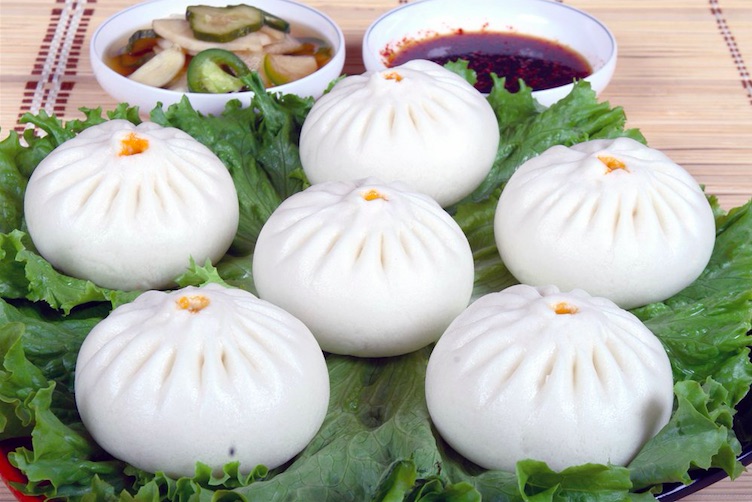 Shanghai Dumpling House in San Gabriel has been favorably compared to Din Tai Fung, and with good reason. The dumplings are made on the spot, hot out of the steamer and place before your hungry eyes. They are juicy, bursting with soup and stuffed with filling that include pork, shrimp, spicy pork, crab roe and vegetables. If you like Din Tai Fung but don’t want to wait in a long or are looking for more reasonable prices, come here.

For those who love spicy food, this dish is for you… the spicy dumplings in numbing sauce are made up of silky wontons, filled with rich fatty pork and bathed in chili oil. Just like every other Chengdu Taste item, you know it’s hot as &%$#@!  but once you start you really can’t stop it’s the vicious and delicious cycle known as Chengdu Taste.

Come here for the hockey puck-sized “pies” known as xian bing, a specialty of northern China. Wait, is this a dumpling? Some say yes, some say no but it’s freaking delicious and something you have to try at least once. It’s called a pie but it’s actually more like a doughy disk pan fried till the outer shell blisters and forms a crisp. Order the summer squash & lamb or lamb & green onion “pie” each order comes with four on a plate. Now I should warn you, the menu and waitress will probably do the same, these pies are HOT so bite into them with caution. Cash only here folks.

Where is your favorite dumpling spot in Los Angeles? Let us know in the comments below!