Patrick Duffy & Family Have a Hollywood Theater Bar, Complete with a Drink Named for an Actual Mule 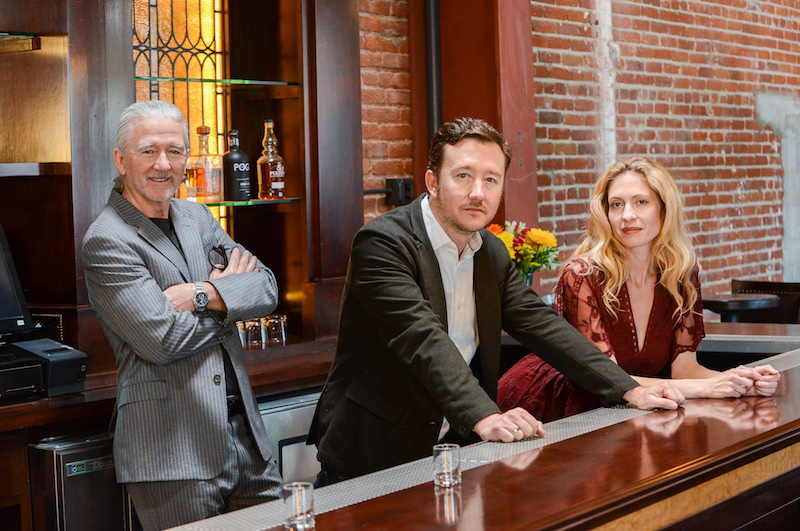 The Broadwater Plunge is a theater bar in the truest sense. Not only is it housed inside an operational theater; it also serves as a gathering place for playwrights, producers, actors and audiences alike. It comes via actor Patrick Duffy, his son Padraic Duffy, and his daughter-in-law Emily Kosloski. Though they’ve only been pouring drinks since June, the bar’s fascinating origin story involves both a mid-century Montana bar and a long-running theater company.

Padraic Duffy is the Managing Director of Sacred Fools Theater Company, while Kosloski is the company’s Director of Development. Founded in 1997, Sacred Fools presets a number of plays, workshops, and classes throughout the year. In 2016, the company moved from their East Hollywood space to a much larger 8,400 sq. foot, four-stage complex on the stretch of Santa Monica Boulevard known as Theatre Row. The entire complex, which the elder Duffy owns, is called The Broadwater after the Montana county where he was born. Though Sacred Fools is Broadwater’s resident company, other companies often rent out stages for their own shows. As such, Padraic Duffy and Kosloski felt like what they really needed, as opposed to a possible fifth stage, was a space to mingle.

“We really needed a place where people could go before a show and meet their friends or where casts could come out and see their friends who saw the show,” Padraic Duffy said. “Or, we’ll have a production and there will be two rental productions, so [the bar] is a place where you can meet who’s sharing the building with you.”

The narrow bar is handsome with exposed brick walls, deep red booths, an upright piano, and shelves packed with plays. Feel like ordering a drink and table-reading Julius Caesar? Go right ahead. Or perhaps a drink will lead to spontaneously seeing a play. In the future, the family hopes to install a board, similar to those found in airports and movie theaters, that tells patrons which plays are showing on any given night.

Behind the bar, guests will find a selection of beer and wine, plus two separate cocktail menus each containing five drinks. The Sacred Fools menu pays homage to the company’s work. A spicy mezcal drink called The Serial Killer refers to Sacred Fools’ long-running show Serial Killers, in which serialized stories compete against one another on a weekly basis.

The Siren’s Call—Bombay Sapphire East, Luxardo, simple syrup, Angostura Bitter, absinthe rinse, sugar rim—is a nod to the company’s proclivity for sci-fi pieces, specifically their remount of Kurt Vonnegut’s Sirens of Titan, as adapted by filmmaker/playwright Stuart Gordon. The boozy Stoned Face comes via Sacred Fools’ 2012 show about actor Buster Keaton, whose nickname had been “The Great Stone Face.” Keaton’s production studio was once located at the corner of Eleanor Avenue and Lillian Way, just steps away from Broadwater Plunge’s door. 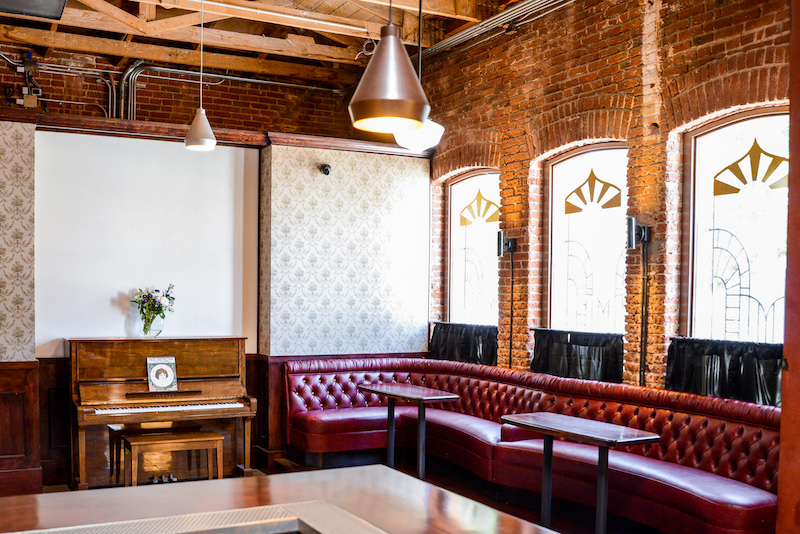 The bar’s other custom libations can be found on The Owl Bar menu, and this is where the generations begin to merge.

Long before Patrick Duffy was starring as Step by Step patriarch Frank Lambert or Dallas‘ Bobby Ewing, one could have found him in the small town of Boulder, Montana, doing his homework at the tavern owned by his parents, Marie and Terence Duffy. It was called Owl Bar, and a door in his childhood home’s kitchen led straight into it. The patrons that routinely warmed its stools were well-known to Duffy, even as a kid.

“Everybody would come in after work,” Duffy recalls. “It was literally a rotation where people would come in and have a drink, then go home and make dinner. It became so regular that my sister and I just felt like they were all extended family.”

Several of these regulars are represented via cocktails, albeit much more of the craft variety than the simple ones Duffy’s parents would have poured back then. The George Paradise is a highball named for Boulder’s sheriff. His wife, known only to Duffy as Mrs. Paradise, taught Duffy in grade school. The Kittie & George—a shot of J.R. Bourbon and a can of Hamm’s—pays tribute to a couple that frequented the bar. Kittie was the mother of Duffy’s best friend. A refreshing Aquavit cocktail is called The Swede, after the nickname of Owl Bar’s Swedish handyman. The Ed Haley is a rum drink with molasses and honey, served hot in the winter and cold in the summer. The real Ed Haley drank a similar concoction and worked as a custodian at a radon mine believed to have healing properties.

“It was a big radon mine with benches all along the tunnel and people who had any sort of malady would just go sit in there for a few hours,” Duffy said.

Though the American Medical Association has long denounced radon therapy as quackery, there are still a handful of radon mines in western Montana to this day.

Like many bars, The Broadwater Plunge has their take on a Moscow Mule, this one made with bourbon and lemongrass. Unlike most bars, theirs is named for an actual mule owned by a guy named Jimmy Stubblefield.

“He had a little place out of town where the mule lived, and he would bring him in the bar. My sister and I would sit on him,” Duffy said. 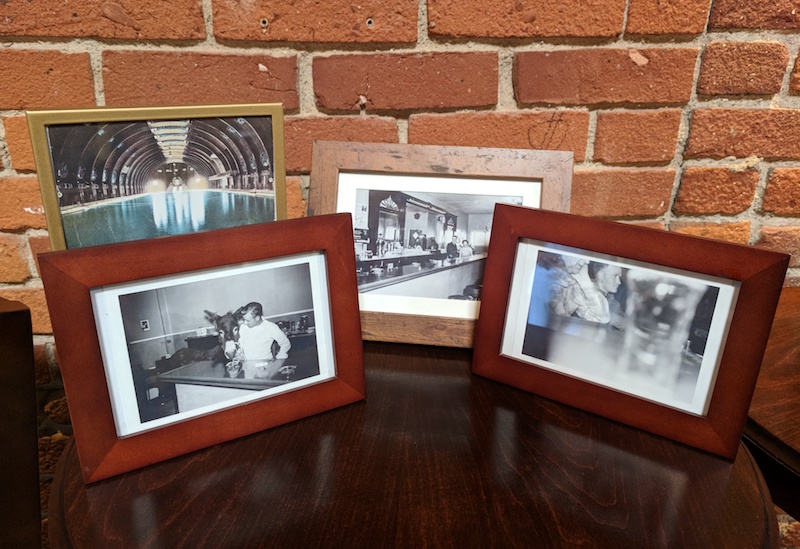 Many of these regulars of yore, including the mule, can be seen in old photographs placed around the Broadwater Plunge. Other remnants of Owl Bar are found in the massive old cash register behind the bar and a school bell the Plunge’s bartenders ring to signify last call, just as Duffy’s parents did.

The most significant detail is the backbar’s twin stained glass panels, each topped with a decorative mirror piece. This mirror’s pattern is repeated in several of the complex’s design elements, down to the logo.

The mirrors themselves were originally installed in the Broadwater Natatorium, an opulent spa in Helena which, when it opened in 1889, boasted the largest natural hot water plunge anywhere. This is where The Broadwater Plunge gets its name. The owners of Owl Bar that preceded Duffy’s parents had purchased the mirrors at an auction for their own backbar. Though Duffy’s father later renovated Owl Bar, Duffy would ultimately find the mirrors again in storage.

“I trucked them back to our house in Tarzana where they sat for 20 years, and then I put them in a truck and took them up to our ranch in Oregon where they sat for 15 years,” he said. “When Padraic and Emily decided to build this bar, they said, ‘What about those two pieces?’ So we brought them back down, and [here they are.]”

Though no one’s yet to bring a mule by, the bar has already seen its share of two-legged business, especially during Hollywood Fringe.

“It often feels like you build a bar and then try to create a community,” Padraic Duffy said, “and we definitely were a community that needed a bar. There’s also talk of a community in theater, which is short for theater community, and it’s not about your geographical community. So, it’s kind of nice to have a place…where we will interact with the people who work and live nearby. You get in your bubbles in L.A., so I think that’s kind of exciting.”