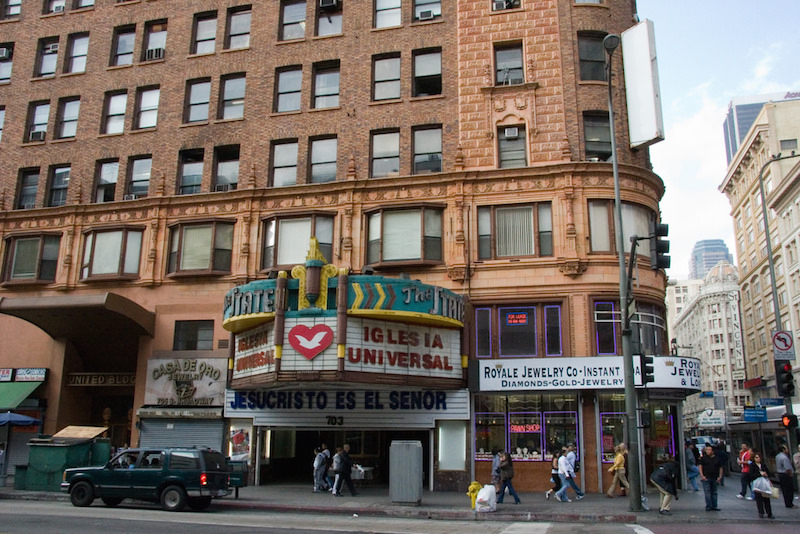 The State Theatre has been closed off to the public since 1998, when the Universal Kingdom of the Church of God signed a long-term lease on the space. Their lease expired in early 2018, and now, for the first time ever, the Los Angeles Historic Theatre Foundation (LAHTF) is offering a tour of the nearly century-old vaudeville house.

The State Theatre, originally known as Loew’s State Theatre, was designed by architects Charles Peter Weeks and William Day. The 2,450-seat venue opened at the corner of Broadway and 7th in 1921, where it exists within a 12-story, brick building. Its interior, however, was designed in the Spanish Renaissance style. The first performance was a vaudeville act, followed by a screening of silent film A Trip to Paradise.

In 1929, popular vaudeville act the Gumm Sisters performed at the State Theatre. The youngest of the three sisters, Frances Gumm, was given the nickname Leather Lungs, as she could project her singing voice all the way to the back of the house. Leather Lungs would go on to change her name to Judy Garland. In a 1960 interview with Redbook, the Wizard of Oz star said she loathed that moniker, but loved to sing.

“There is something wonderful about belting a song across the footlights, clear and true, and feeling it bounce off the top balcony,” she said. 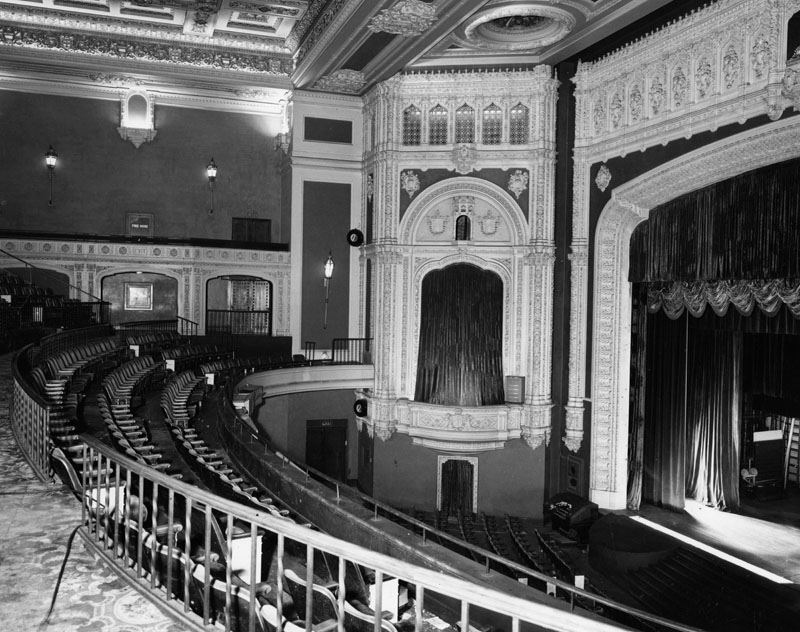 In 1949, United Artists took over the theater and changed its name from Loew’s State Theatre to simply State Theatre. In 1963, Metropolitan Theatre assumed control and began screening Spanish-dubbed films. After they shut down in 1997, the church signed their lease in ’98 and began using it as a Cathedral of Faith outpost in the 2000s. In a 2001 LA Weekly article, writer Slobodan Dimitrov called the church’s Friday night exorcisms “one of the best shows in town.”

In 2018, the church’s lease expired. LAHTF is working on restoring the theater and finding a new tenant. In the meantime, they’re hosting one of their “ALL ABOUT” tours at the State Theatre on April 29. LAHTF’s ALL ABOUT tours offer a look at the past, present and future of each venue, followed by a docent-led tour of the theater, including areas typically off limits to the public. Their last event in February delved into the history of the Earl Carroll Theatre in Hollywood. This April event will be their first time in the State Theatre.

ALL ABOUT the State Theatre takes place on Saturday, April 29. Doors will open at 9:45 a.m., followed by the presentation and tour at 10 a.m. Tickets are $20 for general admission or $10 for LAHTF members. The event will be followed by an afterparty at Clifton’s.

If you can’t make that date, the L.A. Conservancy’s Last Remaining Seats series screens classic films in historic venues. For their Last Remaining Seats at the State Theatre (the first in 20 years), they’ll show Mr. Smith Goes to Washington (1939) on Saturday, June 2 at 8 p.m. Tickets are $22.