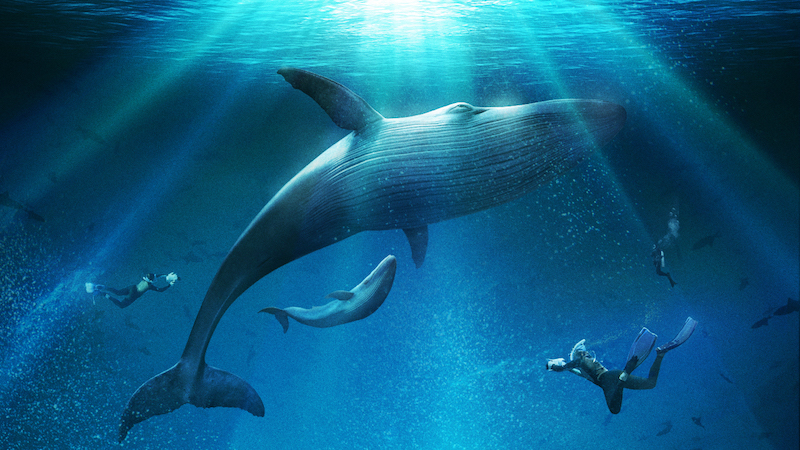 Dreamscape Immersive, the latest contender in location-based virtual reality, has opened in the Westfield Century City mall with three unique adventures. Each one is truly beautiful and a testament to the possibilities of VR. It’s all-ages escapism at its finest and an experience that cannot be replicated at home.

Arriving at Dreamscape is like prepping for a flight, minus all the TSA hassle. From the mall’s sunny second floor, you’ll enter Dreamscape’s “Departure Lounge” where you’ll have three destinations to choose from: the otherworldly Alien Zoo, the Indiana Jones-esque Lavan’s Magic Projector: The Lost Pearl, and the breathtaking deep-sea mission, The Blu: Deep Rescue. Whether you’ve purchased a ticket in advance online or snag one upon arrival, you’ll receive a boarding pass printed with a three-letter code, just like an IATA airport code. The boarding process hints that you’re headed somewhere else, somewhere beyond the confines of a bustling mall.

Unlike some VR experiences where you don’t see yourself in VR or see only a pair of floating hands, this is a full-body experience for up to six guests at a time. You and your teammates will all appear in VR as various avatars, dressed appropriately for whatever world you’re exploring. You choose your avatar at check-in (there are male, female, and gender neutral options), then wait for your trip in a lounge area where seating and concessions are available. In the center of the room, cases display various ephemera from the three missions, including sketches, artifacts, and letters that supplement the stories. 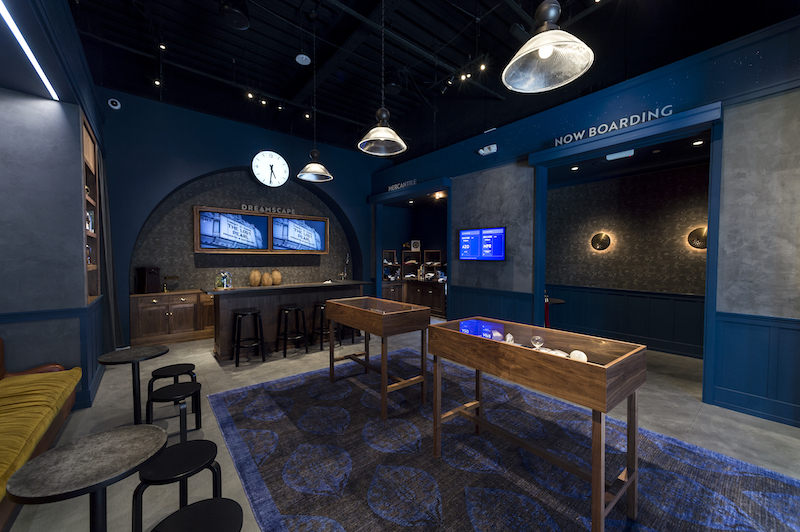 When it’s time to depart, an attendant escorts your group to get suited up. Each guest wears tracking devices on their feet and hands, as well as a backpack and headset. They’re easy to put on and fairly comfortable. Finally, you’re led into a plain black room which is, despite all appearances, where the magic happens. Some might find it disappointing to see the bare bones of the space without the fantastical VR skin, but I like it; when I was a little kid, all I wanted was my own personal Star Trek: TNG-style holodeck.

With your headset on, you’ll see yourself and your teammates as your selected avatars, complete with personalized name tags bearing your initials. And then, a new world appears.

Each adventure is considerably different. In The Blu: Deep Rescue, a partnership between Dreamscape Immersive and Wevr, you’re a team of elite divers sent to find a missing whale.

In Alien Zoo, you soar on a transport pod through a wildlife refuge in space. The creatures live in their own sort of biodome. There’s the mischievous Frog Cat—comprised of a frog head, a cat body, and the tail of a leopard gecko—and the carnivorous Sicari, who may fail to differentiate human visitors from her lunch. 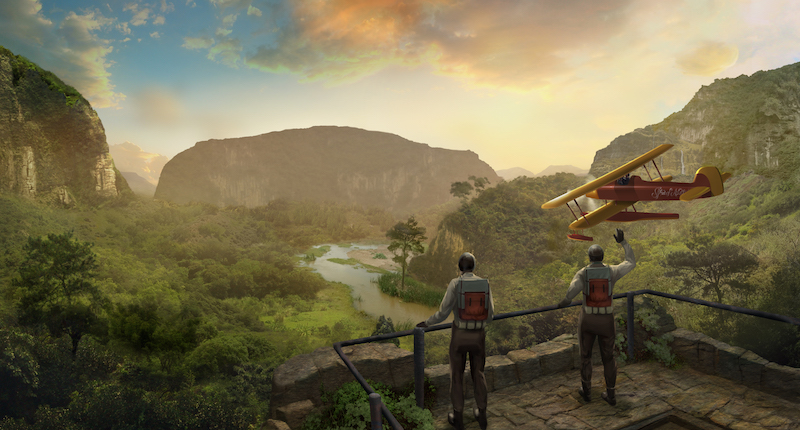 In this scene from ‘Lavan’s Magic Projector,’ guests can actually reach out and hold onto the rail as they overlook the splendor below. Photo: Dreamscape Immersive

In Lavan’s Magic Projector: The Lost Pearl, you get a story within a story. The eponymous “magic projector” is a device that allows you to step inside a film—not unlike a VR headset. The Lost Pearl is the film you enter, casting you as explorers on the hunt for a precious artifact hidden inside an ancient temple. You begin in a virtual theater watching the film The Lost Pearl, but soon step through the black-and-white screen into a verdant jungle. It is a truly enchanting moment, enhanced further by the sensation of wind rushing against your face. Moments like these are what Dreamscape Immersive CEO Bruce Vaughn, formerly Chief Creative Executive at Walt Disney Imagineering, refers to as “Dreamscape moments.”

“We put an emphasis on the story. Story comes first, and the technology is there to enable immersive storytelling and experiences. So we put a lot of time and thought and design into the moments that blur the line between the virtual and the physical. We literally map those [moments] out in a certain kind of cadence,” Vaughn said. 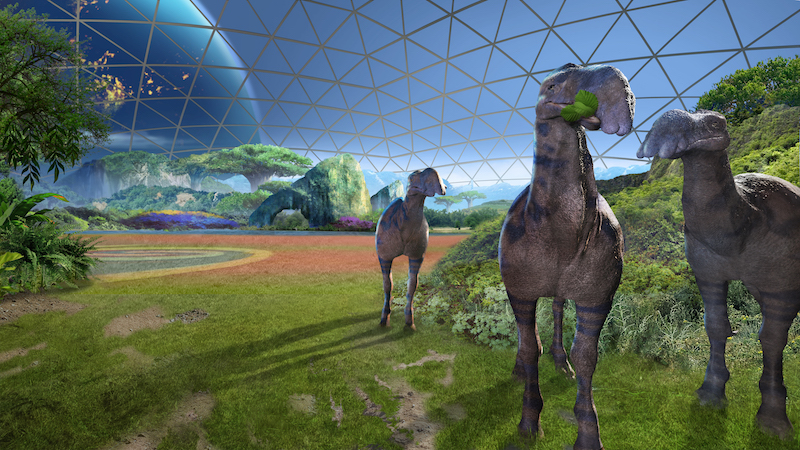 You can reach out and pet this curious creature in Alien Zoo. Photo: Dreamscape Immersive

In Alien Zoo, for instance, there’s a sequence during which a savannah full of alien creatures is revealed. It’s that ‘whoa’ moment you might remember from the first time you saw Jurassic Park. A group of horse-like creatures curiously trot up to your transport and when you reach out, that horse is physically present. You can stroke its snout, the way you might interact with an actual animal. In Magic Projector, you can grab a torch from a holder in a temple wall and use its firelight to interact with objects in the temple’s winding, booby-trapped corridors. At times, you are separated from your group. You can see them waving at you from across a deep chasm. You forget all about the much smaller black box you were standing inside back in the real world. In The Blu, you’ll hop on scooters and navigate your way through ocean trenches. When you sweep your hand through a school of fish, they sense your presence and scatter. When you approach the whale, you get so close that you can see the individual barnacles attached to the underside of its fin.

The one thing you won’t do in these experiences is shoot at monsters or robots or rack up points. While much of VR is rooted in gaming, Vaughn sees Dreamscape’s VR as a new medium with overlapping elements of immersive theater, theme parks, cinema, and gaming mechanics. The focus is on telling a story with a beginning, middle, and end, as with a piece of theater or a film. The gaming mechanics give the guests a sense of agency.  Instead of gripping a plastic gun, a guest might instead hold a flashlight, which allows them to light up and explore pieces of their environment as they will. As Vaughn explains, the guest isn’t just a voyeur in a 360 world, but becomes the interface. 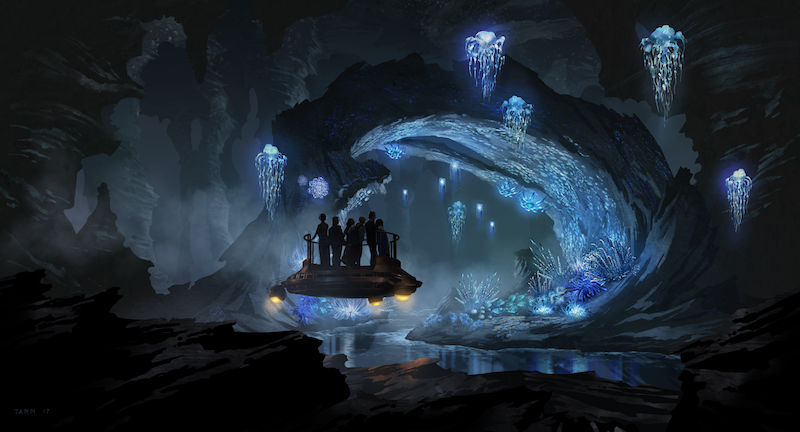 “You find that really allows our audience to find themselves in the center of the story. They might not think that when they step in, but by the end, it’s really about them. Wonderment and wish fulfillment is what we’re focusing on in the end,” Vaughn said.

He continues, “Because [the experience] is so sensory rich and because you’re experiencing that virtual world just like you do this one—you’re hearing it, seeing it, touching it, smelling it, feeling it—the memory of this functions more like a real memory from the physical world than it does [like] watching a movie. If you had seen [Lavan’s Magic Projector: The Lost Pearl] in a movie theater, you’d say, ‘I went to the movie theater and saw The Lost Pearl. I think when you talk about this now, you’d say, ‘I stepped through [the screen] and was in The Lost Pearl.”

This is an important piece when it comes to Dreamscape’s location inside a mall. While millennials have been accused of killing department stores—and napkins and light yogurt—malls have not been declining in popularity. Rather, malls have been changing their offerings. Bridget Johns of store analytics firm RetailNext told USA Today that while many anchor stores have closed, “a lot of those anchors have been replaced by more experiential-type environments like bowling alleys and high-end restaurants … that appear to be doing a really good job of driving traffic to those properties.” 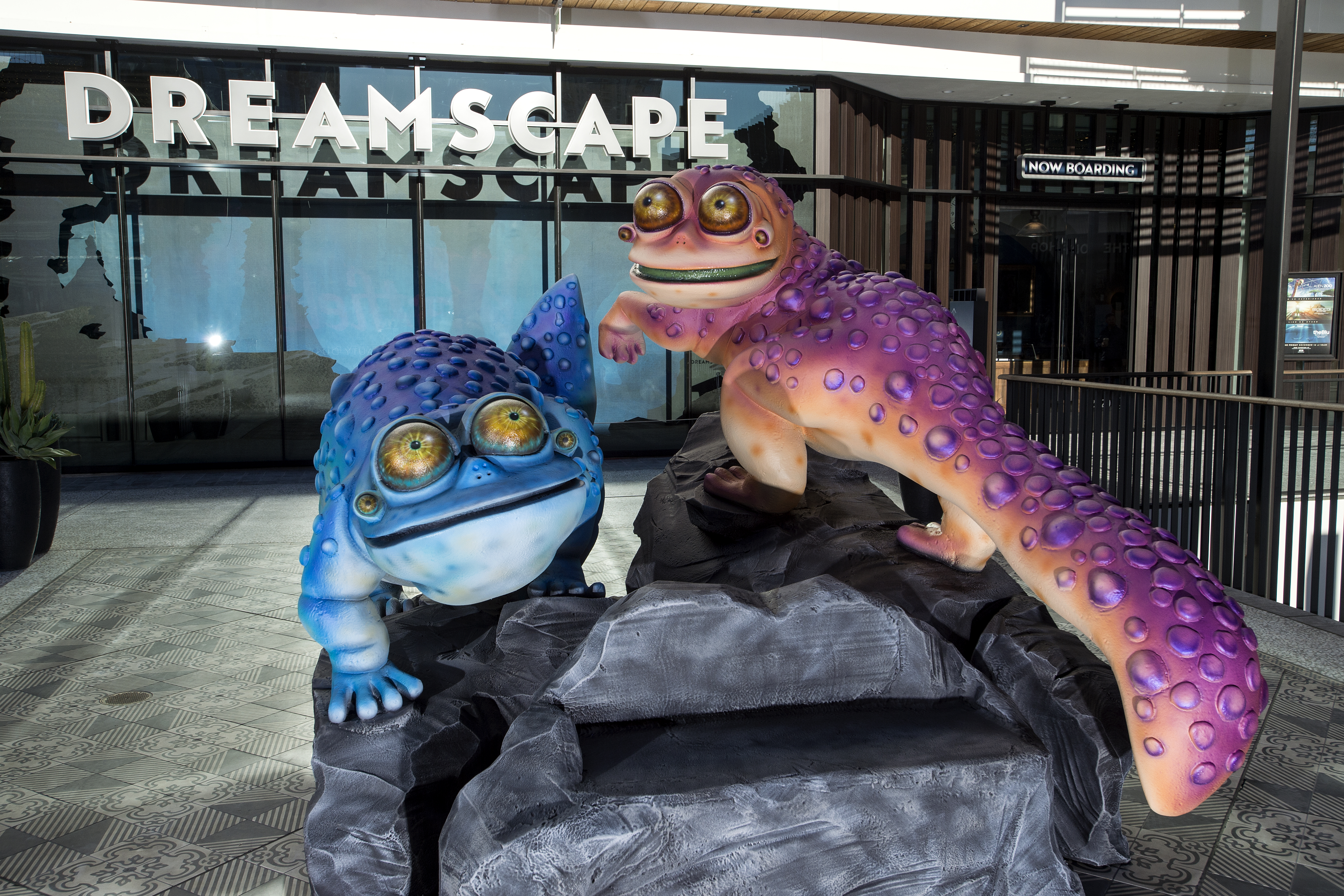 Guests can pose with Frog Cats outside the storefront. Photo: Dreamscape Immersive

Virtual reality experiences like Dreamscape Immersive and The VOID at the Glendale Galleria are just too sophisticated for at-home consumer headsets. You have to go somewhere to actually do them. And because they both run about 30-40 minutes, including on-boarding, participants are apt to make a day of it by eating at the mall, visiting various stores, or catching a movie. In fact, movie theaters—another industry striving to be more experiential to avoid millennials slaughter—are next for Dreamscape Immersive. A partnership with AMC will allow for the opening of four new locations across the U.S. in mid-2019, some stand-alone and others housed in movie theaters. As for the Century City location, it will remain the company’s flagship and will both add and rotate out new experiences in the future.

Know Before You Go:

Dreamscape Immersive is located at the Westfield Century City mall,10250 Santa Monica Blvd, on the 2nd floor near Eataly. Tickets are $20 each and can be purchased online (recommended to get your desired adventure at your preferred time) or in-store. Online tickets are subject to a convenience fee of $1.50. Each adventure can accommodate up to six people at a time. All are family-friendly, suitable for ages 10 and up.