Farmhouse Showcases the Best in California Agriculture, Thanks to Its Executive Farmer 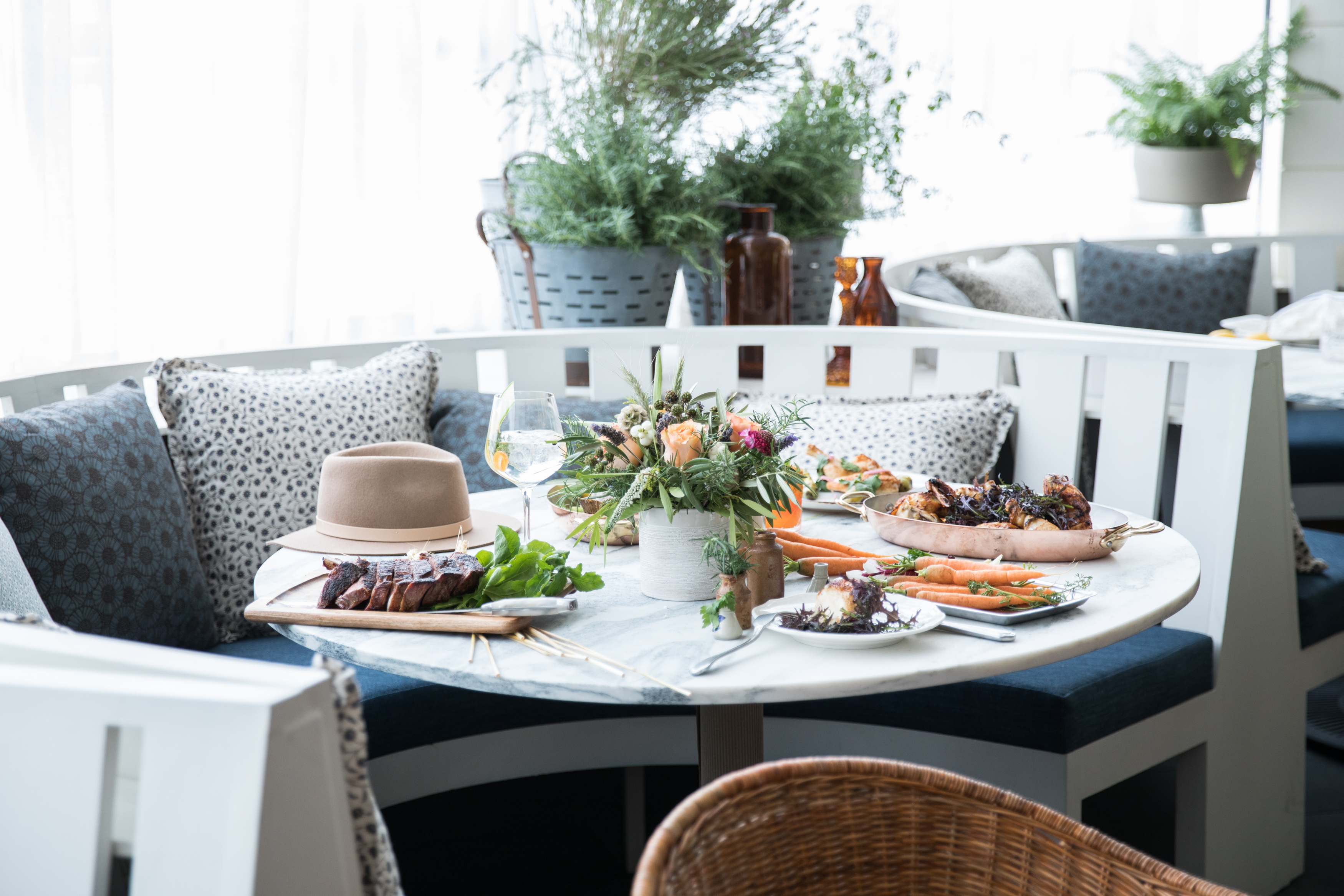 Chat with chefs around Los Angeles and you’ll hear a lot of them praise the quality of California produce and the joys of developing menus around weekly trips to local farmers markets. At Farmhouse, which debuted in the Beverly Center this March, the focus on farms is even deeper. It has an Executive Farmer who bases every menu item around seasonality, months in advance.

Farmhouse comes via Fig & Olive founder Laurent Halasz and Kenter Canyon Farms‘ Nathan Peitso. Before his turn as a restauranteur Peitso had been a farmer all his life. Peitso met Halasz when selling his family’s produce to Halasz’s restaurants. The two became fast friends, and Peitso shared with Halasz his long-held desire to open his own place. When Halasz connected with the Beverly Center to open a new dining option in the revamped mall, the opportunity for collaboration presented itself. Now, Peitso is sharing his passion for California agriculture via Farmhouse, which serves as a bright, airy showcase for the region’s bountiful offerings.

“A lot of restaurants don’t understand what true seasonality is because they’re not connected to it,” Peitso said. “You can tell good produce from bad produce, but even in the good produce strata, there’s a whole lot of variation. I source from what I know to be the best California has to offer, and I do that month after month. I see [Farmhouse] as a jewelry box; it should be the best stuff available, prepared simply, so that you can get excited about the ingredients.”

“People are surprised; it’s sweet, it’s good, and it’s a way you haven’t had [brussels sprouts] before,” Peitso said. 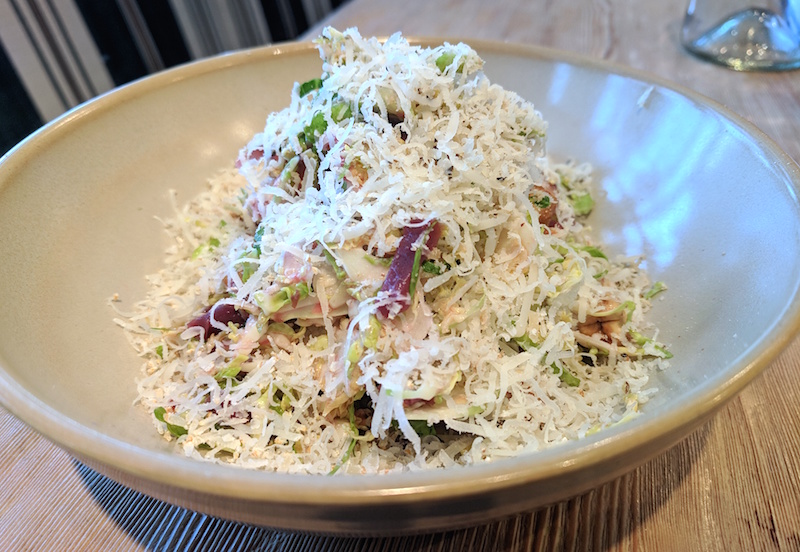 Their zucchini soup is a vibrant green, bright, nutty soup, which can be served vegan or garnished with Cotija cheese. June is the best month for zucchini, Peitso said, when it’s dense, not watery, and flavorful like a butternut squash.

“People say they don’t like zucchini because it doesn’t taste like anything, but if you try it now, that’s not the case,” he said.

To ensure he has the best produce at the best possible times, preparation begins months in advance.

“We start with…what we’re going to put on the menu in any given month. I know what’s in season, so we might say ‘okay, for [July], we’re going to do a lot of eggplant,'” he said. “We make our eggplant dishes based on varieties that I know will be available and I know, farm-wise, who grows the very best eggplant. I’m in communication with them in advance, when they actually have to plant the eggplants, and giving them an estimate of how much I’m going to use. And that’s the beginning for absolutely every dish on our menu.”

Peitso forged a connection to farming early on. His mother, Andrea Crawford, once worked as a server at Alice Waters’ Chez Panisse in Berkeley. That’s where his parents met and where he ate his first solid food as a youth: “Smoked snails.”

Crawford’s green thumb shone when she began growing baby lettuce in her backyard, which Chez Panisse would use in their salads.

“At that time, lettuce was only big heads—iceberg and romaine,” he said. “What she was growing was really innovative, and it spread like wildfire. Everybody wanted it. She couldn’t grow enough. She went to the front yard, her friends’ yard, and empty lots all over Berkeley.”

Eventually, Wolfgang Puck hired the family to move down to Los Angeles and grow salad greens for his restaurants. Today, they have a network of farms, ranging in size from six to 300 acres. They produce herbs, salad greens, avocados, and tomatoes, with fields spanning as far north as as Hollister in San Benito County and as far south as El Centro in Imperial County.

In the summer, they’ll grow in the north, then move production south, to the desert, come winter. Wheat is the last crop they grow in Imperial County before leaving the ground to lie fallow until autumn. They plant heirloom varietals, some of which Peitso said haven’t been grown in centuries. The wheat grows tall and is dried out by the sun before they harvest it, mill it into a flour, and blend it themselves. It appears on Farmhouse’s menu in the form of bread, buns, pastas, pizzas and flatbreads.

The dough is made with wheat grown by Kenter Canyon Farms. Photo: Courtesy of FARMHOUSE Restaurant

Not everything on the menu is from Kenter Canyon Farms, though. If there’s another farmer who can grow it better, Peitso doesn’t hesitate to approach them. The aforementioned best eggplant grower, in Peitso’s opinion, is Kong Thao of Thao Family Farm in Fresno. At one point in time, Thao’s parents were farmers in Laos. Thao was born in a refugee camp in Thailand, then moved to the U.S. with his family when he was just a boy. Like Peitso, he’s been farming all his life. Peitso sources basils, cilantro, cucumbers, long beans, and zucchini from Thao, too.

Peitso gets his root vegetables from Weiser Family Farms in Tehachapi, and his beef from Creekstone Farms in Kansas, which he’s personally visited to ensure the animals are ethically raised. Even the alcohol is carefully sourced. The wine all hails from the West Coast, while their house vodka, OUR/Vodka, is distilled in downtown Los Angeles.

Though the menu changes frequently depending on what’s in season, you can check out what’s cooking on their website. Each month, Peitso chooses at least a half-dozen ingredients to showcase, with items subject to change based on the mercurial nature of our planet. For instance, Peitso just removed an artichoke dish from the menu due to the product quality being less than expected. It’s a lesson he learned from his mother: “never compromise on ingredients.”

As he explains, “It’s so much easier to cook with the best ingredients rather than make apologies for the worst ingredients.”