Originally a Spanish ranch where lima beans were grown, Beverly Hills has evolved over the decades into a city now wholly synonymous with luxury.

With famous residents, world class shops, and a namesake television melodrama from the 90’s, it might appear Beverly Hills is exactly what you’d expect. All glitz and glamour.

But when you look just a bit deeper you begin to realize the city is more than the sum of its boutiques.

The purpose of this guide is simple:  Highlight some of the key sites and landmarks in the 90210 to keep in mind next time you’re off to explore the neighborhood.

From the world-class cultural hubs and art galleries to architectural landmarks and haunts frequented by Old Hollywood stars, we think there will be plenty to surprise visitors and locals alike.

Now, where to start…

[RELATED: 75 Fun & Free Things to Do in L.A. Every Angeleno Should Try] 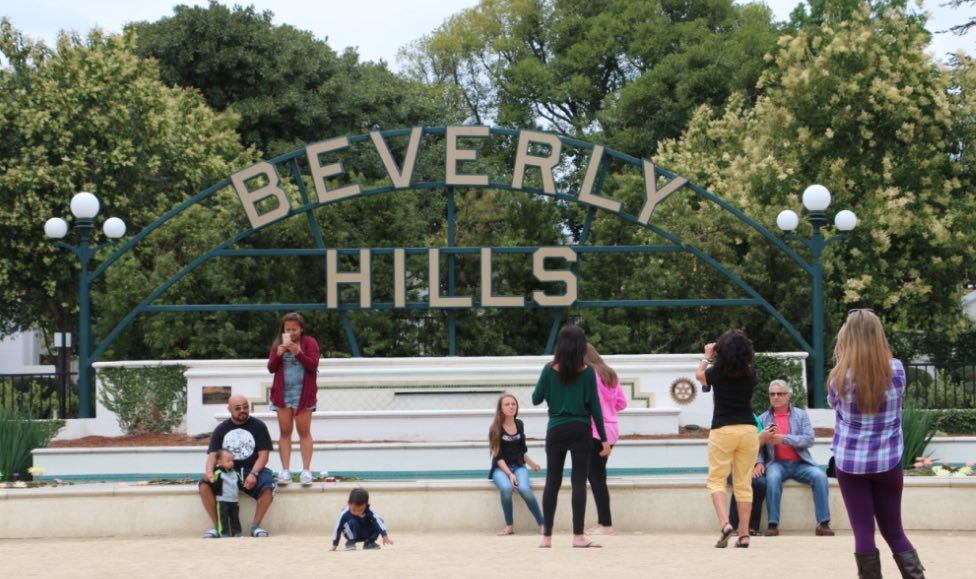 Beverly Gardens Park. Photo by Brian Champlin / We Like L.A.

The park is home to the iconic and Instagram-worthy 40-foot long“Beverly Hills” sign. Beverly Gardens stretches for nearly two miles and features cactus and rose gardens and two fountains. The park also plays hosts to the Beverly Hills Art Show on the third weekends in the months of May and October.

Opened in 1915 as the first municipal park in Los Angeles, Will Rogers Memorial Park was originally dubbed Sunset Park until 1926 when entertainer Will Rogers was appointed the first “Honorary Mayor of Beverly Hills” and renamed the park. Another fun fact, the five-acre park was actually gifted to the city by the Beverly Hills Hotel who initially preserved that land as their front lawn. Today the scenic park features a pond, fountain, rose garden, a dragon tree and more.

“The Wallis” as it is simply known is a 70,000 sq ft venue that hosts world-class dance, theater, and musical performances. Free events include Dance Sundays with Emmy-award-winning choreographer and Fame star Debbie Allen. Ms. Allen instructs classes for salsa, hip hop, and tap on alternate Sundays during select seasons.

The Paley Center for Media focuses on the preservation and celebration of television, radio, and emerging media platforms through a collection of public archives and programs.The Paley Center’s permanent media collection (also available at the New York City location) contains over 160,000 television and radio programs and advertisements. In addition, the institution hosts special exhibits, screenings, and panel discussions with creators and stars, highlighted by their annual fall television previews. 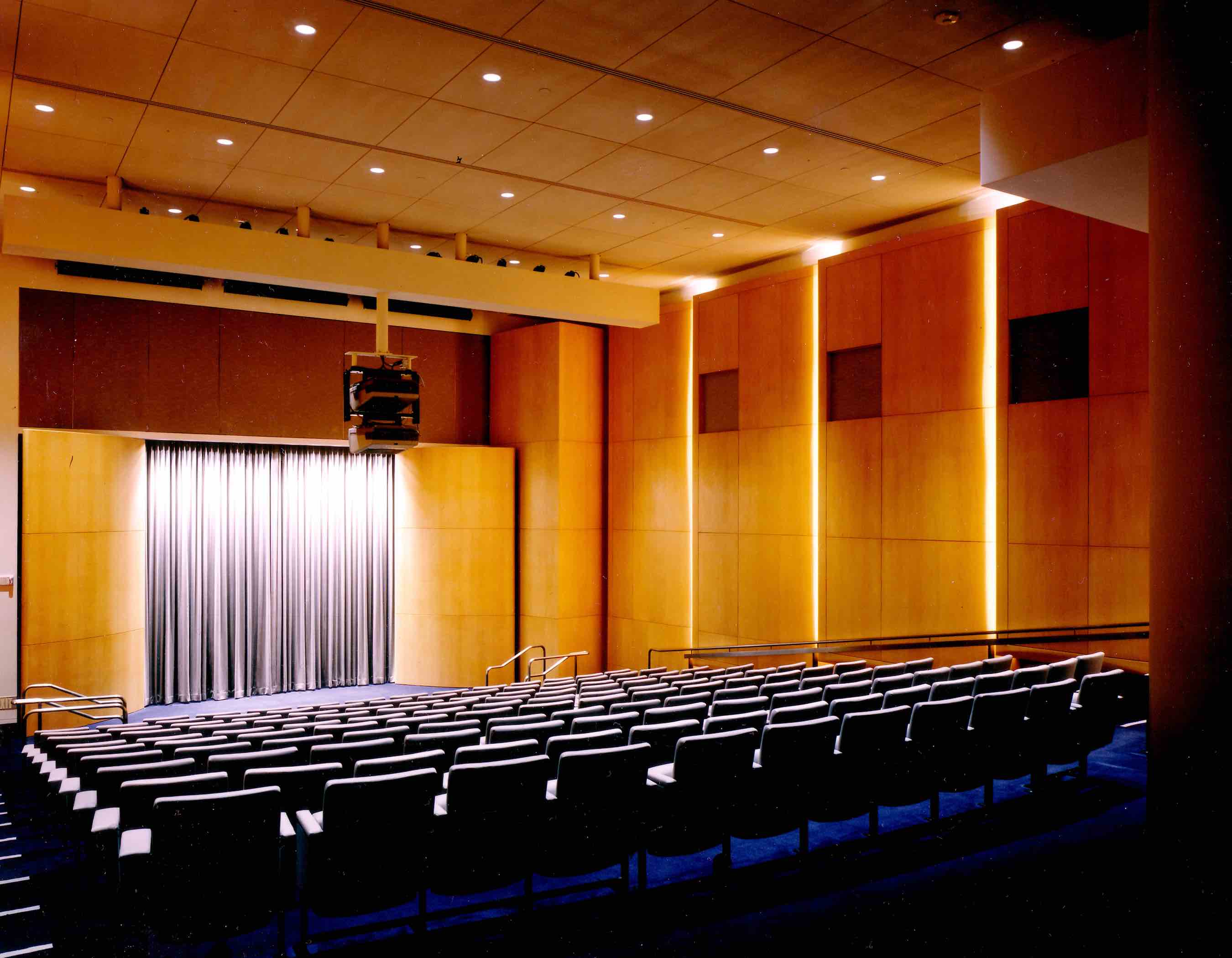 The Revolver Gallery is unique in that the focus is entirely on the life and work of, Andy Warhol. The gallery has access to over 150 original prints and paintings making it one of the largest gallery collections of Warhol’s work to date.

The Beverly Hills location of the Ace Gallery is an extension of the original on Miracle Mile. This annex, built in 2003, exhibits a selection of emerging and well-known artists including Roy Lichtenstein, Jeff Colson and Gary Lang.

This “Pink Palace” is set on 12 acres and has been a celebrity hot spot since 1912. The iconic hotel offers 204 guest rooms and suites, including 23 bungalows. In recent news the hotel has announced they’ll be redesigning the bungalows to pay tribute to Old Hollywood stars that stayed there including Elizabeth Taylor, Marilyn Monroe, and Frank Sinatra. Hotel guests and visitors can enjoy a meal at the Cabana Café or the Polo Lounge restaurant while Bar Nineteen12 serves up refreshing cocktails with a fantastic view of the city. 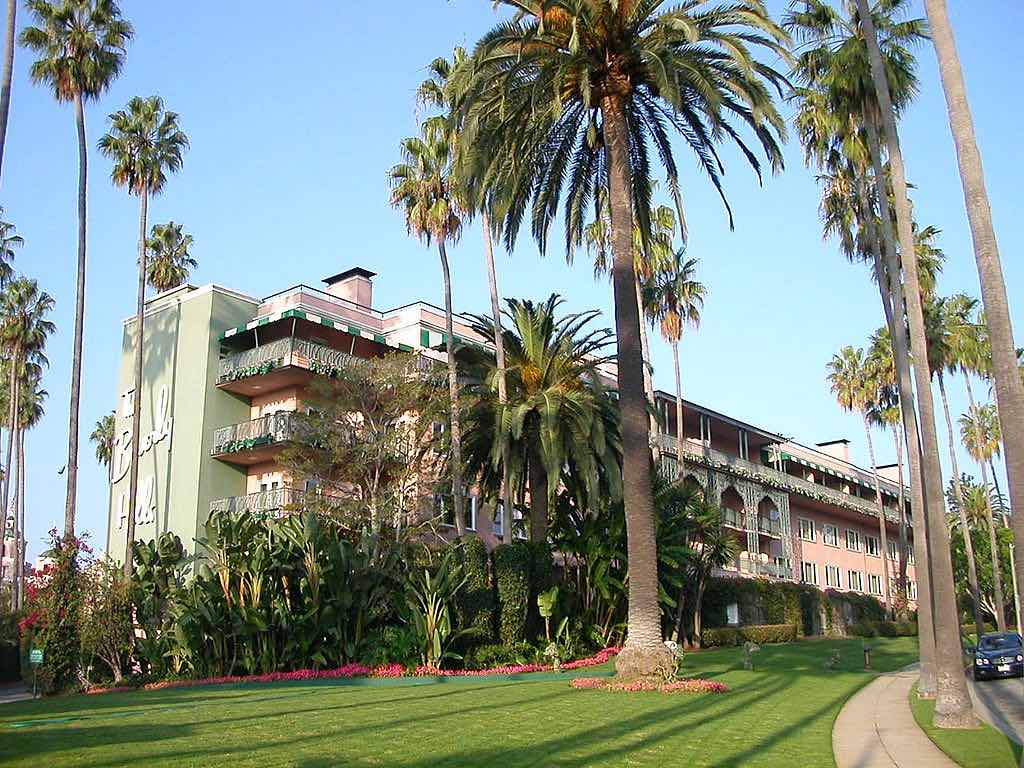 This expansive weekly farmers market hosts over 60 stands and even features live music and even a petting zoo. They also host special events including a annual Pie Bake in June, PickleFest in August and Cookin’ Kids, an educational workshop held on the second Sunday of each month. The market hours are every Sunday from 9 a.m. to 1 p.m.

Purchased by the city of Beverly Hills in 1965 from Edward Doheny, Jr., Greystone Mansion has became one of the most beautiful public city parks in the city of Los Angeles, attracting tourist and locals with its breathtaking views and lush gardens. Included in the National Register of Historic Places the estate can be seen in numerous films and photoshoots. While the mansion is only open during special events the park grounds is open every day till 6 p.m. 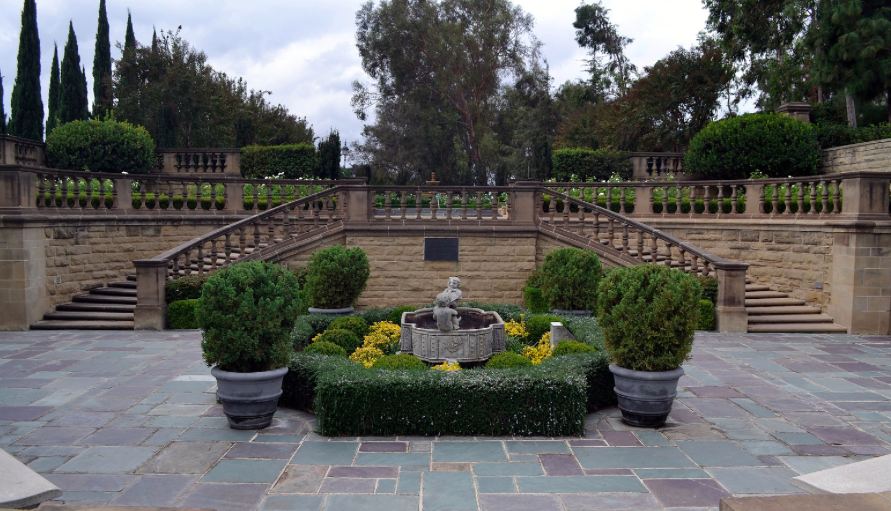 Known as “The Witch’s House,” the architecture truly gives off Hansel & Gretel vibes with its exaggerated and intentionally decrepit design. Dreamed up by art director Harry Oliver in 1921 on the Willat Studios lot in Culver City, the house was moved to its current location on the corner of Walden Dr. and Carmelita Ave. in 1924. The 3,500 square feet home is currently a private residence and not open to the public for visits but remains a popular spot for shutterbugs on tour buses and beyond.

On the famous Rodeo Drive between Dayton Way and Brighton Way is Frank Lloyd Wright’s last built project in the Los Angeles area. Anderton Court is a three-story building of shops and boutiques with a geometric mast typically found in some of Wright’s later works.

Virginia and Harry Robinson were the couple behind the Robinson’s department store and their residence was one of the first luxury estates in Beverly Hills. Built in 1911, the estate sits right behind the Beverly Hills Hotel and covers about six acres, including five gardens and a pool pavilion. They offer guided docent tours by appointment Tuesday through Saturday. 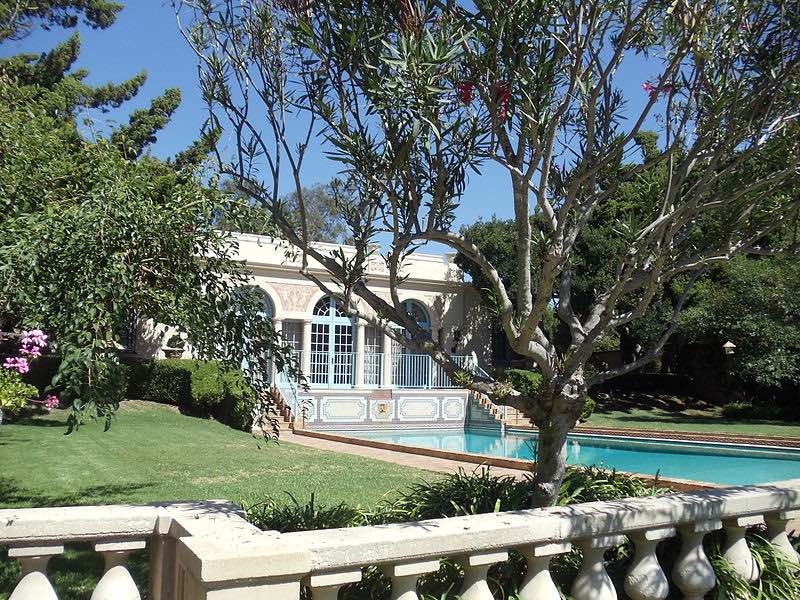 Pool at the Virginia Robinson estate. Photo by Zigzig20s via Wikipedia commons

Beverly Hills was incorporated in 1914 and the city hall designed by William Gage was completed in 1932. The Spanish Renaissance style building features eight-story towers and a tiled dome and gilded cupola.

The two-mile long street is synonymous with Beverly Hills. Known for the three block stretch of luxury shops like Cartier, Louis Vuitton and Prada, its iconic status makes it a tourist attraction 365 days a year. Visit the Rodeo Drive Walk of Style plaques on the sidewalks dedicated to bold names in fashion and at the intersection of Rodeo Drive and Dayton Way, the nude sculpture entitled “Torso” created by world-renowned sculptor Robert Graham can be found. Luxury department stores are also located near Rodeo Drive including Barneys New York, Saks Fifth Avenue and Neiman Marcus.

Know of more fun stuff to do in Beverly Hills we should add to the list? Shoot us an email at [email protected]