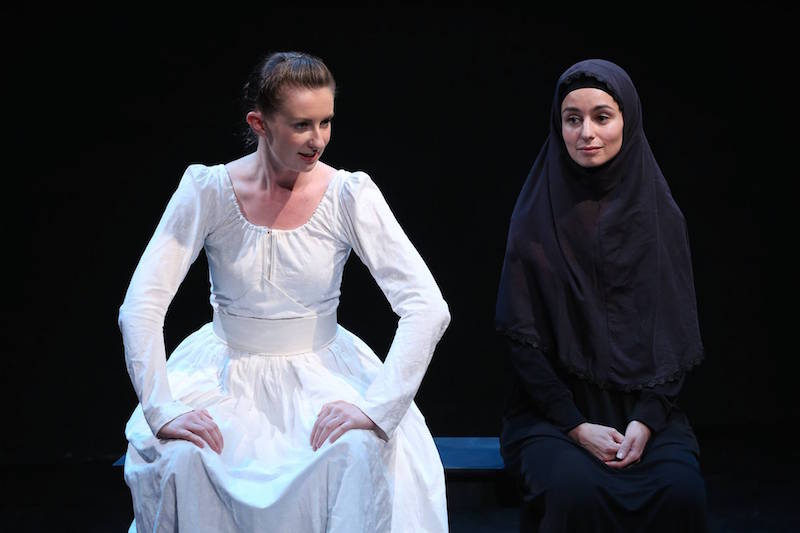 The 2018 edition of Hollywood Fringe takes place May 31 through June 24 bringing over 350 unique shows to Hollywood—many of them affordable, fun, and occasionally interactive works you’re not likely to see anywhere else. With tickets now on sale, we thought we’d list some of the shows we’re excited to check out and tell you how you can see them.

What is Hollywood Fringe Festival?

Fringe festivals are unjuried, indie theater fests that occur all around the world, offering playwrights and performers the chance to present or workshop their pieces. Anything goes at these fests, from powerful social justice narratives to strange immersive shows that shatter the fourth wall. Fringe fests originated in Edinburgh, Scotland in 1947. Hollywood Fringe kicked off in 2010.

Where are these shows?

They’re all located in the Hollywood Fringe zone, which is centered around Hollywood Theatre Row on Santa Monica Boulevard. Technically, the zone extends from Franklin to Rosewood, and from Normandie to Gardner. Play your cards right when buying tickets, and you might be able to see several shows within walking distance from one another in a single day.

It should be noted that not all venues are traditional theaters. Sometimes, shows take place outside, in private apartments, in bars, or even in vehicles.

Okay, how do I find shows to see?

You can visit the Hollywood Fringe website here. You can browse shows by tags and categories, like comedy or musical. This is also how you can find events and workshops, where you can learn everything from stage combat to how to pitch your play to Netflix.

Starting May 1 at 11 a.m., you can purchase tickets online. See something you like? Leave a review.

One of our favorite Fringe shows of yore was the deceptively simple A(partment 8), which took place entirely in playwright Annie Lesser’s bathroom with just a single actor: the versatile and ever-engaging Keight Leighn. Lesser is back with another single-actor show, but this time, the sole performer is Lesser herself. Death and Coffee is a 15-minute, one-woman, autographical, immersive show surrounding death, grief, and loss. If it’s anything like Lesser’s other works, 15 minutes should be more than enough for something impactful to occur. $10.

One of my favorite Fringe shows in 2017 was Capital W’s Red Flags, in which I, as a solitary audience member, went on a blind date with a troubled woman named Emma (Lauren Flans). The memorable show took place over the course of a beer at a public bar, with Flans’ knack for improvising her way through our dark, sometimes funny, but ultimately disastrous date leaving me thoroughly impressed.

This year, Capital W has partnered with DryCræft (The Society) on a show “exploring questions of faith, identity, service, and family through a day in the life of a young urban pastor and his teenaged child.” The show is based on actor Thaddeus Shafer’s youth, and is staged for only 10 audience members at a time. Though the show will begin and end in Hollywood, guests should expect to visit multiple locations. $50.

I don’t know what Snow Fridge is, really, except that it’ll be held at Pig & Whistle. Their description is this:

“Hello. Welcome to Snow Fridge. You are here, at the beginning. Our purpose is to see you through your story. The one you will experience through this individual, improvised, immersive show that began right here, at your beginning. Your show will be unique, created for you alone. Hello. Welcome.”

Why would I be excited about a show if I don’t know much about it? Well, it comes via two immersive actors—the aforementioned Keight Leighn and Karlie Blair—who have been great in everything they’ve ever been cast in, including Whisperlodge and Safe House ’77. So if you feel like going down a weird rabbit and you’ve got $25 for a ticket, why not?

In this piece from Kristen Boulé, Tiffany Asta, and Allison Sulock, guests will be taken on an interactive journey through a post-apocalyptic world. The show is based on poet T.S. Eliot’s “The Waste Land,” the poem that defined April as the cruelest month. In Unreal City, the wasteland is where you, as an audience member, live. Except the Queen has announced a lottery to get out of that hellscape and become a newly minted resident of the posh Unreal City. Your hour-long quest will take you through a variety of indoor and outdoor locations. $25.

The setting is a college lecture hall, where a clinical test of the fight or flight response is taking place. They’re calling it a “choose-your-own adventure play,” as the audience’s choices will affect the outcome of the tests—and it’s probably going to get a little creepy.

This is not the first time creators Jared Tyrel Pixler and David Evan Stolworthy have experimented with this format. In their work The Video Games, classic video game characters served as tributes in a Hunger Games parody.  Audience members would vote on who they wanted to win each match. Tickets to The Study are $10 to $20.

One Last Thing Before You Go

One audience member will be admitted to this show at a time, and decisions made will influence the outcome of the experience. Creator Aaron Vanek notes that while it may be eerie—with total darkness, fog, and a disturbing soundscape—it’s not a haunted house where creature are just waiting to leap from around a corner and startle you. The show will deal with themes of death and “the border between life and the afterlife.”

If you’d like to know more, you can find a link to plot and FX spoilers here. But if you’d like to experience it as it comes, it’ll probably be more exciting. Tickets are $30.

It’s hard to go wrong with a ghost story, and The Unmarked Door‘s The Witnessing is just that.

The Davidsons are a family who, between 2008 and 2010, experienced unexplained paranormal phenomenon in their Utah home. They eventually called on Daugherty Paranormal Research Center for help. The Davidsons later encountered journalist Sterling Powers in a national park, and agreed to allow Powers to tell their story. The Witnessing is an multi-sensory journey into the case using artifacts from the investigation.

This piece combines theater with VR. As an audience member, you are one of six new employees at Closure, Inc., a tech company that helps to identify what went wrong in failed relationships. Your first assignment is to use a VR headset to access the memories of a recently split couple and figure out why, exactly, they broke up. Though the assignment is meant to be simple—it’s your first one, after all—it turns out to be anything but. $20.

The plot follows Detective John LaGrasse, who is on the trail of a murderer, and Francine Thurston, whose uncle has mysteriously disappeared. They soon learn their individual cases are more entwined than previously thought. $20.

Playwright Henry Naylor’s Echoes was a hit at Edinburgh, Adelaide, and Prague Fringe fests, and is now making its L.A. debut. The Guardian called it a “dark and daring look at colonial cruelty,” but noted that Naylor, who typically writes comedy, was able to infuse the script with bold jokes.

The plot: “A 15 year old schoolgirl jihadi. An educated high-society 17 year old girl in Victorian England. Born 175 years apart, yet both facing the similar horrors ahead of them as they travel towards the East.” $15.

For more information on these, and other shows at this year’s Hollywood Fringe, visit www.hollywoodfringe.org.