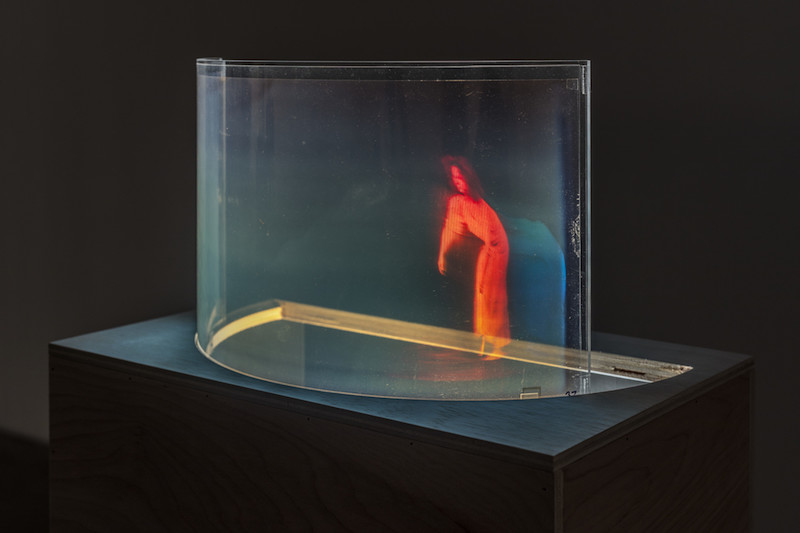 LACMA’s latest exhibition, 3D: Double Vision is a survey of 3D art, dating as far back as 1838, when the stereoscope had just been invented by English scientist Sir Charles Wheatstone.

Sometimes, 3D images feel like the future. Not necessarily the one we will have, but the one imagined by those who lived before—the kind of future where you’d live in a silver dome and drive a hovering Trans Am. When I told this to Britt Salvesen, Head and Curator, Wallis Annenberg Photography Department and Prints & Drawing Department, she nodded.

“I think ‘futuristic’ is a great word for [3D], and another word that I often find in the literature is ‘utopian,'” she said. “Dream of the perfect image, the perfect mode of representation of the ultimate realism. That kind of rhetoric occurs again and again. That’s sort of the frontier that image makers are always going for.”

Double Vision takes over the Art of the Americas building (where you may have seen Guillermo del Toro: At Home with the Monsters, also curated by Salvesen) and has been divided into five sections. The first serves as an introduction to 3D, while the rest move chronologically from the Victorian era to the present.

3D works via binocular vision: essentially, two eyes take the information they receive and convert it into one, volumetric image. This is also how a stereoscope works. It offers two nearly identical images, each taken from a slightly different perspective, and presents one to each eye. Your brain does the rest of the work, merging the two into a single image with depth. It doesn’t work for everyone; an estimated 5 to 15 percent of people may have stereo blindness, meaning it’s difficult for them to see 3D images the way they are intended. Yet enough people were excited by 3D imagery that the medium took off. 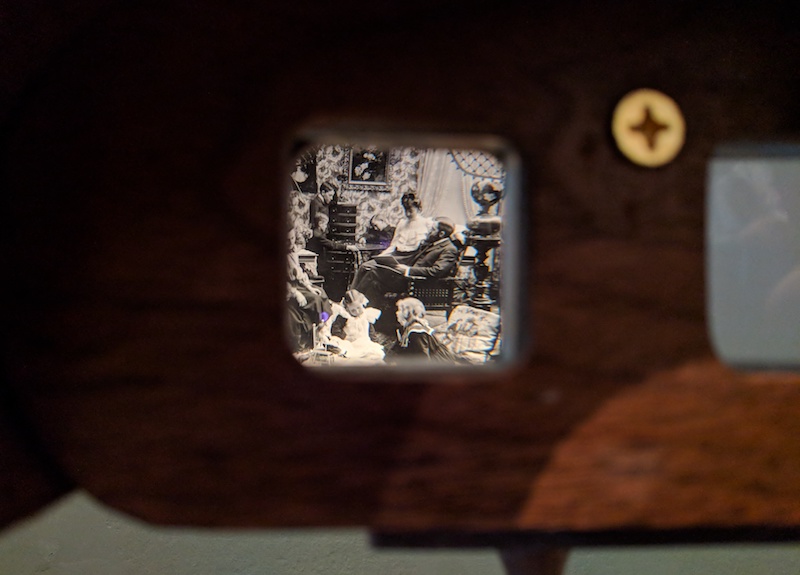 Salvesen was focused on the 19th century in her graduate studies, writing her doctoral dissertation on Victorian stereoscopy. She became secifically became interested in how 3D became “massively popular in a very short time.”

“I wanted to think about what was the craving that people had for the experience, and not just wanting to repeat it, but to collect and own it,” she said. “I was fascinated with that, and then kept getting curious about the next chapter. It seems like there is always a desire and an impulse towards that illusionism.”

Wheatstone’s stereoscope, which used drawings and mirrors, was cumbersome. In 1849, scientist David Brewster—inventor of the kaleidoscope–produced a more portable device which could be used to view stereocards. Stereocards featured two side-by-side images that would appear as one 3D image when viewed through the device. They became wildly popular, and Victorians would snatch them up from companies like the London Stereoscopic Company for at-home viewing. They’d immersive themselves in far-off worlds without packing a bag, a primitive harbinger of the 21st century’s consumer VR headsets.

The World’s Fair also played a large role in the growing popularity of 3D imagery. The stereoscope made an appearance at The Great Exhibition in London in 1851, supposedly enchanting Queen Victoria. The View-Master made its debut at New York’s World Fair in 1939. At that same event, auto company Chrysler revealed a short 3D film titled In Tune with Tomorrow in which a 1939 Chrysler Plymouth is assembled, seemingly by magic thanks to stop motion animation. The film was so popular that it was redone in technicolor and presented again during the fair’s second season. This was the first time many people were exposed to 3D cinema, but Hollywood would start cashing in on the gimmick in the ’50s.

Guests to 3D: Double Vision will be able to view In Tune with Tomorrow, multiple iterations of stereoscopes and dozens of stereocards, a host of 3D cinema, and several more modern illusions. Various types of 3D glasses are available throughout the exhibit space, while signage indicates which one is best for each piece. There are enough things to look at and watch that one could easily spend a couple hours inside.

As guests enter, Thomas Ruff’s 3D-ma.r.s.80 (2013) offers two large, grayscale images of Mars’ surface, the craters deepening as soon as one slips on their red and blue glasses. Nearby, artist Tristan Duke’s Platonic Solids (2015) offer hand-drawn holograms on nickel-plated coppers discs. There are five of them, and on each, a geometric figure dances and shimmers. 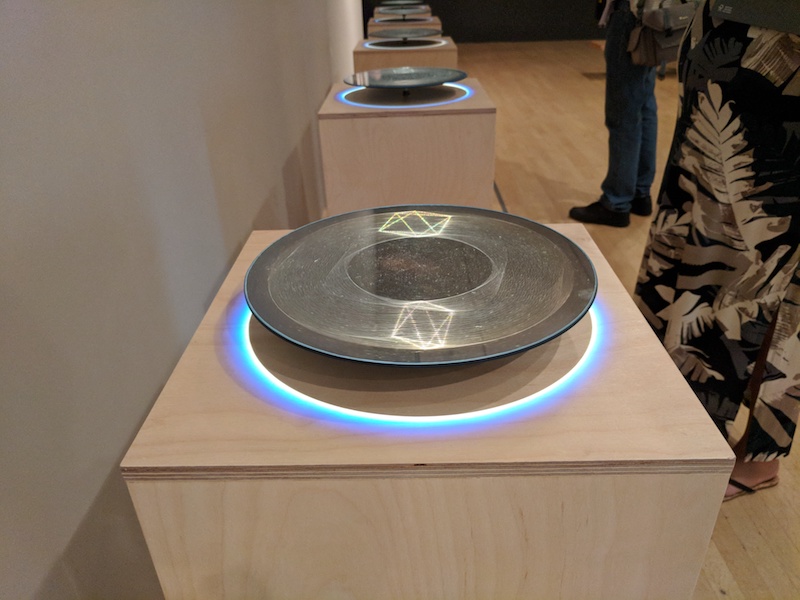 Among the many stereocards depicting beautiful places and historic events, one will find a collection 19th century French Diableries. These hellish, yet humorous images depict skeletons and demons getting wild in the underworld. When backlit, the black and white images change. Eyes glow red, as light shines through tiny pinpricks. Viewers can activate the light by pressing a button on the display. (You can see some Diableries, appropriately set to Bauhaus, in this video.)

In a dark theater, a 25-minute montage of various 3D clips plays on repeat, ranging from mid-century B movies to modern film and animation. Definitely stay to see the trailer for The Maze, a 1953 horror flick in which a man breaks off his engagement after inheriting a Scottish castle from his uncle—not exactly an original conceit, but a delightful horror trope, nonetheless. His suspicious fiancée follows him to Scotland, only to experience a cavalcade of horrors inside the eponymous maze. Plastic bats and cobwebs dart out from the screen, eliciting more laughs than terror.

Other notable pieces include Simone Forti’s hologram piece Striding Crawling (1975-78), in which a holographic figure does just that, vaguely reminiscent of the desperate message Princess Leia sends to Obi Wan Kenobi in ’77’s Star Wars: A New Hope.

Then there’s the exhibit’s largest work, at least in terms of scale: Michael Snow’s sculpture, Redifice (1986). It’s a hulking, red box, about eight feet high and 20 feet long. It’s peppered with windows, some of which contain holograms, sculptures, or dioramas. Salvesen named it as one of the pieces she was most excited to display.

“It’s like if you were looking into a skyscraper,” she remarked. “It’s just so effective and fun.”

Near the conclusion of the exhibit is a series of holograms by Ed Ruscha, each one appropriately declaring it ‘the end.’ Continue down a hall with your glasses on to see Peggy Weil’s 3D Wallpaper, originally presented in 1976 and redrawn for Double Vision. Though this is sure to become the designated selfie spot, Double Vision isn’t the kind of exhibit one can simply view through other people’s photos. Many of the illusions can only be seen with the human eye, making it a truly interactive and immersive show that Instagram alone could never do justice.

3D: Double Vision is part of The Hyundai Project: Art + Technology at LACMA. See it on display in the Art of the Americas building July 15 through March 31. Visit LACMA online to keep up with exhibit-related programming, including a screening of ‘The Maze’ at Aero Theatre in Santa Monica on August 9.