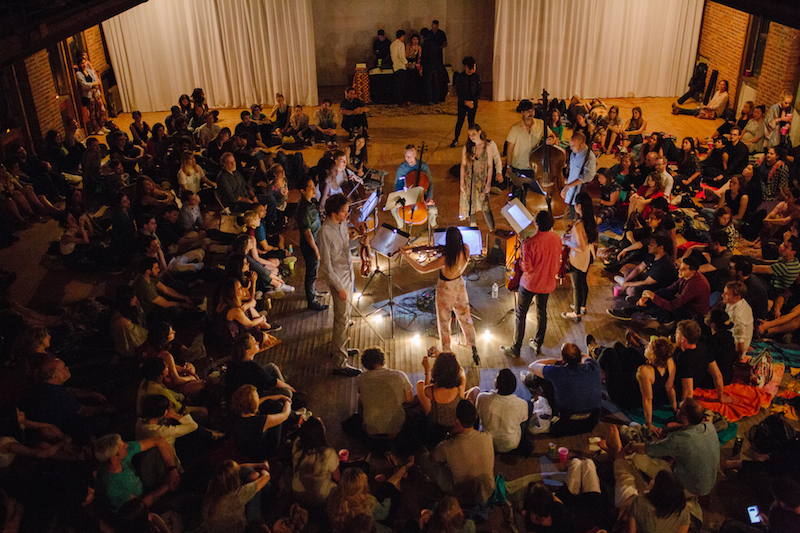 Groupmuse is changing the way we listen to live classical music. No black tie apparel is required for these informal, friendship-focused concerts, which can take place in living rooms, rock climbing gyms, Masonic Temples, or warehouses. The East Coast-based company is throwing first its Los Angeles Massivemuse—essentially a Groupmuse, but larger—on Friday, April 13 at a percussion warehouse in Frogtown.

Groupmuse was founded by Sam Bodkin, who fell in love with classical music the first time he heard Beethoven’s “Groβe Fuge, Op. 133.” Thanks to the ‘great fugue,’ Bodkin became “an overnight evangelist” of classical music.

“I was just filling my head with this music at every juncture,” he tells We Like L.A. “Waiting in line at Starbucks, it was a Mozart violin concerto. Walking to class it was a Bach organ masterwork or something like that. I decided within about a year that I was going to devote my life to expanding the listenership of this form of music that had added so much beauty to my life, but had grown so far from contemporary culture.”

Of course, this was in 2008, when Bodkin was 19. Bodkin’s peers initially thought it was weird that he loved the genre so much. Though these compositions have been around for centuries, they’re not often heard at youth-focused events. Bodkin would eventually find likeminded friends within a group of musicians who gathered at the Boston home of pianist Cristian Budu. Here, musicians with the New England Conservatory routinely played chamber music for one another.

“All these amazing musicians would inspire one another, but they would also just have a really great party,” Bodkin said. “So, I would attend these things as the only non-musician, and for me, it was a totally mind-boggling experience that was both so affirming and enriching from a spiritual perspective, but then also just a lively throwdown with awesome people.”

After Bodkin wrapped up his poli-sci degree at Columbia University—a degree he describes as “useless” in his company bio, given his life’s dedication to classical music—he formed Groupmuse. The premise is simple: anyone who has an available space can invite musicians to come and perform, and audience members to sit and listen. It takes the compositions out of cavernous concert halls, and homes them in warm, intimate spaces. But Bodkin doesn’t completely disregard the concert hall either. Groupmuse also partners with local organizations to sell discounted tickets to more traditional performances.

Since the first Groupmuse was held in Boston in 2013, there have been over 3,000 such events in cities including New York, Denver, and San Francisco. Anyone can host them, and hosts and audience members can connect via Groupmuse’s online platform. 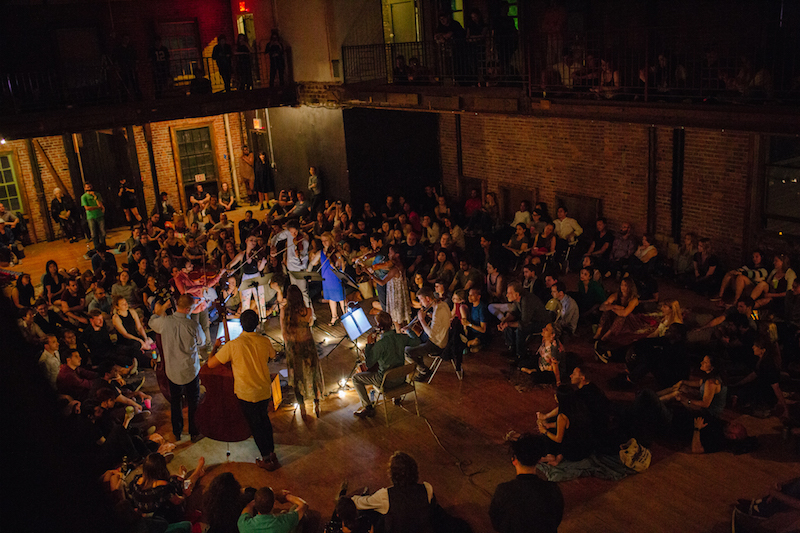 Groupmuse also hosts Massivemuses, which are large-scale Groupmuses produced by the company. This Friday guests will assemble at CalPercLA, a percussion warehouse in Frogtown, for two performances: a Joseph Haydn string quartet from the Canosa Quartet, and an avant-garde percussion performance from Jonathan Hepfer and the CalArts Percussion Ensemble. Bodkin estimates each performance to last about 25 minutes, with a generous intermission for mingling in between and more socialization afterwards.

“[Intermission] is kind of a core aspect to the experience because it’s just as much about community as music,” Bodkin said. “When people first arrive, you kind of stick with the folks you rolled in with. But after the first half and especially after the second, it’s a big mix and everyone is just alive and on fire with great art. That’s the promise of great art. I think what’s unfortunate about classical music right now is that the way in which it’s presented discourages that sort of celebration of what humanity is capable of. This miraculous music, that has survived for so many hundreds of years, is an occasion for celebration.”

Guests should expect to be seated on the floor, and are welcome to bring their own pillows, blankets, or cushions. Guests may also bring their own booze. Unlike traditional performances, guests are not expected to be completely silent. While not paying attention to the performance would be discouraged, clapping and “hooting and hollering” following a magnificent solo, the way one might do during a rock concert, is fine.

“Some of the best moments are when a [musician] makes a huge flub and everyone cracks up and they start again,” Bodkin said. “It creates this humanity around the experience.”

If Groupmuse sounds like your jam, you can buy tickets online here. (Tickets will not be sold at the door.) They’re $20/person, or $15 for Supermuser members. The event is 21+ only.

If you can’t make the Massivemuse, but are interested in attending (or performing at) one of the smaller, L.A. events, you can find them here.