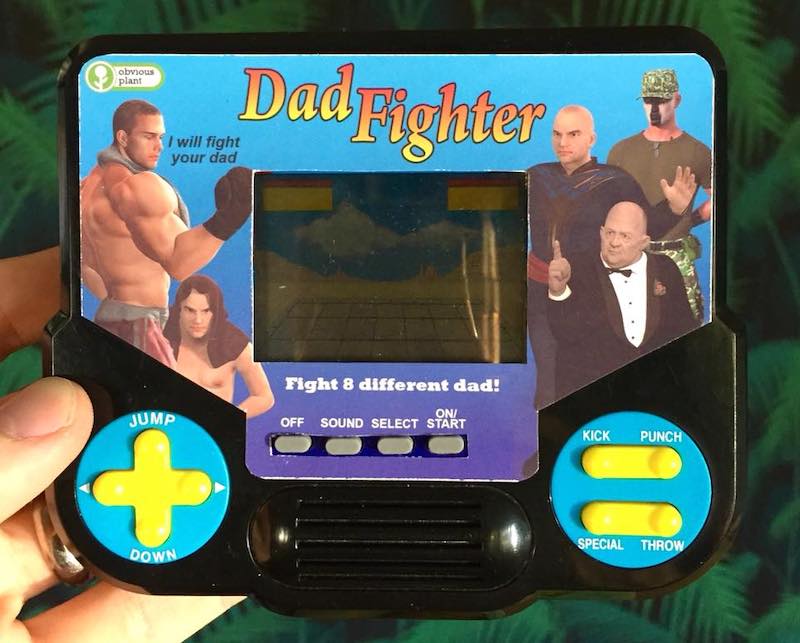 For four years now, Jeff Wysaski, aka “Obvious Plant,” has been surreptitiously inserting fake signs and products into everyday Los Angeles locations. There’s the time he added some little-known animal facts to habitats at the Los Angeles Zoo, like: “America’s first president, George Washington, was actually 9 koalas stacked on top of each other.” Or the time he added an artist’s statement card to a mirror in the men’s restroom at LACMA. The card read, “Reflection of a Hideous Man. Los Angeles, circa 2015. An ugly, disfigured man gazes into the abyss.” But it’s not just signs; Wysaski also adds fake toys and other products to store shelves. This includes his “Revengers” actions figures, with characters like “Regular Raccoon” and “Fedora Ron.”

This March, Obvious Plant will have a show of its very own—no sneaking required—for the first time. Obvious Plant’s Museum of Toys will offer a look at over 100 items, revealing an alternative timeline in which toys that never should have existed did.

Wysaski began his comedy career on the internet a decade ago with the website Pleated Jeans where he created and shared humorous content. This included the phony flyers he’d attach to telephone poles around his neighborhood. Though Wysaski dabbled with other forms of comedy, including webcomics, he kept coming back around to the signs.

“I realized there are a whole lot of other signs out there that are worth parodying, and I thought this might be a big enough idea to start something new,” he said.

He started by posting fake rules in Griffith Park in January of 2015.

“It was stuff like ‘no alpacas’ and just random funny stuff,” he said.

He later created fake book jackets, which he slipped over real books at Book Soup in West Hollywood. They were all self-help books and included the title So Your Son is a Centaur. He posted photos of the books online and soon received coverage from a variety of media outlets, including Buzzfeed. Book Soup was good-humored about the attention and ultimately set up a display for the fake books. Each one was priced in the millions of dollars.

“That’s the response I wanted,” Wysaski said. “I want the people who find [the plants], especially the store, to get a chuckle.”

Wysaski eventually decided to move from signs into fake products, like action figures, board games, and playsets. He makes them all himself, even the action figures that come packaged just like real toys. He prints the graphics onto photo sticker paper, which he applies to a cardboard back. He then uses tools to trim the edges and round the corners. He purchases plastic blisters online, which he fits over the toy and fixes with crafter’s tape. He offers a demo on his Instagram, if you’re curious.

Wysaski’s sense of humor tends to skew dark, juxtaposing cute toys and nostalgia with existential dread. One toy offers both man’s best friend—a big-eyed, fuzzy dog—and his worst, or, “the depression that inevitably consumes him.” Another toy is just a bag of air labeled “Muppet Screams.” A colorful board game is titled “Hello Kitty Goes to Rehab” and a neatly packaged 16-month calendar depicts “Lonely People Holding Cats… at least they have cats.” One might say Wysaski was ahead of the faux-cheery, late capitalism nihilism of corporate brands like Sunny D, which recently tweeted, “I can’t do this anymore.” And what better way to face the void than with something as innocent as a toy.

“There’s something about toys that have always been a draw to me,” Wysaski said. “They’re playful and there’s a lot of room for jokes or commentary. With toys, especially, it’s the corruption of the innocent and giving the world toys that should never exist. There’s been a whole lot of negativity and a whole lot of anxiety around what’s going on with politics and in a way, I think this is my way of dealing with it and trying to laugh with everybody about how bad things are. But in a sort of general sense of general anxiety, like, life is bad, but we can also joke about it.”

Those who show up to the Museum of Toys should expect to see over 100 items, including fake toys, actual toys with new names, and actual toys with fake facts. There will also be a few Instagram-worthy moments, if only because it is mandatory that all pop-up museums now have them. And if you feel like making a fake toy real in your heart, a gift shop will offer select items (including a small bag containing the tiny skulls of your enemies). Throughout the run, there will be pop-ups from special guests including Everything is Terrible and Poorly Drawn Lines. On March 9, there will be puppet performances via the Bob Baker Marionette Theater.

Obvious Plant’s Museum of Toys runs March 1-17 at Start Los Angeles, located at 2270 Venice Boulevard in Harvard Heights. A free opening reception will be held on Friday, March 1 at 7 p.m. Otherwise, tickets are $10 and can be reserved online here. Check the schedule here to see when special guests will appear.