Architect and cycling enthusiast Trevor Abramson is proposing a bridge that would allow convenient pedestrian and bike access over Ballona Creek and the mouth of the Marina del Rey Harbor. In an interview with Curbed LA, Abramson said this bridge could be the solution to a detour cyclists must take when riding the Marvin Braude Bike Trail.

The Marvin Braude Bike Trail, previously known as The Strand, is a paved bike path that extends over 20 miles along the coast from Will Rogers State Beach in Pacific Palisades to Torrance County Beach. When the path reaches Marina del Rey, it diverts inland to get around Marina del Rey’s eight basins.  Abramson’s dream bridge would span 1,400 feet over the mouth of the harbor and Ballona Creek, allowing cyclists and pedestrians to bypass that detour.

Renderings via Abramsom Teiger Architects, where Abramson is design principal, reveal a white, steel bridge described as a “five percent sloped spiral ramp that is nestled within a latticed shell structure.” The firm envisions the bridge as an “iconic gateway and viewing platform,” with the bases on either side acting as possible event or gathering spaces. 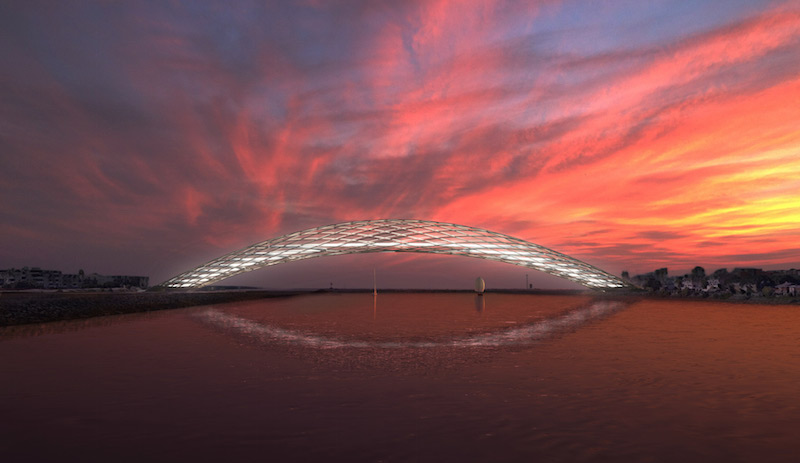 Abramson doesn’t have an estimate for how much such a project would cost, as this is all pretty preliminary. However, as Abramson told Curbed, “You have to start with some visionary thoughts to make something iconic happen.”

It wouldn’t be the first time L.A. took on a pedestrian-friendly bridge project. Consider the bridge that now connects the Metro Red Line Universal City station to Universal Studios. Instead of waiting to cross busy Lankershim, pedestrians can head straight from the station to the waiting area where the Universal tram picks up and drops off passengers. 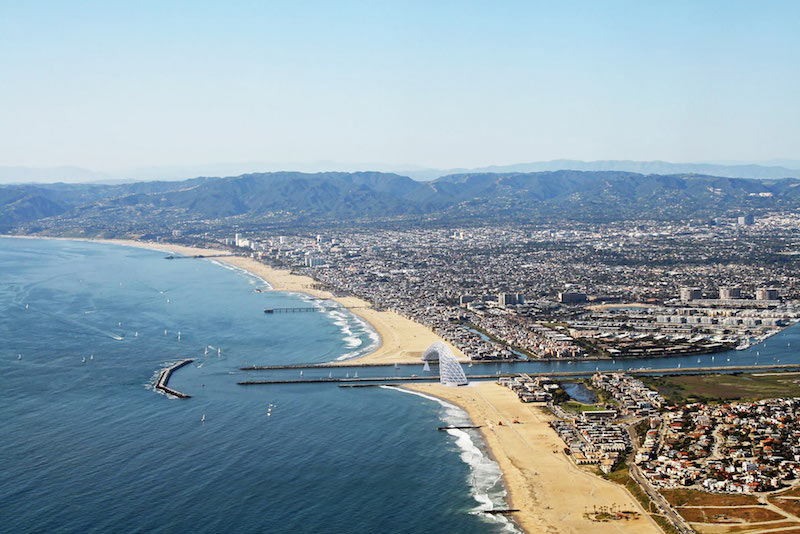 The bridge can be seen crossing the harbor in this rendering. Photo: Abramson Teiger Architects

It’s also not entirely uncommon for a visually appealing bridge to serve as a tourist attraction, such as the Sundial Bridge at Turtle Bay Exploration Park in Redding. This bridge not only allows pedestrian access across the Sacramento River, but functions as a giant sundial.

Check out a map of Los Angeles’ many other existing pedestrian bridges, tunnels, and crossings here.