The NFL Will Be Returning to Los Angeles in 2016

We mentioned a few days ago on this blog that the Raiders, Rams, and Chargers had all filed paperwork to request relocation to the city of Los Angeles.

What we didn’t know then, but do know now, is which of those three teams would be give the go-ahead by the league to make the move.

The decision is in, and two teams the NFL has approved for relocation are the Rams and Chargers, with a new stadium build out in Inglewood part of the ratified proposal. The vote was carried 30 – 2 in favor.

Interestingly, the twist here is that the approved move of both teams to L.A. also leaves the Chargers a sort of conditional out, meaning they are free to still pursue at stadium deal in San Diego for the time being. Details on this aspect are still forthcoming, and I’ll update as they become available.

As first reported here, Chargers have option to join Rams in Inglewood starting as early as this year and for few years after

UPDATE: According to Adam Schefter the approval gives the Chargers first crack at moving to join the Rams until the beginning of next year, at which time that preference would then go to the Raiders.

Rams to LA, with Chargers getting first crack through Jan 16, 2017, then Raiders have preference, per sources.

As Sam Farmer reported for the LA Times, it’s pretty rare for the NFL to devote a day of owner’s meetings for an individual topic, but with the potential financial future of the league at stake, it was well warranted.

Resolution came after a full day of meetings by NFL ownership in Houston, with multiple votes taking place for at least three different scenarios, including one (ultimately unratified) proposal that would have the Chargers and Raiders play at a new stadium to be built in Carson.

Ultimately, it was reported that the Raiders bowed out of the process, leaving it up to the Chargers to decide whether they wanted to partner up with the Rams in the potential deal.

The question for the #Chargers is whether they let that anger become the catalyst to tell the #Rams they aren't interested?

Even as word leaked out that the Rams were likely approved, tension continue to mount even as the final vote got underway.

In the end, whatever your feelings about the Rams and Chargers, it was hard not to feel a bit triumphant about the return of the NFL to the city of angels after a 21-year absence.

After a 21-year odyssey, it’s over . And beginning anew. The NFL is coming back to Los Angeles – Rams (YES) and Chargers (MAYBE)

The #Rams coming back home. Hard to believe. But this is really happening

I still remember sitting at the Rose Bowl in 1980 watching the Rams play in the Super Bowl. Went to my last game in 1994. #welcomehomerams

Still, today’s vote brings with it many lingering questions moving forward, one being which stadium the NFL team(s) moving to Los Angeles will use as temporary homes in the interim period before the new digs in Inglewood are completed. 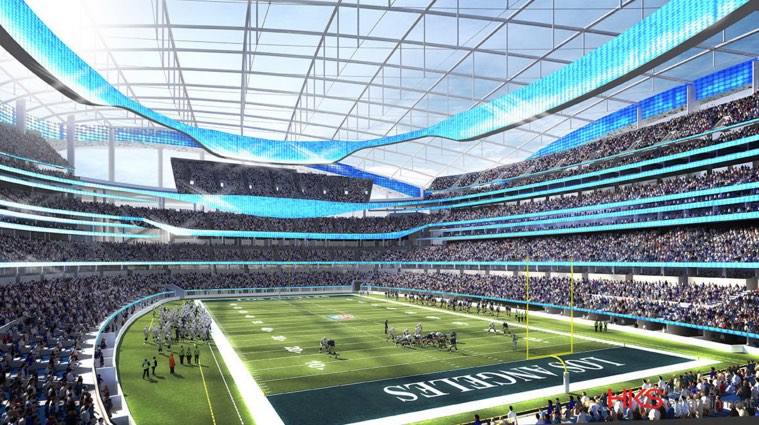 Artist rendering of a proposed new NFL Stadium in Inglewood. Via HKS

And in terms of civic issues, that may not even be the most pressing.

I was reading a spirited debate on the Los Angeles sub-reddit earlier today about the potential traffic implications of a stadium, and the traffic issue is on top of probably the most obvious topic of discussion: public financing concerns that will be the immediate gut reaction of many angelenos (and Inglewood residents).

Whether you’re pro NFL or anti NFL one thing is for pretty certain now: Pro football is returning to Los Angeles in 2016.

For additional reading on proceedings today and what the next steps are, I’d point you to Sam Farmer / Nathan Fenno writing for the LA Times as well as Kevin Acee writing for the San Diego Union Tribue.