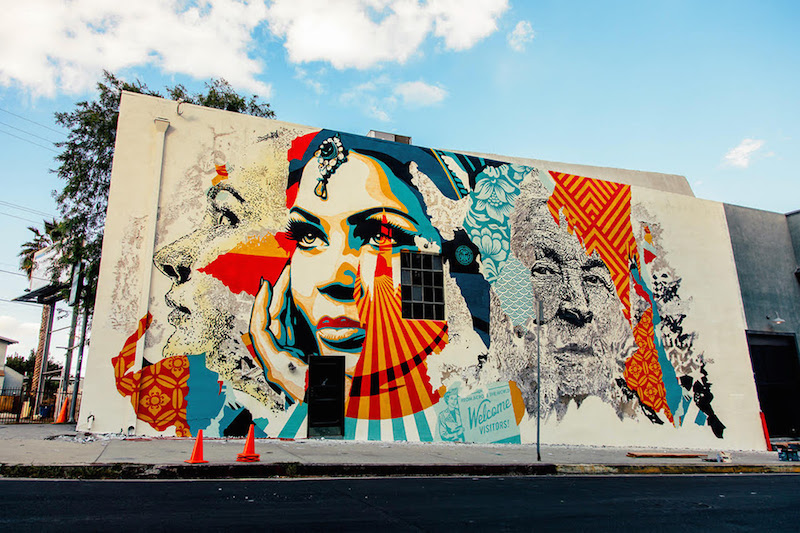 Shepard Fairey and Portuguese street artist Vhils (Alex Farto) have debuted a new mural at Mack Sennett Studios in Silver Lake. The 60-by-300-foot piece is titled “American Dreamers,” and is meant to reflect the challenges immigrants face in the United States.

If this mural seems vaguely familiar, it may be because the center woman’s face is from an earlier Fairey work, “Target Expectations.” The women that flank her are Vhils’ contributions. According to a statement via Obey Giant’s Facebook page:

My “Target Exceptions” image, in the center of the mural, addresses the challenges of both visiting and becoming a resident of the United States, for many people. As it turns out, there are various target criteria that make a person an ideal candidate to immigrate, but most people who might long to fulfill the “American Dream” are exceptions to the target qualifications, especially considering the attitudes and attempted policies of the current administration.

Resident status in the United States is hypothetically granted for four main reasons: family ties, employment, status as a refugee, and to promote diversity. In other words, it will most likely be family or business/employment connections that are the most viable route to a U.S. visa, considering that refugees and people who would expand diversity seem altogether unwelcome in the U.S. at the moment.

Vhils liked the style and sentiment of my image and added his own chiseled textures and portraits with women of different ages to symbolize the multi-generational nature of the struggles of immigrants.

This is the second time the pair have collaborated, having partnered on a 2017 mural in Lisbon. Similarly, this piece combined Fairey’s “Universal Personhood” with Vhils’ own work.

Veils was born and raised in Portugal and later studied in London. His work often features portraits first painted onto a wall, then chiseled to reveal a compelling depth. Vhils explained to Hypebeast, “Destruction is inherent in all forms of creation. Even if you’re writer, you have to destroy the white paper to pursue your craft.”

His solo show, Annihilation, opens tonight at the Over the Influence gallery in downtown L.A. There will be an opening reception from 6 to 8:30 p.m., while the work will remain up through April 1.