Check Out Cutting-Edge Virtual Art in Pasadena This October 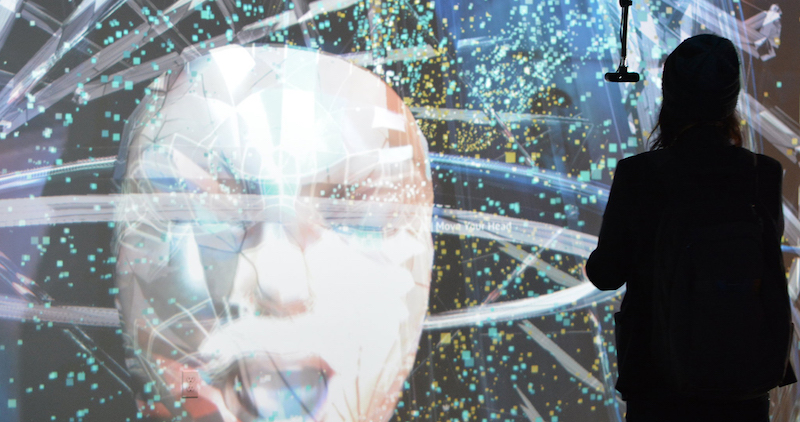 As virtual reality continues to blossom, artists are finding a new platform for expression. At Spatial Reality: Artists Explore the Future of XR, a new exhibit coming to sp[a]ce gallery at Ayzenberg in Pasadena, these artistic pioneers are on display for our futuristic viewing pleasures.
Advertisements

If we’re embarking on this exploration of XR together, it’s important to know what XR is. Exhibit curator and VR Scout Editor-at-Large Jesse Damiani explains via a release: XR is “a spectrum of ‘extended’ reality that includes virtual reality (VR), augmented reality (AR), and mixed reality (MR) [that] takes the virtual world to new dimensions.”

Okay, but what are those?

An example of AR is Pokemon Go. Assuming you’re not in battery-saver mode, you hold up your phone and see the real world through your camera. Then, the game plops a cute creature on the screen, and you use your phone to hopefully capture it in a Pokeball. AR, essentially, overlays virtual objects—like a Charmander—atop the real world. To access the AR exhibits in Spatial Reality, you can download an AR app on your phone, then hover your phone over the QR codes placed around the exhibit. Watch as 2-D images come to life before your eyes. (You can also do this at Trader Joe’s on any 19 Crimes wine bottle using the app Living Wine and impress all your friends.) 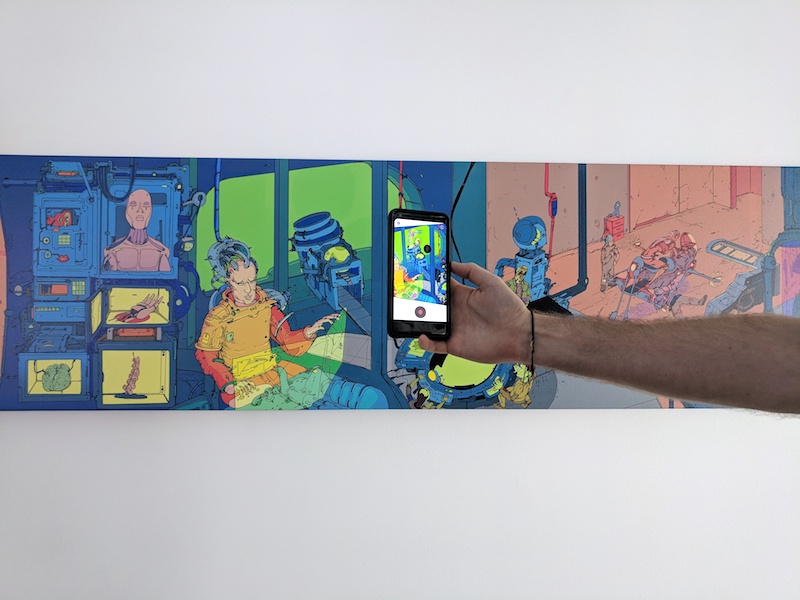 Sutu’s Machines of Progress is an Augmented Reality piece that changes when viewed through your phone. Photo: Juliet Bennett Rylah

Molmol Kuo’s Aliens of Extraordinary Ability is a bit different: guests can watch videos in which participants suddenly morph into alien beings, an effect captured on camera in real time.

Can Büyükberber’s Faces[On]Display uses projection mapping to detect the viewer’s face, which will appear on screen, surrounded by an abstract art image. That face morphs, becoming more and less realistic, as the viewer continues to observe. The artist also has 3D printed sculptures and a digital print in the exhibit. 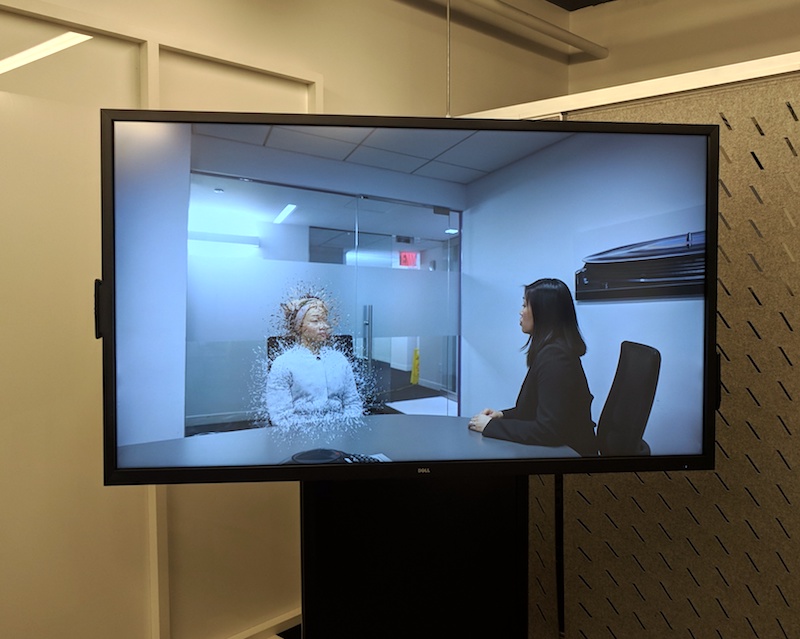 In VR, you’re completely immersed in a virtual world. Though the real world continues to exist around you, everything you see—and hear, assuming you’ve got headphones on—is virtual.

For instance, on one wall of the gallery hangs three canvas prints by Trudy Elmore, each depicting a snake writhing through the mouth and eye sockets of a human skull. Both are wrapped in a delicate print, pale pink roses on a mint green background. Sit down at the nearest VR headset, and you can watch these images morph and shift in VR.

Other VR offerings serve as meditative worlds, into which one can escape. Kevin Mack—who won a Best Visual Effects Oscar in 1999 for his work on What Dreams May Come—has created Blortasia, an “abstract art world” that guests can fly through using a simple controller. As the viewer floats through colorful twists and turns, they may encounter equally colorful amorphous blobs known as ‘Blorts.’

Pussykrew’s Amalgam is another psychedelic world, yet this one serves as a “hybrid universe where newly evolved post-gender organisms became the augmented hybrids of a body and technology.” Cruise through the world and interact with the virtual sculptures placed throughout.

Even more virtual pieces are on display in The Museum of Other Realities (MOR), which Damiani describes as akin to “a MOCA or a Broad, but for virtual art.” Guests use a controller to transport themselves around a VR museum, full of VR sculptures from a variety of artists. You might even find some of the exhibit’s other artists within MOR.

Elsewhere, Theo Triantafyllidis’ Staphyloculus is a strange piece that “attempts to recreate the first known outbreak of Polywobbly Ferventitis,” a fictitious computer virus that spreads through VR headsets. Footage taken in Joshua Tree depicts an artist setting up a VR rig while little pink entities multiply and overtake him. At times, the viewer stands in the role of that artist. A computer monitor inside the virtual landscape shows the viewer as a disembodied headset and controllers, increasingly swarmed by the pink blobs as time progresses. Things only get more surreal from there.

Mixed Reality falls somewhere in the middle between AR and VR. In MR, real and virtual objects coincide at once, often anchored to one another. This can mean a variety of different things. For instance, in The VOID, currently available at the Glendale Galleria, users will don a VR headset and headphones to access a virtual world. As they move through the experience, they will interact with objects that exist in both worlds. So when you’re a Stormtrooper blasting through an Imperial base, you hold a plastic gun that appears as an operational blaster in VR. When Virtual You you gets close to the planet Mustafar on your transport, you’ll feel the heat and smell the sulfur, both piped into the real world, but complimenting the virtual one. The VOID could be considered mixed reality, though they call their experiences “hyper reality.” (Read more about how you can experience The VOID in Glendale here.)

At Spatial Reality, you can try a very different MR experience from a.new reality called Moonbloom. The real-world space features wallpaper that looks like the night sky, a model of an igloo, a stuffed fox, and the outline of a crescent moon divided into three pieces. You’ll then don a headset known as Magic Leap, and what you see in the goggles will be laid overtop. 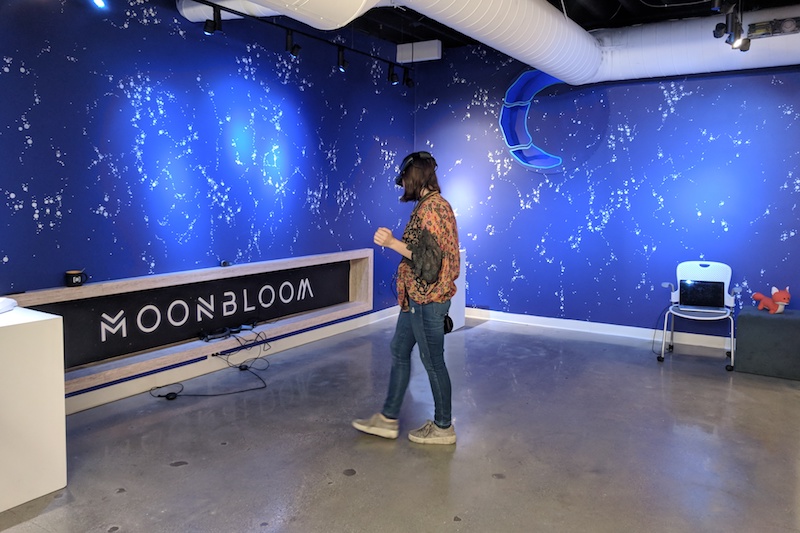 As the Moonbloom story goes, you’re a celestial being tasked with finding all the pieces of a fallen moon. Your partner in this endeavor is a fox. The virtual fox navigates the virtual world, which you can manipulate with your real hands—no controllers required. When the fox needs a tree trunk moved out of her way or a bridge built between two floating islands, you can make that happen for her. Once the two of you have located the moon piece, return it by matching it to the moon cut-out in the real world. Considering Magic Leap headsets are currently selling for over $2,000 a piece, this gallery is perhaps your best chance to check it out.

All told, Spatial Reality will feature work from over 25 artists in all three mediums. Damiani recommends treating the pieces in this exhibit not as games or movies, but the way you would any other work in an art museum.

“This isn’t something where you’re going to be wrong,” Damiani said. “Just feel it, be inside of it, turn off the part of your brain that’s saying ‘what’s the point?’, and just experience it.”

Spatial Reality kicks off on Friday, October 12 from 7 to 10 p.m. then continues on Saturdays and Sundays from October 13 to 28. Weekend time slots are available from noon to 6 p.m at sp[a]ce gallery at Ayzenberg, 39 E. Walnut Street, Pasadena. General admission tickets are free, while VIP tickets are $45. The latter provide guaranteed access for a 90-minute time slot reserved in advance. They also guarantee front-of-line access to individual experiences. The exhibit has been sponsored by RYOT with support from Meow Wolf, VR Scout, Raptor House Effects, and Magic Gallery. Find more info and tickets here.