what are some new flavors you'd like to see at frostbites? give us your suggestions in the comments below! #frostbites #italianice #sorbetcream #passionfruit #mango #blueraspberry #margarita #pineapple #orangecream

A photo posted by frostbites frozen delights (@frostbitesfrozendelights) on Feb 27, 2016 at 3:41pm PST

Come dine and discuss with fellow hobbits, wizards, dwarves, elves, and the occasional men at a feast that celebrate the world of Middle Earth during Whimsic Alley’s Hobbit Dinner happening August 27. Tickets are $70 and include dinner, open bar, and live entertainment. Reserve your ticket over the phone or in the store.

Get a taste of the funky, tart, and sour during the San Gabriel Valley Sour Beer Festival happening at 38 Degrees Ale House & Grill in Monrovia on August 27. No cover charge so treat yourself!

In case you missed it, earlier this week Nerdist reported that a Star Wars-inspired cantina will be popping up in Hollywood sometime in the winter.

Brews and bacon are two of life’s greatest pleasures and they’re only made better when combined at the San Pedro Beer and Bacon Festival taking place on the USS Iowa Battleship this Saturday August 27. Huge bonus we just found half off tickets check it out.

In honor of the upcoming “The Taste” event on Labor Day weekend LA Times Test Kitchen Director Noelle Carter will host a “Taste Bingo” game night this Thursday from 6 – 10 p.m. at Grand Central Market with $5 dishes from a selection of vendors. Admission is free.

Ain't no party like an @latimesevents party. Stop by @grandcentralmarketla next Thursday (8/25) for a special edition of Game Night. Hint…it will include raffle prizes! Full details on our Facebook page . . . #gamenight #loteria #losangeles #grandcentralmarket #tastela #latimes #raffle

Starting August 26 all locations of Sweet Rose Creamery will let you customize your own ice cream sandwich for $6. Combine any flavor from the menu with housemade vanilla or muscovado sugar waffle cone wafers. Guests will also have the option to have their creations dipped in Guittard dark chocolate.

The classic French Baguette recipe could take a lifetime to master. You don’t have time for that, so we’ve done the hard work for you. Enjoy this lean, delicious bread with a it’s crispy crust this #4thofjuly weekend! #larderbakingco

New Happy Hours around town to add to your list….

New Arts District spot Westbound offers a late night happy hour Tuesday – Thursday from midnight to 2 a.m. for $10 nightcaps featuring a handful of classic cocktails including Gold Rush, Paloma and Blue Lagoon. A selection of midnight snacks are also available that range from $7 Chips & Dip, $9 Fried Pork Rillette to $15 Beef Tartare. Night owls who stay till 1 a.m. will be treated to complimentary fresh baked brownies topped with a toasted meringue.

Herringbone’s new lunchtime happy hour includes shareable plates of Albacore Sashimi, Grilled Pork Bely, and Truffle Fries – all under $11. Complimentary valet is also available for those who take advantage of the midday special.

The Bellwether’s new Monday-Friday 5  to 6 p.m. happy hour menu features some of Ted Hopson’s most delicous dishes including the Tempura Cauliflower and Nashville Hot Chicken Sando for just $5. Everything on tap, eight wines and Ann-Marie’s Bellwether Manhattan and Blood & Sand Redux is also $5. 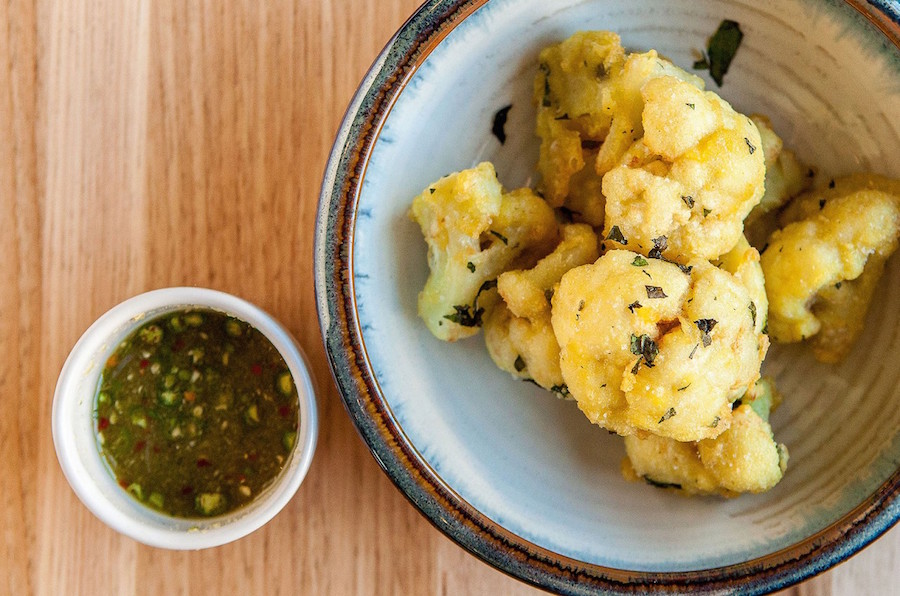 The Los Angeles Food & Wine festival takes over Los Angeles this week from August 25 to 28 featuring some of L.A.’s most acclaimed chefs and restaurants for a four-day event of culinary delights. Some tickets are still available for select events such as the power lunch series, highlights include a four-course meal of Southeast Asian inspired dishes by chef Shawn Pham of Simbal and Jessica Largey of the soon to open Simone and Chef Greg Bernhardt with Chef Hugh Acheson at Paley for a eight dish tasting.

As for tasting events the Night Market hosted by Jet Tila and Brian Malarkey is a good pick with the main attraction being the Grand Tastings on Saturday and Sunday if you want samples overload.