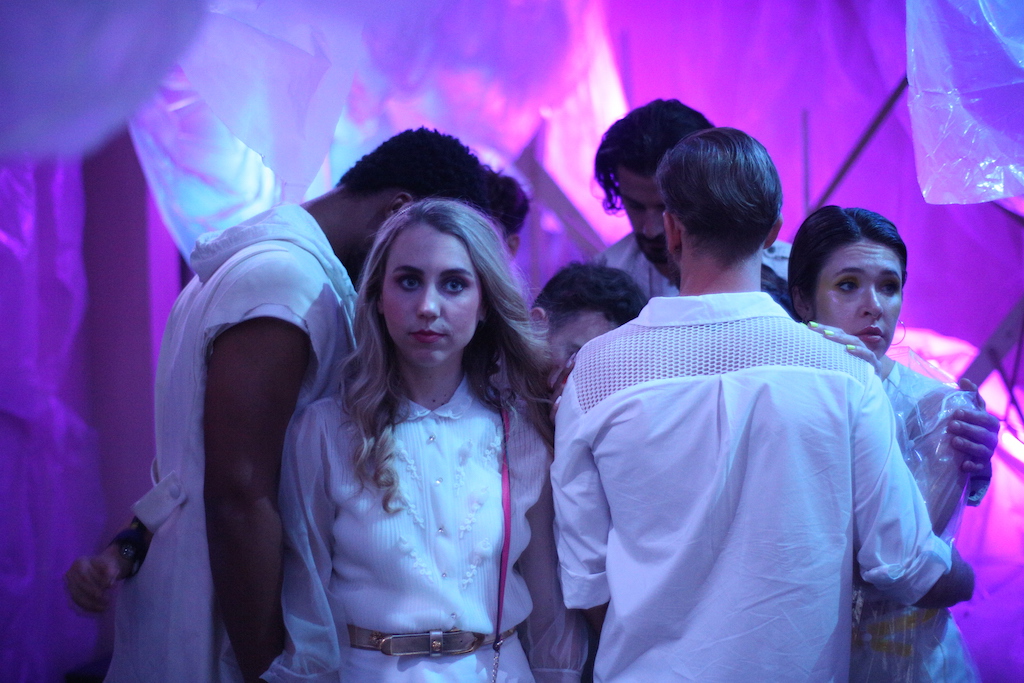 Jordana Lilly and ensemble in ‘They Who Saw the Deep’ Photo: Ceaseless Fun

In a secret 17,000-square-foot space in Koreatown, a group of strangers clothed in white ponder their place in life, death, and whatever comes after. The audience roams freely, cast members become the central figures of their own epic, and things get a little weird. It’s all part of a new immersive experience called They Who Saw the Deep.

They Who Saw the Deep comes via Derek Spencer and Meredith Treinen’s production group Ceaseless Fun and combines elements of several mediums, including immersive theater, dance, music and performance art.

Guests are led into the massive venue in small groups. The scale and awkward layout make the location ideal for something like this, where discovering how rooms connect to one another is part of the excitement. In some spaces, you can stare through an interior window into a distant room, but it’s not immediately clear how to access it. It’s sort of like being lost in a dream, and the otherworldly milieu is enhanced by the set design. Some rooms are minimal, with just plastic sheeting and blue lighting creating the feel of a cold, subterranean purgatory. Others are cluttered with ephemera, some of it seemingly from the building’s past life and other items selected to represent the various characters. 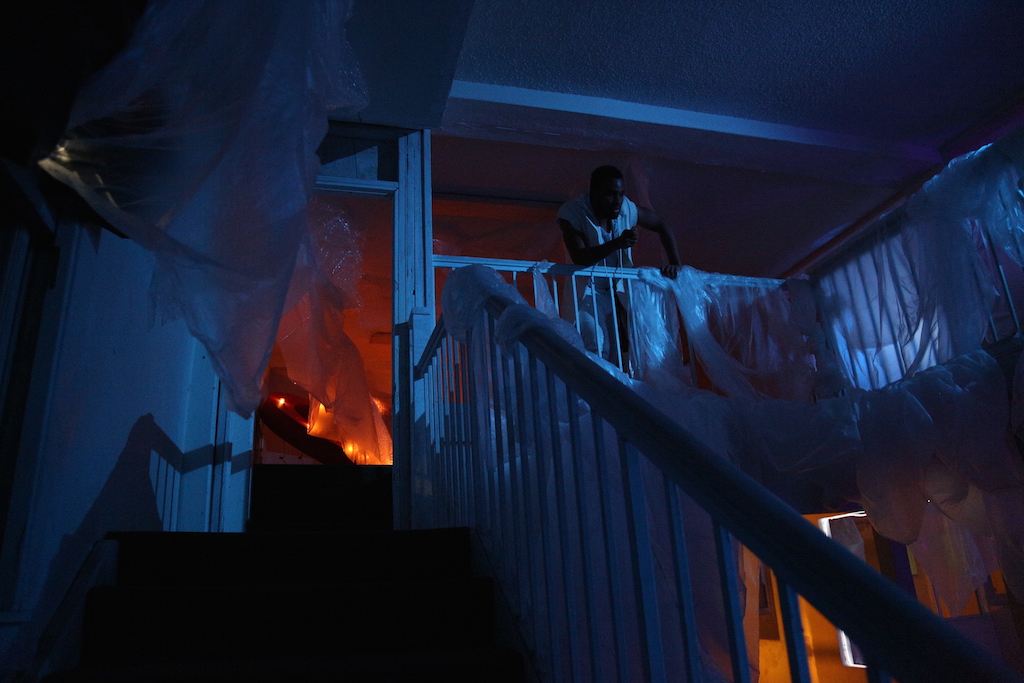 Actor Mike Merchant in ‘They Who Saw the Deep’ Photo: Ceaseless Fun

Unlike a traditional play and even some other immersive shows, there is very little guidance. Though guests interact with several characters, some of whom may take guests by the hand and lead them into smaller scenes, audience members are mostly left to their own devices.

If you are one of the first audience members let in, you might run out of things to explore on the building’s ground floor. Eventually, however, new spaces emerge allowing you to delve further. This makes They Who Saw the Deep one of the most open pieces of immersive theater to emerge in L.A. in recent memory.

This also results in a lack of a clear narrative, with characters telling pieces of stories at odd intervals.

One woman in a plastic coat (Juliet Deem) talks of her self-serving volunteer trips abroad and cocaine benders. An eccentric gentleman (Matthew Maguire) luridly recalls the first time, as a child, he saw his mother nude. Another man (Mike Merchant) rails against capitalism, while wrestling with his own demons and sense of purpose. Sometimes the characters literally wrestle each other in a tightly choreographed scene that unfolds regardless of who is watching. No one is fighting a fantastical beast, but they’re all fighting something. 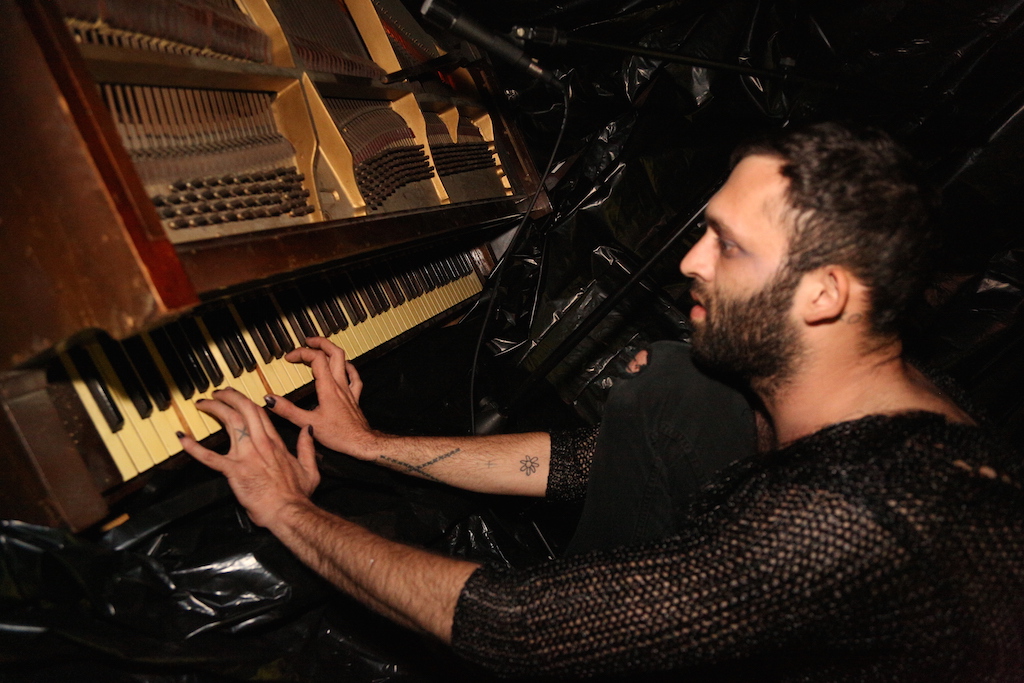 Dakota Loesch creates music and a soundscape for ‘They Who Saw the Deep’ Photo: Ceaseless Fun

One of the most remarkable things about the show is how it sounds. In a room wrapped in black plastic, musician Dakota Loesch creates a desolate, ambient soundscape that occasionally evolves into full, lush songs sung by various characters. What ties the whole odd spectacle together is that it’s meant to be a loose interpretation of the Epic of Gilgamesh.

Epic of Gilgamesh is an epic poem written in Sumerian on clay tablets, dating back to 2100 B.C. It follows the eponymous Gilgamesh, king of the ancient Mesopotamian city of Uruk as well as the strongest man in the world. He was a real jerk and, after his people complained to the gods, the gods created an evenly matched foe for him named Enkidu. Enkidu lived in the wild among the animals until he experienced the love of a woman. Compassionate and kind in his newfound civility, he naturally squared off with local bully Gilgamesh in an intense wrestling match. Though Gilgamesh ultimately bested Enkidu, the two respected each other’s strength and became close friends. Gilgamesh was changed by Enkidu for the better. Years later, the two pals went off on a beast-fighting quest that ended with Enkidu being cursed by the gods and dying of a mysterious illness. Gilgamesh then went on a solo quest seeking immortality, unwilling to end up like his felled BFF. Though Gilgamesh would ultimately fail at achieving immortality, he learned he would live on in legend, which is its own kind of immortality. 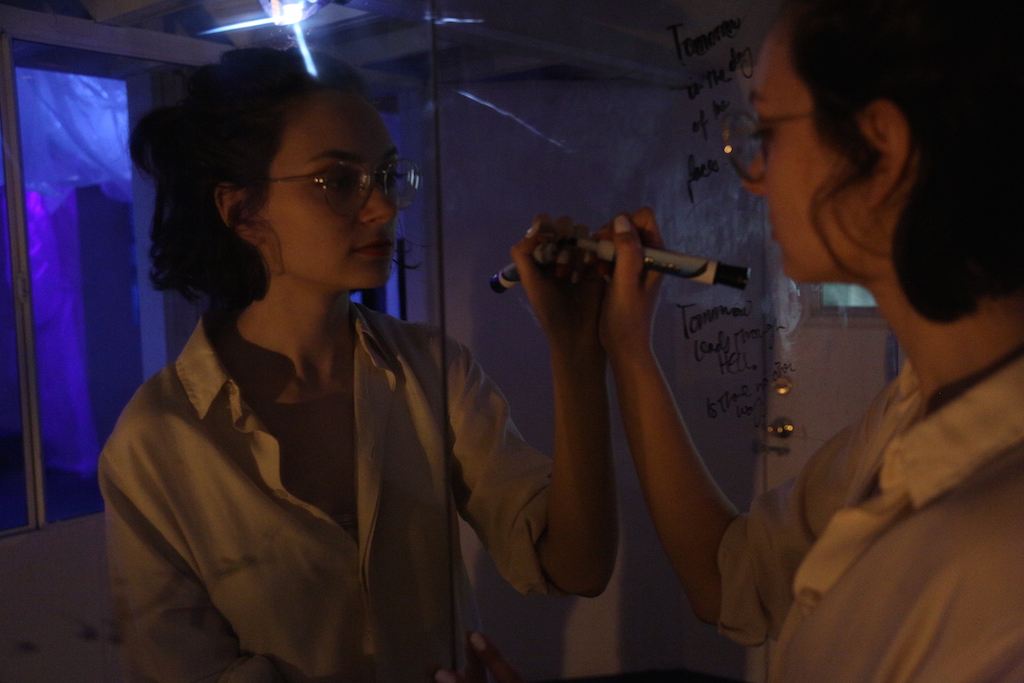 Jinny Ryann in ‘They Who Saw the Deep’ Photo: Ceaseless Fun

The opening text of the poem translates to “he who saw the deep,” which is believed to mean that Gilgamesh came to know everything. In They Who Saw the Deep, each character is meant to be their own Gilgamesh, seeking answers their own answers to life’s mysteries.

The version of Gilgamesh we read today has been assembled, retold, deconstructed and processed through multiple languages, over thousands of years, by many poets, and in various historical contexts. TWSTD leans into the pluralistic and fractal features of the epic. It processes an already processed text again, pluralizing the protagonist and asking the audience to consider multiple perspectives and multiple answers to the questions we all ask ourselves.

They Who Saw the Deep runs Thursday to Sunday through May 20. Tickets are $40, and are available here. This production is the second part of a three-part season, The Outline of a Human, that “aims to define and describe the human condition through the use of negative space.” (The first, Agnosia ran in January, while the third, Stars, debuts at Hollywood Fringe.)