This week, from Monday, July 31 to Friday, August 4, features a sunset walk at Griffith Observatory, the Silver Lake Picture Show, the Brew at the Zoo, FIGat7th Downtown Festival, First Fridays and LOTS more. 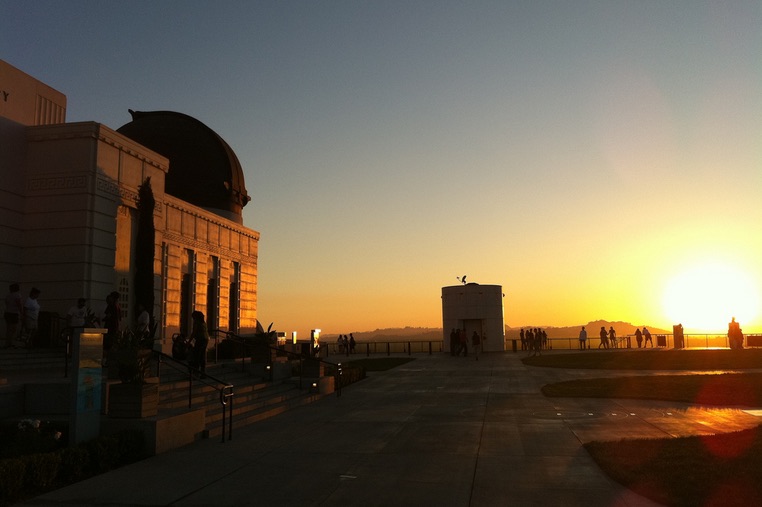 2. Beer Society at Arts District Brewing Company will feature Third Window Brewing. Guests will have a chance to taste three marks while learning about the process of beer making.

3. The guys behind Delicious Vinyl (Mile and Rick Ross) has turned their pizza joint on West Adams Delicious Pizza into a cultural hub with a roster of events worth driving to. This Monday enjoy jazz in “The Yard,” with Keelan Walters in the restaurant’s lively outdoor garden area while taking a bite out of their naturally fermented dough pizzas, cinnamon roll bread pudding and refreshing sangria. FREE

4. The Business LA is a free comedy show at Little Joy featuring some of the best local comics in town. This time it’s a “cool girls” edition with Maria Bamford, Casey Jane Ellison, Nina Tarr and more. FREE

5. The team from Smoke and Mirrors aims to add a little razzle-dazzle to your Monday monotony by showcasing a rotating cast of award-winning magicians at The Santa Monica Playhouse. Check for discounted tickets before making your purchase. DISCOUNTED (via Goldstar)

6. The Moonlight Movies on the Beach series continues with a screening of 50 First Dates at Granada Beach this Tuesday. FREE

7. Hollywood and Highland will be taken over by Summer Jazz Nights every Tuesday till August 8th. While the show is free, you can secure guaranteed seating, wine, beer and a selection of cheese for a donation of just $14. It’s all for a good cause as 100% of the proceeds go to Project Angel Food. This week Josh Johnson will perform.

8. The folks at Rooftop Cinema Club are back with a screening of Fantastic Beast and Where to Find Them at LEVEL in Downtown Los Angeles.

9. Shake it Off dance film series happening at the Hammer is a free event highlighting classic dance films every week and this week they kick off the series with Saturday Night Fever. FREE

10. Spend an evening poolside and beneath the stars enjoying dinner, cocktails and a classic film as Mr. C’s Poolside Cinema returns with a screening of Ferris Bueller’s Day Off.

12. Griffith Observatory offers a Sunset Walk & Talk one evening a month. At this event, learn about the park as you enjoy a sunset hike led by a Griffith Park park ranger and a museum guide. FREE

13. Sound Off Silent Disco is going down at the Sherman Oaks Galleria where partygoers will wear wireless-headphones and get immersed into a one of kind dance party featuring two live DJs. FREE

14. Shakespeare By The Sea returns with free performances for the summer. This Wednesday they’ll be performing Macbeth at CSU Dominguez Hills in Carons . While admission is free encourage donations to help support the play. FREE

16. Enjoy some free Shakespeare this summer when the Independent Shakespeare Co. returns for the 8th year in a row with free/donation-based performances at the Old Zoo in Griffith Park.The Two Gentlemen of Verona Wednesday through Sunday.

19. The Silver Lake Picture Show returns with free outdoor movie screenings in the heart of Silver Lake at Sunset Triangle Plaza. This week: District 9 will be screened . FREE

20. Rockwell Table & Stage presents The Unauthorized Musical Parody of Bridesmaids a hilarious musical parody of one of the best chick flicks ever to hit the big screen. DISCOUNTED (via Goldstar)

21. The folks at Rooftop Cinema Club are back with a screening of Raiders Of The Lost Ark at LEVEL in Downtown Los Angeles and L.A. Confidential at The Montalban in Hollywood.

23. The Moonlight Movies on the Beach series continues with a screening of Jaws at Cherry Beach this Thursday. FREE

26. Shakespeare By The Sea returns with free performances for the summer. This Thursday they’ll be performing The Taming of the Shrew at Warner Center Park in Woodland Hills. While admission is free encourage donations to help support the play. FREE

27. The 2017 season of the Skirball’s free Sunset Concert Series, inspired by the Skirball’s current high-profile exhibition Paul Simon: Words & Music, is a showcase for up-and-coming talents and established artists from Los Angeles and around the globe. The series continues with Ibibio Sound Machine FREE

28. Shakespeare’s enchanting A Midsummer Night’s Dream returns to Topanga Canyon’s Theatricum Botanicum for ten performances throughout the summer with their signature production in a uniquely rustic outdoor theater surrounded by oak trees.

31. Brew at the Zoo comes to the Los Angeles Zoo & Botanical Gardens this Friday for an evening of beer tasting from local craft and microbreweries. Sip suds while you enjoy live music, pop-up zoo keeper talks, and close-up animal encounters. Check for discount tickets before making your purchase. DISCOUNTED (via Goldstar)

32. Garbage Pail Groundlings is the latest main stage show at the renowned LA theater. The show is filled with sketch comedy, improv and a cast of growing comedians who’ve made appearances in movies like Ted and television shoes like Workaholics. DISCOUNTED (via Goldstar)

33. Join Indiana Jones at the Hollywood Bowl  when Raiders of the Lost Ark gets played in HD on the Bowl’s jumbo screens, accompanied by the Los Angeles Philharmonic, performing John Williams’ iconic film score. Happening August 4 and Saturday, August 5.

34. The folks at Rooftop Cinema Club are back with a screening of Moonlight at LEVEL in Downtown Los Angeles and Fantastic Beast and Where to Find Them at The Montalban in Hollywood.

36. There’s a Lion King Sing-Along happening this weekend at the El Capitan Theatre. Bonus: Timon the beloved Meerkat is set to make a special appearance before each show. Taking place all weekend. DISCOUNTED (via Goldstar)

37. City of Monterey Park presents Summer Movie Nights a movie series taking place at five different parks in Monterey Park during the summer. This week they will screen Finding Dory in a truly special space at the Barnes Park pool! Bring your bathing suit and make it a swim night. FREE

38. Shakespeare By The Sea returns with free performances for the summer. This Friday they’ll be performing Macbeth at Garfield Park in South Pasaden. While admission is free encourage donations to help support the play. FREE

40. Take a Downtown Los Angeles foodie walking tour and savor what the bustling neighborhood has to offer. The tour is three hours long, participants will stop at six popular spots to eat and the tour guide will take folks through the history of DTLA. Happening Friday and Saturday. DISCOUNTED (via Goldstar)

41. Since its the first Friday of the month check out all the cool events happening around town including block parties and art walks for First Fridays.

42. The Griffith Observatory hosts a monthly forum where some of the most amazing phenomena in the known universe are explained and discussed. It’s called All Space Considered and it takes place on the first Friday of every month. FREE

45. Catch a flick on the rooftop of the Ritz-Carlton in Downtown Los Angeles during Summer Supper + Show Series presented by WP24 by Wolfgang Puck. The series continues with a screening of Pitch Perfect on August 4 and 5.