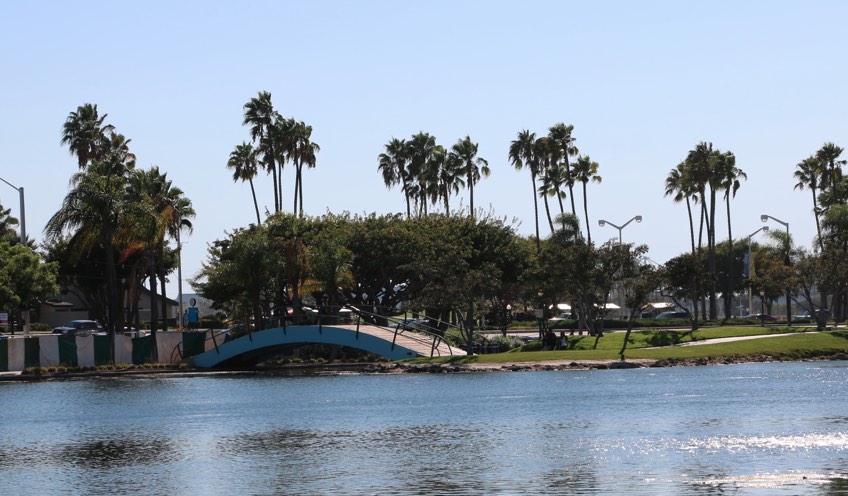 Annie Sertich (Curb Your Enthusiasm, 2 Broke Girls, The Tonight Show and The Office) performs her darkly comic one-woman memoir at the Groundlings Theater on Melrose. Tickets are just $6 if you buy at the discounted rate on Goldstar.

This week’s installment of Doug Benson’s Movie Interruption Doug and a couple of his funny friends will watch Entourage from the front row with mics in hand ready to blurt out whatever thoughts they have in their heads.

David Hockney’s work is being shown jointly by L.A. Louver and London’s Annely Juda Fine Art together they present “David Hockney: Painting and Photography,” an exhibition of brand-new works all made in the last two years by the prolific artist.

The popular screening series that has already held court in London and New York made its L.A. debut last week. For each screening of the Rooftop Film Club series organizers will set up rows of lawn chairs on the roof of the Ricardo Montalbán Theatre and provide headphones for each attendee. Doors open at 6:00pm with screenings starting at 8:00pm. Kicking off the second week of screenings is Casablanca on Tuesday, The Breakfast Club on Wednesday and Cinema Paradiso on Thursday.

9. Free Family of the Year show at Amoeba

Family of the Year will celebrate their new self-titled album on Nettwerk Records with a FREE live acoustic set and signing at Amoeba Music in Hollywood beginning at 6:00pm

The battle for the best Latin street food is about to crown the ultimate winner. The finale “Battle of the Nations” will take place at Border Grill. For $25 guest can partake in an all you can eat feast or $5 a la carte.. Guest then cast their vote on Twitter or Instagram and a winner will be announced. Country-specific cocktails will also be available for $7.

LACMA will screen the film adaptation of the H.G.Wells story told on radio of the invasion of Earth by Martians. This ongoing Tuesday Matinee film series cost $2 for members and $4 for non members.

Every Tuesday, movie tickets at Regal Cinemas L.A. LIVE are $8 all day long. Come to Regal L.A. LIVE to watch the latest blockbusters in their state-of-the-art auditoriums.

Hollywood’s legendary El Capitan Theatre presents a special engagement of Disney’s “Frozen” Sing-along version from August 20 through September 16. Each screening will be accompanied by Elsa, live on stage, snow inside the theatre, and after the movie, Olaf live on stage and a screening of Disney’s “Frozen Fever.” This Thursday is the opening night so expect special presentations to be happening throughout. Discount tickets are available while they last via Goldstar.

This Thursday Laemmle’s NoHo 7 continues their throwback movie series with a screening of Mean Girls starting at 7:30pm. Get more information and discount tickets (while supplies last) via our friends at Goldstar.

An L.A. summer tradition the Twilight Summer Concert Series takes place right on the Santa Monica pier. This week Rebirth Brass Band with Miles Mosely & The West Coast Get Down will take the stage. Don’t forget to RSVP for this free event. Just an FYI, KCRW has free events all over the city this summer so take full advantage!

All summer long every Thursday night from 6:00pm to 11:00pm in the Playhouse District of Old Town Pasadena, join a crowd of locals gathering for live music and food trucks. This week brings Crepe n Around and Slammin Sliders truck to Old Town. Get more info on the official Facebook page for the event.

From September 4-6, LA Times: The Taste returns to offer Angelenos a food and drink experience unlike any other. Highlights include an opening night party on Friday, a field-to-fork midday celebration on Saturday, a Sunday brunch+bbq event, and an ethnic food ‘tour’ of some of L.A.’s finest dining spots hosted by Jonathan Gold on Sunday.

The 21st Annual E Hula Mau Festival returns to the Long Beach Performing Arts Center’s Terrace Theater this Friday through Sunday in a cultural celebration of all things Hawaiian from music, authentic cuisine to arts and crafts. Get more information and discount tickets (while supplies last) via Goldstar.

The 626 Night Market lays claim to being the largest Asian-themed night market in the United States with over 200 food and craft vendors participating in each event on average every year, and this weekend (September 4-6) will be the final weekend of the summer for the market at Santa Anita Park in Arcadia. Admission is $5. Parking is $7.

In celebration of the band FIDLAR and their album release they will participate in a Tumblr IRL taking place at The Well in Downtown Los Angeles this Friday at 7:00pm. The free all-ages event will feature visual art by the band’s longtime collaborator Ryan Baxley as well as Zoe Zag, who illustrated the band’s album artwork, and Alice Baxley. There will also be video projections, screen-printing, various on-site activations, and a very special surprise sure to please hometown FIDLAR fans. The event is open to the public with an RSVP!

Few events combine live music, art, agricultural attractions, farm exhibits, and more fried food than your arteries can handle, but it’s all part of the LA County Fair, starting this Friday, September 4 and running until September 27.

29. Contemplative Art Viewing At The Hammer

Enjoy a one-hour lead tour and experience art works in the museum’s permanent collection. The session takes place in the Grunwald Center for the Graphic Arts and is designed to deepen guests exploration on art. This session is free to the public!

Experience the Canyon after the sun goes down! Take in the breathtaking views of the San Fernando Valley as the moon rises over trees, listen for owls, and take in the beauty of the canyon trails after sunset. Hikers have a choice of three energy levels: short/youth, medium hike or a long hike. They run 45 to 60 minute long. Howling at the moon is strongly encouraged! The hikes are free for TreePeople members and up to three guests. Nonmembers pay $5 per hiker.