This week includes a dumpling and beer festival, Dark Harbor at the Queen Mary, the LA Haunted Hayride, the LA Korean Festival, Halloween Horror Nights, and plenty more events to choose from. 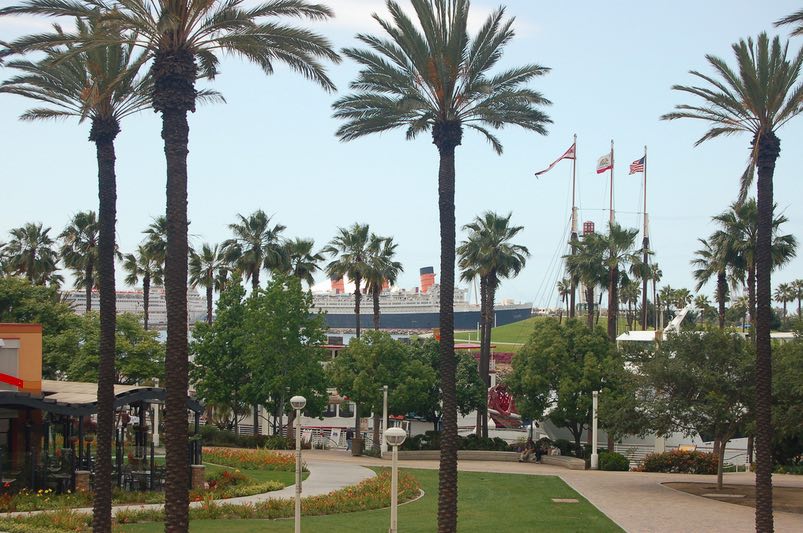 View of the Queen Mary through the palms. Credit: Rob Young via flickr

Ever thought about brewing your own distinct favor of beer? Will here’s your chance! Angel City Brewery is asking What Would You Brew? Simply submit your answer here, the more out there the better! One lucky winner will brew their beer with the Angel City brewing team. In addition, they’ll receive a custom kegerator, case of pint glasses, tap handle and a tin tacker sign. The beer will also be featured during LA Beer Week 2016!

2. Hot Tub With Kurt and Kristen

5. The Ancient Forest At Descanso Gardens

The popular screening series that has already held court in London and New York is now here in Los Angeles! For each screening of the Rooftop Film Club series organizers will set up rows of lawn chairs on the roof of the Ricardo Montalbán Theatre and provide headphones for each attendee. Doors open at 6:00pm with screenings starting at 8:00pm. Kicking off the week of screenings is The Notebook on Tuesday, The Grand Budapest Hotel on Wednesday, American Beauty on Thursday and The Shawshank Redemption on Friday.

Every last Tuesday of the month, the very hilarious Ian Karmel (Chelsea Lately) and Andrew Michaan host a free stand-up show at play, on 1018 S Santa Fe Ave. in DTLA. For information on the guest line up visit the Good Looks tumblr page.

LACMA will screen the sci fi cult classic Invasion of the Body Snatchers . This ongoing  Tuesday Matinee film series cost $2 for members and $4 for non members.

Peaches will celebrate her new album, Rub with an in-store performance at Amoeba Music in Hollywood at 5:00pm. She will also be signing limited copies of her album.

Latin-inspired restaurant Bow & Truss  throwback movie night series is back. This week Dumb & Dumber will screen on the patio of the NOHO restaurant. Admission is $15 for a reserved spot and comes with a movie-themed cocktail and dessert!

14. Aladdin on the Big Screen

Never seen “A Whole New World” sung on the big screen? Come to the El Capitan Theater this Friday as the Disney classic returns to the big screen! Get more information and discount tickets (while available) via our friends at Goldstar.

“Mick Rock: Shooting for Stardust, the Rise of David Bowie & Co.” will be glam-rocking it up for one month as Taschen Gallery’s latest exhibit. Showcasing prolific music photographer Mick Rock’s extremely rare photographs of David Bowie and friends during his “Ziggy Years.”

Experience Oktoberfest San Gabriel Valley style! The first ever Dumpling & Beer Festival will fuse craft beers and everyone’s favorite dish- the dumpling into one unique Oktoberfest with a local twist. Free to enter, and $20 gets you an unlimited beer sampling (price good till September 30).

Throw back Thursdays at Laemmle’s in NOHO will be screening 80’s musical flick Rock ‘n’ Roll High School. A gourmet food truck will be on-site with edibles tied to that night’s film. Guest are encouraged to bring their purchased food into the auditorium before the screening and enjoy a playlist of specifically curated music to match that night’s film. Grab some discounted tickets while they last via Goldstar.

Buy local and taste seasonal produce in the hip artist district of Downtown. From 4:00pm-9:00pm Angel City Brewery hosts a farmers market just outside of their triangle lot. Thursday is also “Mystery Cask” night so cheers to that too!

The Walt Disney Concert Hall is bringing classical music to you! Board the VAN Beethoven mobile experience, touring Los Angeles and making an appearance at the Korean Festival Thursday and Friday evening. Put on the Oculus virtual reality headset and be transported to a 360° 3-D performance featuring the opening of Beethoven’s timeless Fifth Symphony performed by the LA Phil, and conducted by Music and Artistic Director Gustavo Dudamel. VAN Beethoven, is a virtual reality project touring around LA in September through October in different locations of the city.

Every Thursday night from 6:00pm to 11:00pm in the Playhouse District of Old Town Pasadena, join a crowd of locals gathering for live music and food trucks. This week brings the Sun of a Bun and Lobos truck to Old Town. Get more info on the official Facebook page for the event.

The Completely Different Late Show is a hilarious improv show by the cast of the Groundlings’ Main Company. Audience shout suggestions throughout the night for improvisational scenes performed by some of the best in the business. It’s also a testing ground for brand new material for the Groundlings’ main show. Get more information and discount tickets via Goldstar (prices starting at $6.50)

If the idea of hopping on a bandwagon that travels through the darkness of Griffith Park while costumed characters seep out of the shadows to try to terrify you sounds like the time of your life… then step right up to the L.A. Haunted Hayride! The hayride will run from October 2-31 (every Friday-Sunday, plus some Thursdays and Wednesdays), and our friends at Goldstar have some special dealsto save you about $5 on select dates.

On this special day photographers of all different skill levels will have access to thoroughbred workouts so they can snap their best shots up close. Grab a special voucher from Goldstar that includes a hot breakfast served at Clocker’s Corner, during which top trainers and jockeys will regale you with stories of life at the track.