This weekend includes a huge LEGOs convention, a no-pants Metro ride, All Space Considered at the Observatory, a burgers and brewfest, FREE frozen yogurt, and plenty more options to choose from. 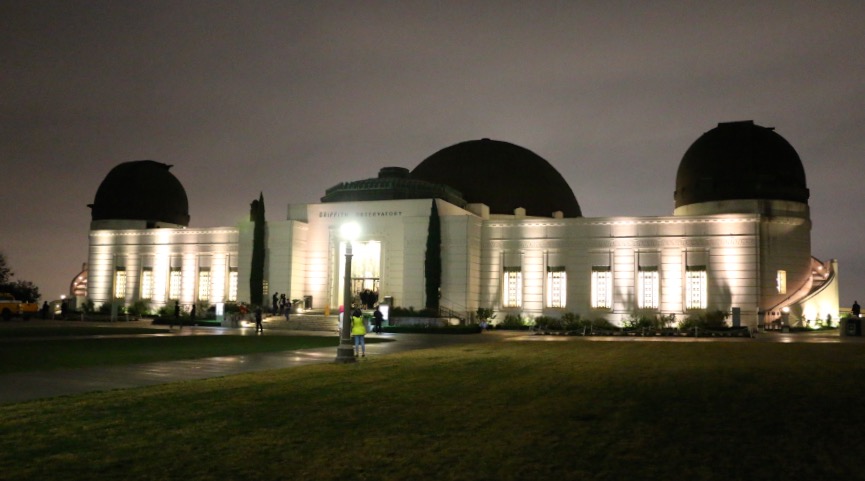 The Griffith Observatory hosts a monthly forum where some of the most amazing phenomena in the known universe are explained and discussed. It’s called All Space Considered and it takes place on the first Friday of every month (this month the event takes place on the second Friday of the month due to New Year’s).

Step into the world of Cirque du Soleil’s KURIOS a place of wonders where your imagination can alter reality. Interested? Get more information and discount tickets via Goldstar!

This smash hit straight from London’s West End, makes’s it’s U.S. debut at The Broad Stage in Santa Monica. See George Orwell’s novel come to life through radical staging that blurs the line between the past and present and what’s fiction and reality. Keep in mind our friends at Goldstar have some discount ticketing options for this performance throughout the month of January (while supplies last).

Elvis Presley’s birthday is this Friday and the folks at Salt & Straw will be offering a decadent twist on The Kings well-known favorite treat with chunks of homemade bacon-peanut butter Oreos swirled into a malted banana pudding ice cream appropriately named “Happy Birthday Elvis.” An impersonator will be at the Larchmont shop that night from 8:00pm – 9:00pm too!

The Skirball presents Manzanar: The Wartime Photographs of Ansel Adams in association with the Japanese American National Museum on view now through February 21, 2016.

9. Free Museum Day At The Long Beach Museum Of Art

We spotted an awesome deal over at Otus Thai Kitchen on La Brea. As seen on their Instagram, they are trying out a new morning coffee happy hour that will run weekdays from 6:30am – 9:00am. Grab a coffee for just a buck and espresso drinks are half off during this time.

13. CHILL at the Queen Mary

A massive Lego convention comes to the Pasadena Convention Center this Saturday and Sunday. Admission is $5 and gains access to dozens of Lego vendors, artists, displays, interactive demos, and more. Oh, and kids 5 and under are free!

For all our fellow froyo enthusiasts out there you can head over to Pico Rivera this Saturday for freebies to mark a week-long grand opening celebration for the grand opening of the new Menchie’s franchise on Whittier Blvd. Starts at 11:00am.

Motörhead’s Lemmy Kilmister passed away recently, and one of his favorite LA haunts the Rainbow Bar & Grill on the Sunset Strip will be holding their own remembrance services from 2:00pm to last call this Saturday.

Check out reptiles, amphibians and turtles at this weekend long expo at the Fairplex in Pomona. Open to all ages this is a great place to find supplies for the reptile in your life and brush up on some skills with educational workshops. Admission is $14 for adults and $9 for children 12 and under (the website has a printable coupon good for $1 off admission.)

23. Improv Comedy for Kids by Teens

Like improv? We bet your kids might like it too! Now in it’s 11th award winning year Comedy for Kids, by Teens stars LA Connection class members. These teens have been trained to entertain kids with games and sketches aimed for youngsters but that doesn’t mean you wont be laughing as well! Get more information and discount tickets via Goldstar.

Café Gratitude’s current cleanse promotion going on now through January 31st is perfect for those who partied too hard during the holiday. Get 50% off their 1,3, and 5 day cleanse programs at all locations.

26. The Hateful Eight Costumes & The Autry

Quentin Tarantino is a master in elaborate costumes and his latest film, The Hateful Eight, is no exception. Costumes from the film will be on view in the Imagination Gallery of The Autry. Designed by Courtney Hoffman and on loan from Cine-Manic Productions, Inc., the display features costumes worn by Samuel L. Jackson, Kurt Russell and Jennifer Jason Leigh.

For the 8th year in a row, GuerilLA will be helping organize L.A.’s No-Pants Metro Ride. Those who wish to accept this mission have to travel pants-less throughout the Metro system this Sunday. Choose from five rendezvous points and end up in Hollywood for a pants-less pub crawl of sorts. What to bring: $7 for a Metro Day Pass on your TAP card ($8 if you need to purchase a TAP card and the Day Pass), pants you can easily remove, and something in which to keep them. Underwear is NOT optional.

Known for it’s warm and interactive stage-free musical experience, Le Salon de Musiques features chamber music in an intimate environment on the fifth floor of the Dorothy Chandler Pavilion. The concert pays homage to four genius Russian masters: Rachmaninoff, Tchaikovsky, Rimsky-Korsakov and Shostakovich. Performances by Pacific Trio, soprano So Young Park and pianist Francois Chouchan are scheduled for this night. Kristi Brown-Montesano (Le Salon de Musiques’s musicologist), will be on hand to introduce and give context to each work, after the performances there will be a Q&A with musicians, as well as a Champagne and a gourmet high-tea buffet catered by Patina. Get more information and discount tickets via Goldstar.

31. The Farriers Package at Santa Anita

Doug Benson and Karen Anderson will be taping a new episode of the “Dining With Doug And Karen” podcast before the Globes air. This event is FREE (with rsvp) but it is a potluck so things like bags of chips and drinks are not encouraged, bring a real dish, and try to impress Doug and Karen as they sample everyone’s creations live on the podcast.

From January 10-15 the city of Pasadena along with 40 participating restaurants, bars, pubs, and lounges will offer specials on cheeseburgers in celebration of Cheeseburger Week.

Shop for new and old comic books, costumes, toys, collectibles and meet your favorite stars of sci-fi and comic past. This event will feature the original cast of Star Trek, other celebrities,tons of merchandise, and so much more. The Los Angeles Comic Book and Science Fiction Convention will take place at The Reef this Sunday and this year Billy Dee Williams a.k.a. Lando Calrissian will also be apart of the festivities. To celebrate the 30th Anniversary of James Cameron’s Alien appearances by Michael Biehn (Hicks), Lance Henriksen (Bishop), Jenette Goldstein (Vasquez), Mark Rolston (Drake), Ricco Ross (Frost) and Carrie Henn (Newt) are scheduled. Convention admission is a modest $12.

Shake off the holiday dulldrums with night of fun and uplifting songs at Musical Musicals presented by the E Spot Lounge in Studio City. Discount tickets available via our friends at Goldstar starting at $7.50.

Hollywood’s legendary El Capitan Theatre presents a special engagement of Lucasfilm “Star Wars: The Force Awakens” December 18, 2015 through February 7, 2016. Before the movie, El Capitan guests will be treated to an all-new Laser Lightsaber Curtain Show and can explore El Capitan’s exclusive display of costumes and props from the movie. Get more information and discount tickets via Goldstar.

The Competitive Drinking Film League presents ROCKETBEER a movie drinking game where you watch a film (The Rocketeer) about a guy in the 1930s with a rocket strapped to his back AND play a drinking game… get it? Rocket + beer, anyway, you win free beer if you’re on the winning team and their’s no cover! $5 craft beer and free popcorn too!

38. Pay What You Can Day At Craft And Folk Art Museum

Every Sunday it’s pay what you can day at the Craft and Folk Art Museum.

The Museum of Latin American Art has free admission every Sunday!

Admission to the Pacific Asia Museum is free on the second Sunday of each month.