Since time is precious in this fast paced city, we decided to curate a list of things to do in Los Angeles every week end that’ll help you decide how you want to spend your limited supply of attention (not to mention dollars!). 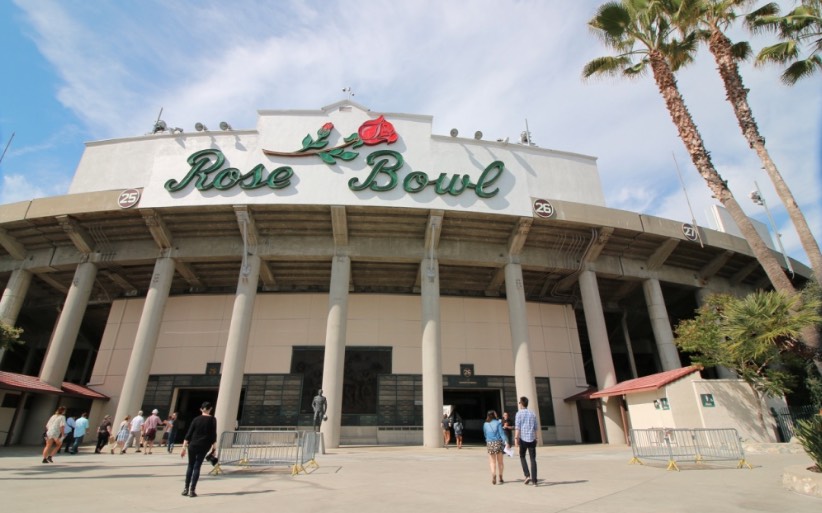 1. The Natural History Museum’s First Fridays returns for after hours at the museum, special music performances and themed panel discussions. This week focuses on the question: “How green is your plate?”

3. The Great Horror Movie Nights at the Old Zoo in Griffith Park will screen JAWS. The event will feature plenty of pre-show entertainment including games, prizes, and roaming scare-actors.  Discount tickets are available via Goldstar while supplies last. DISCOUNTED (via Goldstar)

4. Cinco de Mayo festivities can be found at FIGat7th this Friday. Dubbed as ¡Fiesta at FIG, the free event will feature a special, outdoor pop-up bar, live DJs, a female mariachi band and a DIY piñata workshop with Makers Mess. FREE

5. Guardians of the Galaxy Vol. 2 from Marvel Studios will be screening a the El Capitan Theatre all weekend. DISCOUNTED (via Goldstar)

6. This Friday there’s a launch party for Reality vs Virtual Reality, a new zine curated by Christie Morgan and Chrissie Abbott, which has enlisted 25 artists to answer the question ‘What does reality vs virtual reality mean to you?’ The event with feature with guest DJs and “other visual stimulation.” All at the Ace Hotel Upstairs Bar. FREE

7. Clear your schedule for the entire month of May, a massive 31-day food festival showcasing the diversity and flavors of L.A. is here. The much anticipated L.A. Times Food Bowl is the first of its kind and will include citywide dining events, a Night Market held at Grand Park in Downtown and a number of rare international pop-up’s curated by the team at the L.A. Times.

8. The Griffith Observatory hosts a monthly forum where some of the most amazing phenomena in the known universe are explained and discussed. It’s called All Space Considered and it takes place on the first Friday of every month. FREE

9.The Paley Center for Media is hosting a dazzling new exhibit called You Can’t Stop the Beat: the Art & Artistry of Hairspray Live! Visitors can view eye-popping costumes, set pieces and props from the Tony and Emmy–Award winning production. Exhibit is free and open through May 21, 2017. FREE

10. The Groundlings: The Completely Different Late Show is a hilarious improv show by the cast of the Groundlings’ Main Company. Audience shout suggestions throughout the night for improvisational scenes performed by some of the best in the business. It’s also a testing ground for brand new material for the Groundlings’ main show. DISCOUNTED (via Goldstar)

11. The Awkward Thoughts of W. Kamau Bell – Book Release Show, a conversation with  presented by Skylight Books at Largo.

12. Hecho in LA presents Taco Madness ’17 a sort-of food and drink festival by the folks over at L.A. Taco and I LOVE MICHELADAS happening at La Plaza de Cultura y Artes. Celebrate the city’s favorite food, the taco and down some of the best micheladas both made by award winning chefs and restaurants like Guerrilla Tacos, Tacos Punta Cabras and Mariscos Jalisco .  Event is 21+ and is free to attend!

13. Since its the first Friday of the month check out all the cool events happening around town including block parties and art walks for First Fridays.

14. The Rockwell Table & Stage presents The Unauthorized Musical Parody of Mean Gurlz. Relive the catty girl-clique “The Plastics” through song and dance. The show has been selling out to great acclaim. Happening all weekend.  DISCOUNTED (via Goldstar)

15. Moved LA is hosting a Cinco De Mayo creative movement workshop this Friday, May 5. The evening will includes happy hour drinks and piñata smashing. Tickets can be purchased online for $20.

16. A three-day BBQ & Beer Festival kicks off in Santa Clarita this Friday with Friday night kicks off with more than 50 craft beers on tap, live music and LOTS of cue’! DISCOUNTED (via Goldstar)

18. Eat|See|Hear, one of L.A.’s premier outdoor movie screening series, is back for its 6th season starting on May 6 with Mean Girls for an entire summer of movies, munchies and music. This year’s lineup includes a selection of 20 films and musical performances alongside 150+ rotating food trucks, all showcased at some of our city’s coolest venues. Check for discounted tickets before making your purchase. DISCOUNTED (via Goldstar)

19. Obscura Day organized by Atlas Obscura is designed to celebrate the world’s most curious and awe-inspiring places. Taking place this Saturday, Obscura Day in L.A. will offer 15 unconventional events as part of this international celebration.

20. Free Comic Book Day is back this Saturday. Occurring every year on the first Saturday of May, it’s an international comic book celebration during which comic book shops give away comic books absolutely FREE to anyone who visits their shops. FREE

23. Now in its sixth season, Street Food Cinema combines classic film screenings with live musical performances and tasty local area food trucks, all at awesome outdoor locations throughout Los Angeles. This weekend they will screen Singin’ in the Rain at Syd Kronenthal Park in Culver City. Check for discounted tickets before making your purchase. DISCOUNTED (via Goldstar)

24. Enjoy a night of comedy for a well deserved cause. Wait Wait…Dont Kill Me! will take on the year in animal news with comedians Lily Tomlin, June Diane-Raphael, Casey Wilson, Whitney Cummings and Craig Ferguson at UCLAs Royce Hall. Hosted by comedian Paul Scheer, All the proceeds will benefit the Voice For The Animals Foundation

25. Angel City Brewery Heritage Music & Arts Festival returns on May 6 and 7 featuring a range of entertainment to celebrate the Arts District Downtown and it’s commitment to the craft beer community. Expect live bands, food trucks, performances, art, plenty of beer and a chance to help paint the community mural. FREE

26. The famed Second City Hollywood comedy theater and improv school hosts an open house on May 6 for a day full of free workshops and shows that will leave you keeling over with laughter. FREE

27. Fans of our feathered friends can celebrate Bird Day LA 2017 with 50-plus bird and nature-themed events planned all around the city.

28. Tacos and Beer 5k Long Beach is a rewarding, celebratory run taking place on Cinco De Mayo weekend. After running the 5K, you’ll be handed two tacos and a beer at the after-party. The event will also feature live mariachi music, games, a mechanical bull, a piñata breaking party, and a Cinco de Mayo costume contest.

29. One special Saturday every month Griffith Observatory hosts a free public star party to highlight interest in observing the cosmos. The event is a great chance to try out a variety of telescopes, check out visible objects of our solar system, and perhaps best of all the parties provide a forum to exchange ideas and talk to knowledgeable amateur astronomers. FREE

30. Watch lucha libre wrestlers beat each other up and catapult themselves through the air during La Bulla at Plaza de la Raza Gallery in Los Angeles. The high octane event will also feature live music, an art exhibit curated by tattoo artist Johnny Quintana, live art making, and a car and bike show. DISCOUNTED (via Goldstar)

31. The NerdMelt Showroom presents Literati: A Comedy Show About The Greatest American Novels Never Written. Originated in Brooklyn, NY the show is here in LA for one night only with hosts Colin O’Brien (Just For Laughs New Faces 2016, Adult Swim) and Michael Wolf (Comedy Central, MTV) whom have read one book combined between the two of them. The hilarious readings will be brought to life with the help of some very special comedians, or shall I say “authors.”

32. Ocean Avenue’s Day at the Races hits Santa Monica on Saturday for a taste of some of the best food and drinks the street has to offer. This culinary walking tour of SoCal’s premier beachfront street celebrates the Kentucky Derby and raises funds for the Surfrider Foundation to protect the world’s oceans and beaches, so dress up in your Derby best!

33. Architect Frank Lloyd Wright’s gorgeous Hollyhock House will be used as a theater for the very first time when Fefu and Her Friends plays throughout the month of May in honor of the 150th anniversary of the esteemed architect’s birth.

34. The Original Renaissance Pleasure Faire is back at the Santa Fe Dam Recreation Area in Irwindale April 8 through May 21. Come to the fair for an afternoon of games, rides, mouthwatering food and artisan crafts.

35. Masters of Taste Food Festival returns to the beautiful Pasadena Rose Bowl this Sunday for a massive one-day festival including live music and entertainment, as well as sampling from the sweets masters, culinary masters, and beverage masters of our city. 100% of the festival proceeds benefit Union Station Homeless Services. Be sure to check for discounted tickets on Goldstar. ALSO: We have an exclusive promo code you can use to get 20% off purchase. Just use code WELIKELA at checkout from the official website.

37. Greystone Mansion Concours d’Elegance returns for the 8th year in a row featuring some of the most elegant, glamorous and prestigious cars in the world. More than 150 classic and exotic motorcycles and cars will compete for various awards, including “Best of Show.”

38. The Great Rock and Roll Flea Market will take over The Regent Theater in DTLA with an impressive selection of vintage collectors, antiquities dealers, vintage clothing, jewelry makers, music memorabilia, vinyl, local food vendors, food trucks, craftsmen and used musical instruments dealers. This one of a kind flea market is free to attend and open to all ages. FREE

39. 2 Girls 1 Pup is a comedy show hosted by Monique Madrid, Comet the pup and a rotation of girl hosts. Set up at Tailwaggers in Hollywood, pet owners can bring their little pups along for the show! Come early for the red carpet, PUPparazzi, PUPcorn and free beers!  All proceeds go directly to The Tailwaggers Foundation.

41. Head to the Santa Anita Infield for the annual Cinco De Mayo Car Show, presented by La Raza. Plenty of car eye candy from Classics, Kustoms, Rat-Rods, Lowriders and more will be on display. FREE

42. LululemonLA and MVMT Theory presents Boobs & Beyonce a rooftop Beyonce-themed dance class open to all levels. Event is located on the rooftop of the ROW DTLA. FREE