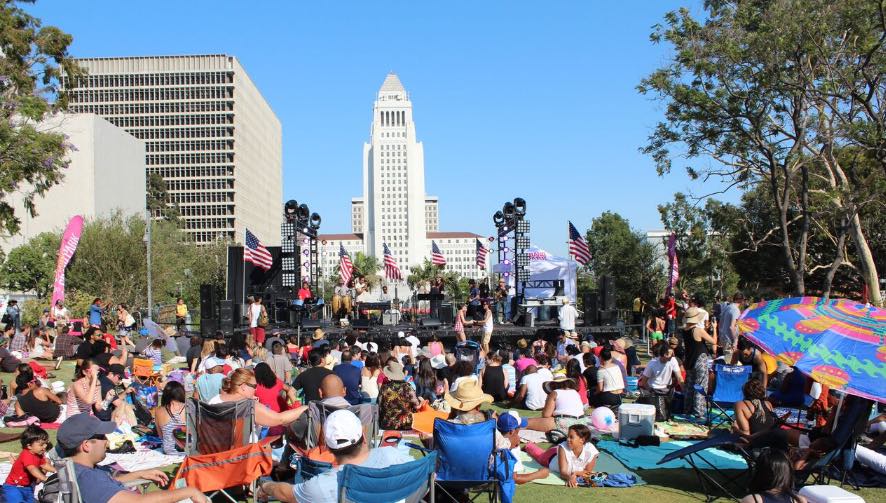 Southern California’s original and largest Asian-themed night market is celebrating five years of food and fun in 2016 with markets happening July through September.

The South Coast Botanical Gardens is hosting an outdoor movie screening! Guest will enjoy pre-show music, drinks from the bar and snacks from food trucks. This month they will screen Pitch Perfect.

4. Shakespeare in the Park

Shakespeare takes over Griffith Park once again offering free donation-based shows down at the Old Zoo area. Performances will feature a modern adaptation of “Richard III” every Wednesday through Sunday until July 24.

Imagine this… you are part of the Scotland Yard task force assigned to investigate an alchemist’s lab where you’ll have to uncover his secret plans and unlock his treasure chest. Sounds like your kind of event?  Visit Oddville Art Space and bring your A game this escape room won the Best Interactive Award at the 2016 Adelaide Fringe Festival in Australia. Get more information and discount tickets all week and weekend via Goldstar.

This Thursday Grand Performances will host a free concerts all weekend with Troker, Kneedelus on Friday, 1 to 3 on Saturday and Lucky Diaz and the Family Jam Band on Sunday.

8. Shakespeare by the Sea

The El Capitan Theatre presents a special engagement of Finding Dory (June 17 – August 7). Before the movie, The Bubble Guy will form bubbles beyond the imagination in a breathtaking bubble extravaganza live on stage! Get more information and discount tickets for this weekend via Goldstar.

12. The Beatles at the Grammy Museum

Now till September 5, the Grammy Museum will have over 400 pieces of memorabilia on display including recordings, videos and photos of the most famous band in the world.

Head over to Harvelle’s in Downtown Long Beach for a patriotic burlesque show put on by the Dirty Little Secrets this Friday. Tickets cost $10 at this 21+ event. We spotted discount tickets over at Goldstar!

Pasadena Museum of California Art is free this Friday from noon to 5p.m.

18. Avenue Q at the Cupcake Theater

The Tony Award-winning puppet musical heads to North Hollywood for a marvelous (and hilarious) look at trying to make it as an adult in NYC. Grab discount tickets to this Friday’s performance via Goldstar.

Tons of corgis will be descending upon Rosie’s Dog Beach in Long Beach for the biggest Corgi party of the summer. Get ready for lots of cuteness, food trucks, a bubble pavilion (with bacon-flavored bubbles), kissing booth, and contests, including corgi limbo, watermelon eating, and talent competitions.

Starting this Saturday L.A.’s historic transit center will play host to Live Nation’s Ones To Watch concert series, co-presented by KROQ’s Locals Only. These free musical performances will take place under the stars at the station’s verdant South Patio Garden and include emerging musical artists, a DJ, food trucks and more. This week music will be provided by: Michael Leier, Bloodboy, Figs Vision, and DJ – Grant Owens

21. The  Poetry Circus in Griffith Park

The Poetry Circus welcomes everyone to come and open there imagination and celebrate the art of poetry. The event is free and open to the public.

Celebrate our nation’s birth with a cold one at the Ballast Point Beer Independence Party. Free and open to anyone 21 of age and over the party will showcase the brewery’s wide selection and tasty eats will be provided by Barley Hops Grill.

Eat|See|Hear is back with a screening of Coming to America at the Autry Museum in Griffith Park. Be sure to check for discount tickets for this event via Goldstar.

Head over to the International Printing Museum’s annual Independence Day Celebration and partake in some patriotic activities like printing your own Declaration of Independence on an authentic colonial printing press, and visiting Ben Franklin, Thomas Jefferson and John Adams in the Museum’s Heritage Theatre!

The Hollywood Curling Summer Blockbuster Bonspiel takes place July 1-3, and as in previous years, will be holding a celebrity curling game that pairs up Hollywood stars with top-level curlers from around the world. Stars include Wil Wheaton, Jake Thomas, Scott Whyte, Thom Rivera and more. The celebrity game will begin at 8 p.m. at Ice Station Valencia, admission is free, there will be fundraisers held like raffles, a silent auction, merchandise and more for School of Rocks, Hollywood Curling’s youth program that brings curling to schools.

The Unauthorized Musical Parody of Troop Beverly Hills follows Phyllis Nefler an image-obsessed Beverly Hills housewife who decides to becomes the den mother of her daughter’s Wilderness Girls troop to prove her husband wrong, hilarity ensues! Get more information and discount tickets all weekend via Goldstar.

Join Clifton’s for a full scale U.S.O. star studded bash with performances by some of the most iconic stars from the 40’s who’ve entertained the troops including the Andrew Sisters, Judy Garland, Marilyn Monroe and more. Celebrate in style by dressing up in 40s fashion too! $10 admission and free for active military and veterans. Get more information and discount tickets via Goldstar.

Brooklyn-born craft market Artists & Fleas is heading to Venice this month and will feature locally made art, fashion, vintage edibles and beyond. Admission is free.

This hybrid scavenger hunt / sightseeing tour is a brilliant way to spend your Sunday afternoon getting to know the city of angels. Starting at the Dave & Busters in Hollywood, participants form teams of two to eight people and make their way to different L.A. sites trying to solve puzzles and unlock the clues that will lead them to the next location. At the finish line you can enjoy drinks and snacks, and hang out with your fellow competitors. For more information and discount tickets to enter the race, check out Goldstar.

32. Subtract On The Pier

Subtract On The Pier is a deep house music festival that is bringing back Wookie Weekend and Love Long Beach Pre-Party on July 3. This event is 21+, and will include a full bar, food and beverage service.

The massive food hall Smorgasburg LA is now open in Downtown Los Angeles every Sunday with a massive roster of L.A. heavy hitters in food involved.

This Sundays hike level is intermediate. The distance is 3.5-miles to Wilson Harding Golf Course. The hike begins at 8:00am. Get more information here.

36. 4th of July Block Party at Grand Park and The Music Center

Celebrate all things red, white, and blue at the 4th of July Block Party at Grand Park and the Music Center with fireworks cast from the civic center skyline. This all-ages, free event will also have live music, activities, food vendors and prime picnic spots to catch the show under the stars.

37. All-American 4th of July aboard the Queen Mary

The Queen Mary will transform the legendary ship into a tour of the USA highlighting several famous cities like Coney Island (featuring carnival games) to Nashville (BBQ pit stop) and Maui (hula show and lessons) with a fireworks show along the coastline at the end of the evening.

Nothing beats catching a game beneath the stars especially with our beloved Dodgers . The field will light up for a spectacular fireworks show this weekend as the Dodgers are up against the Baltimore Orioles. Our friends at Goldstar have discount tickets while supplies last for this one!

Celebrate the 4th of July at a free outdoor concert listening to David Marks, an original Beach Boy! With one of the most spectacular fireworks displays in Southern California drawing over 60,000 people since last year.

40. AMERICAFEST at The Rose Bowl

Come enjoy some world-renown showcase of bombs bursting in air, AMERICAFEST will have plenty of additional entertainment on hand such as a special salute honoring Jet Propulsion Lab‘s Juno mission that arrives to Jupiter on July 4th, a musical performance by the Liverpool Legends, and live motorcycle stunts during the TNT Freestyle Motor Cross Show.

L.A. Galaxy will play the Vancouver Whitecaps with a July 4 fireworks extravaganza to follow. Get more information and discounted tickets via Goldstar.

42. 4th of July Fireworks and Luau

Looking for MORE 4th of July events this weekend? Check out our list of 20 Fun Fourth of July Events and Fireworks Shows in L.A.