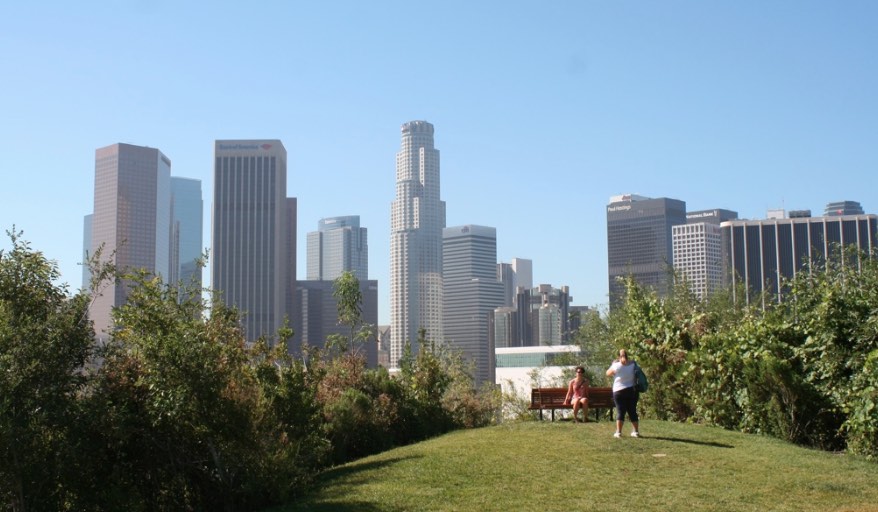 Posing for a pic at Vista Hermosa Park. Photo credit: Brian Champlin / We Like L.A.

3. Brew at the Zoo comes to the Los Angeles Zoo & Botanical Gardens this Friday for an evening of beer tasting from local craft and microbreweries. Sip suds while you enjoy live music, pop-up zoo keeper talks, and close-up animal encounters. Check for discount tickets before making your purchase. DISCOUNTED (via Goldstar)

4. Salt & Straw West Hollywood will be handing out free scoops all day this Friday as part of the start of their late night happy hour (everyday from 9 to 11 p.m. through) AND the launch of Live Music Friday’s, which will take place weekly on Fridays from 8 to 10 p.m. The free scoop offer (all day this Friday only) is for one regular scoop of any flavor but if you going during happy hour you can upgrade to a waffle cone… also for free! Salt & Straw WeHo only.

5. Garbage Pail Groundlings is the latest main stage show at the renowned LA theater. The show is filled with sketch comedy, improv and a cast of growing comedians who’ve made appearances in movies like Ted and television shoes like Workaholics. DISCOUNTED (via Goldstar)

6. Join Indiana Jones at the Hollywood Bowl  when Raiders of the Lost Ark gets played in HD on the Bowl’s jumbo screens, accompanied by the Los Angeles Philharmonic, performing John Williams’ iconic film score. Happening August 4 and Saturday, August 5.

7. The folks at Rooftop Cinema Club are back with a screening of Moonlight at LEVEL in Downtown Los Angeles and Fantastic Beast and Where to Find Them at The Montalban in Hollywood.

9. Enjoy some free Shakespeare this summer when the Independent Shakespeare Co. returns for the 8th year in a row with free/donation-based performances at the Old Zoo in Griffith Park.The Two Gentlemen of Verona Wednesday through Sunday.

10. There’s a Lion King Sing-Along happening this weekend at the El Capitan Theatre. Bonus: Timon the beloved Meerkat is set to make a special appearance before each show. Taking place all weekend. DISCOUNTED (via Goldstar)

11. City of Monterey Park presents Summer Movie Nights a movie series taking place at five different parks in Monterey Park during the summer. This week they will screen Finding Dory in a truly special space at the Barnes Park pool! Bring your bathing suit and make it a swim night. FREE

12. Shakespeare By The Sea returns with free performances for the summer. This Friday they’ll be performing Macbeth at Garfield Park in South Pasaden. While admission is free encourage donations to help support the play. FREE

14. Since its the first Friday of the month check out all the cool events happening around town including block parties and art walks for First Fridays.

15. The folks at Rooftop Cinema Club are back with a screening of Moonlight at LEVEL in Downtown Los Angeles.

16. The Griffith Observatory hosts a monthly forum where some of the most amazing phenomena in the known universe are explained and discussed. It’s called All Space Considered and it takes place on the first Friday of every month. FREE

18. Catch a flick on the rooftop of the Ritz-Carlton in Downtown Los Angeles during Summer Supper + Show Series presented by WP24 by Wolfgang Puck. The series continues with a screening of Pitch Perfect on August 4 and 5.

22. The 5th annual Hollywood Beer and Music Festival if a celebration of craft beer and live music wrapped into one day. Guests will have access to unlimited samples from over 60 craft beers, live entertainment and a food truck pavilion. Avalon Hollywood will host a complimentary After Party on the Bardot Rooftop with free drinks and a performance by DJ/drum duo Bass Punks.

23. 90’s wacky Warner Brothers carton Animaniacs returns for an all-ages live show at the Regent Theater to perform famous songs from the show and sharing behind-the-scenes moments about making the series. DISCOUNTED (via Goldstar)

24. Children’s Hospital Los Angeles’ All-Stars for Kids is hosting the first-ever ‘Play LA’ at the historic Los Angeles Memorial Coliseum as part of a hospital fundraiser highlighting healthy and active lifestyles for kids and families. Kids and teens will have a chance to play games and learn skills from top athletes and enjoy music performances, fun booths, and food vendors throughout the day.

25. Stay cool while learning the Winter Olympics sport of curling! Beginner and pros are all welcome. The lesson will feature an excellent introduction to the basics, including sliding stones, sweeping, and game strategy. All equipment provided. DISCOUNTED (via Goldstar)

26. Take a Downtown Los Angeles foodie walking tour and savor what the bustling neighborhood has to offer. The tour is three hours long, participants will stop at six popular spots to eat and the tour guide will take folks through the history of DTLA. Happening Saturday and Sunday. DISCOUNTED (via Goldstar)

27. The BBQ and Craft Brews Festival comes to Pershing Square in Downtown L.A. on August 5 and 6. The two-day festival will serve beer from all seven Downtown L.A. breweries, along with tastings of the best BBQ in SoCal. This is an all-ages event with no cover charge, all you need to do is pay for your beer and food!

29. Beard Battle LA will take over the Federal Bar in North Hollywood, for a day of 80s flashbacks, music, video games, a Time Machine De Lorean, and a stash competition with special judge Gedde Watanabe (Long Duk Dong in John Hughes’ Sixteen Candles) It’s all for a good cause as proceeds benefit the LA Food Bank.

30. The folks at Rooftop Cinema Club are back with a screening of Get Out at LEVEL in Downtown Los Angeles.

31. Dine LBC is Long Beach’s own city wide restaurant taking place August 5 through 13. Each participating restaurant will offer a three-course menu during lunch and dinner for a special price.

33. Pershing Square continues their free summer series this Saturday with a concert by Toad the Wet Sprocket. FREE

35. The Paley Center for Media in Beverly Hills will host TV Noir Screenings this Saturday and Sunday. The center will open up their archive of noir inspired television shows ranging from 1952 to 2015. FREE

36. KCRW’s 2017 edition of Summer Nights is a free all ages outdoor music series happening throughout the summer. This Saturday they’ll takeover Chinatown with DJs Jeremy Sole and Garth Trinidad. FREE

37. Movies on the Green bring free screenings of popular films to the Lou Bredlow Pavilion in Warner Center Park in Woodland Hills every Saturday in the summer. This weekend they will screen Finding Dory. FREE

40. Shakespeare By The Sea returns with free performances for the summer. This Saturday they’ll be performing The Taming of the Shrew at Los Encinos State Historic Park in Encino. While admission is free encourage donations to help support the play. FREE

44. The Long Beach Zine Fest is a one‐day event promoting all things in independent publishing. With 100+ writers, artists, photographers, activists, and DIY advocates on hand showcasing and selling their work, guests can browse through an extensive zine marketplace, enjoy live music and attend workshops and panel discussions. Held at the Museum of Latin Art. FREE

46. Rockwell Table & Stage presents The Unauthorized Musical Parody of Bridesmaids a hilarious musical parody of one of the best chick flicks ever to hit the big screen. Happening Saturday and Sunday. DISCOUNTED (via Goldstar)

47. The Great Rock and Roll Flea Market will take over The Regent Theater in DTLA with an impressive selection of vintage collectors in clothing, music memorabilia, vinyl and more. The flea market is free to attend and open to all ages. FREE

48. Hidden inside Griffith Park is the Carolwood Barn also known as Walt Disney’s Barn a historic landmark, where some of Disney’s creations were invented. This Sunday the barn will host an open house, giving guests of all ages a chance to come and experience this local treasure. FREE

50. Shakespeare By The Sea returns with free performances for the summer. This Sunday they’ll be performing The Taming of the Shrew at Eisenhower Park in Seal Beach. While admission is free encourage donations to help support the play. FREE