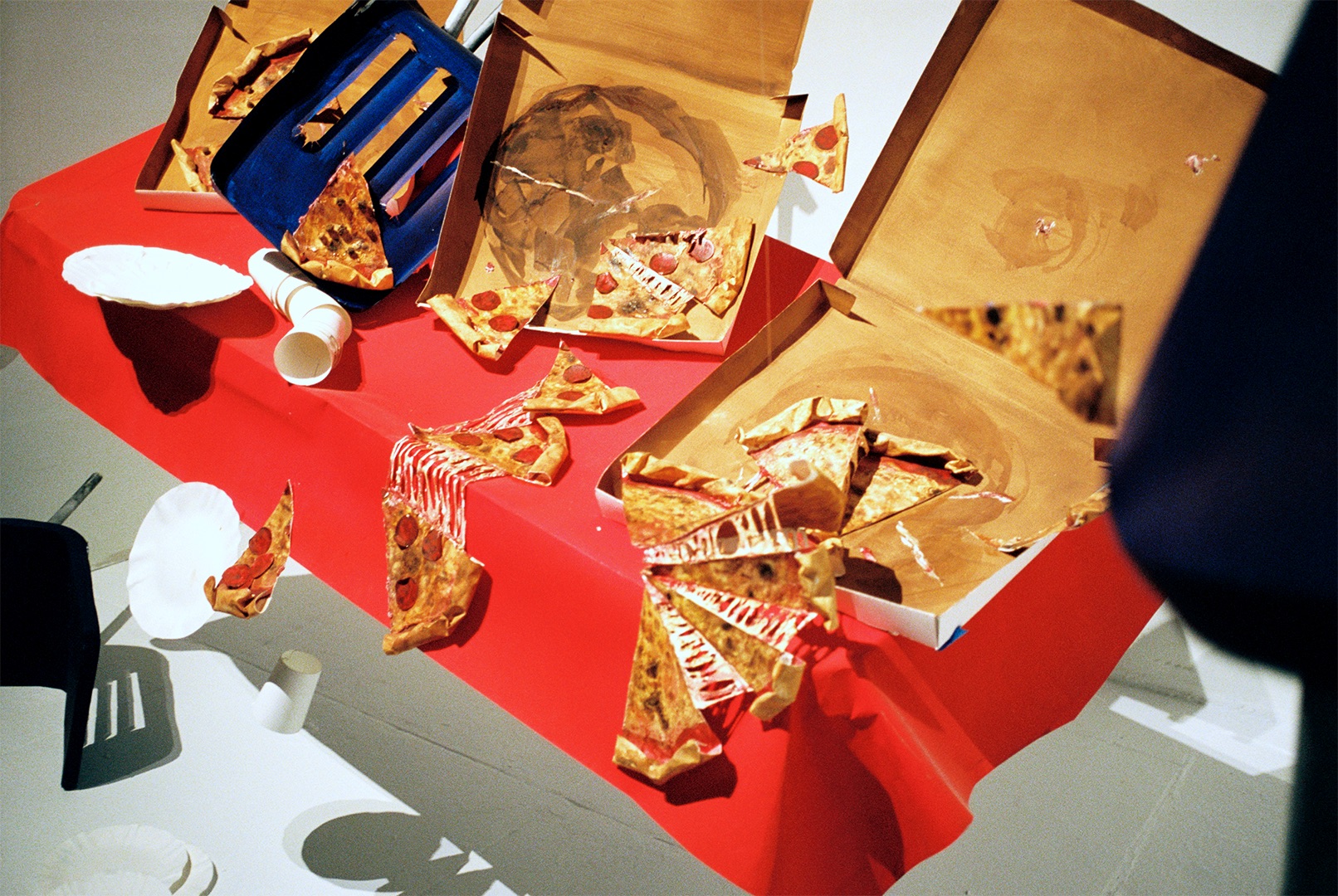 Think Tank Gallery’s latest show, Nothing Cheezy, is both a food-themed selfie pop-up (akin to The Museum of Ice Cream, Candytopia, or Egg House) and a parody of that same trend. A partnership with art collectives Pizzaboyzzz and Bloody Gums, the theme of the show is pizza, but the undercurrent is a sly commentary on the nature of art in our modern, social media-oriented world. It’s essentially what happens when a group of established, original artists make one of these things themselves with complete and total control over their pieces. Guests to the show will encounter a pizza Jesus, a pizza video installation that offers an artistic prize when you spin a wheel and land on the right ‘slice,’ and a mini-golf hole where Godzilla destroys a city made from pizza boxes. If that sounds, well, kind of cheesy, that’s okay.

“More than anything, probably, [Nothing Cheezy is] a mockery of ourselves for having been so deeply involved in this scene in downtown L.A. for the past 10 years or so,” Jacob Patterson, director of Think Tank Gallery said. “The show is called Nothing Cheezy because we’re making the absolute cheesiest art show possible. All of these ‘art’ shows are really cheesy most of the time, so we’re having fun realizing that it actually is fun.”

One of Los Angeles’s earliest Instagrammable, food-centric shows, at least in recent history, may have been the Break Bread exhibit Think Tank hosted in 2016 (The gallery was then located in the Fashion District, but has since relocated near Little Tokyo). The show featured work from Baker’s Son and Scott Hove. While the work contained poignant commentary on topics like race and police violence, it was most popularly touted as a “cake maze.” People selfied among the pastel installations, each one looking like a fantastical layer cake lined with icing and garnished with candies. But if they paid attention, maybe they got more out of it, too. That would certainly tie in with Think Tank’s mantra of “meaningful, not mindless entertainment.” And entertainment, Patterson admits, is the hardest part of that statement.

“You can make meaningful stuff all day, but actually connecting it to other people is really difficult,” he said. 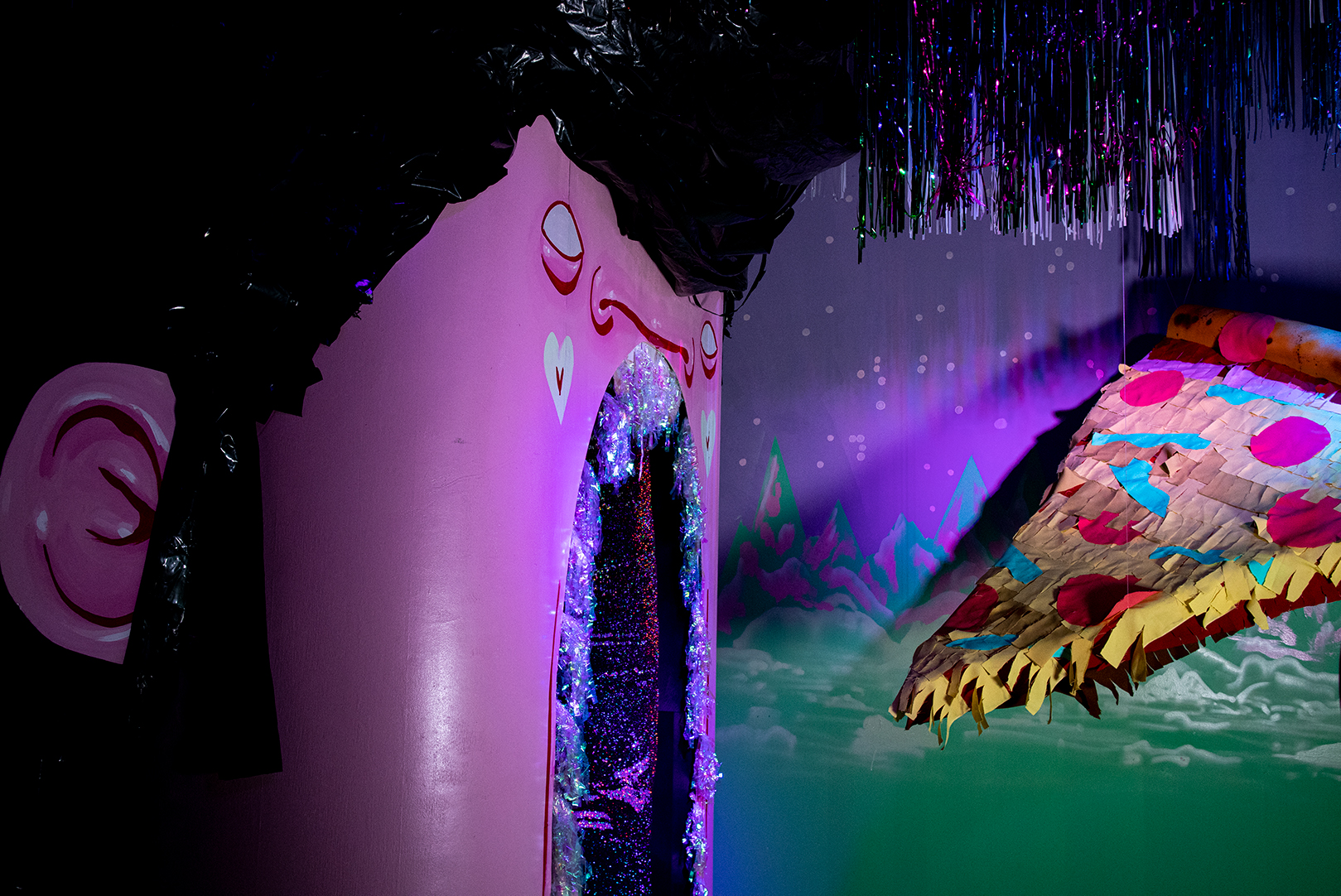 At Nothing Cheezy, Baker’s Son returns, this time with “Fuck Your Pizza Party.” The piece looks like someone just flipped a table at a pizza party, but in delicate watercolors. There’s a statement tucked in there pertaining to the artist’s past frustrations with elements of the art scene (a statement that is, at this time, off the record).

Elsewhere, Nina Palomba’s cartoony, cardboard cut-outs depict an anthropomorphic pizzeria dog surrounded by pizza boxes. On the concrete floor, there is an X for the subject of a photo to stand, while a dotted line leads to the ideal spot for a photographer.

Berk Visual offers a room of TVs playing various old TV and film clips (including scenes of Pizza the Hut from Spaceballs) across from a prize wheel that looks like a pizza. Spin the wheel and win the ultimate prize: an “impossible selfie,” taken by a secret security camera broadcast via livestream. Only winners will receive the livestream link.

“The entire tour is focused very heavily on crediting the artist and letting them do whatever they want,” Patterson said. “As you walk through the experience, there will be a lot of jokes on the culture [of selfie museums], but we also didn’t force our artists to do that. We just told them to make the most hilarious, cheesy thing that they could. So some of the installations are just what you would actually see at another food-themed pop-up, and then some of the installations are very subtlety mocking that scene—and some not so subtlety.”

After ascending through Balloonski’s pizza heaven (made from balloons, obviously), guests unload into an interactive parlor from artist Deladeso. Grab a piece of pizza (provided by a rotating selection of local pizzerias), play arcade games, and check out the various pizza-themed pieces in both the lounge and the picnic area beyond. Guests also receive a limited edition pin. Patterson notes that as this is Think Tank’s first ticketed gallery show, they want to make sure people get something for their money.

“We wanted to make our tickets half as much as any of the other selfie tours, but include twice as much,” he said. 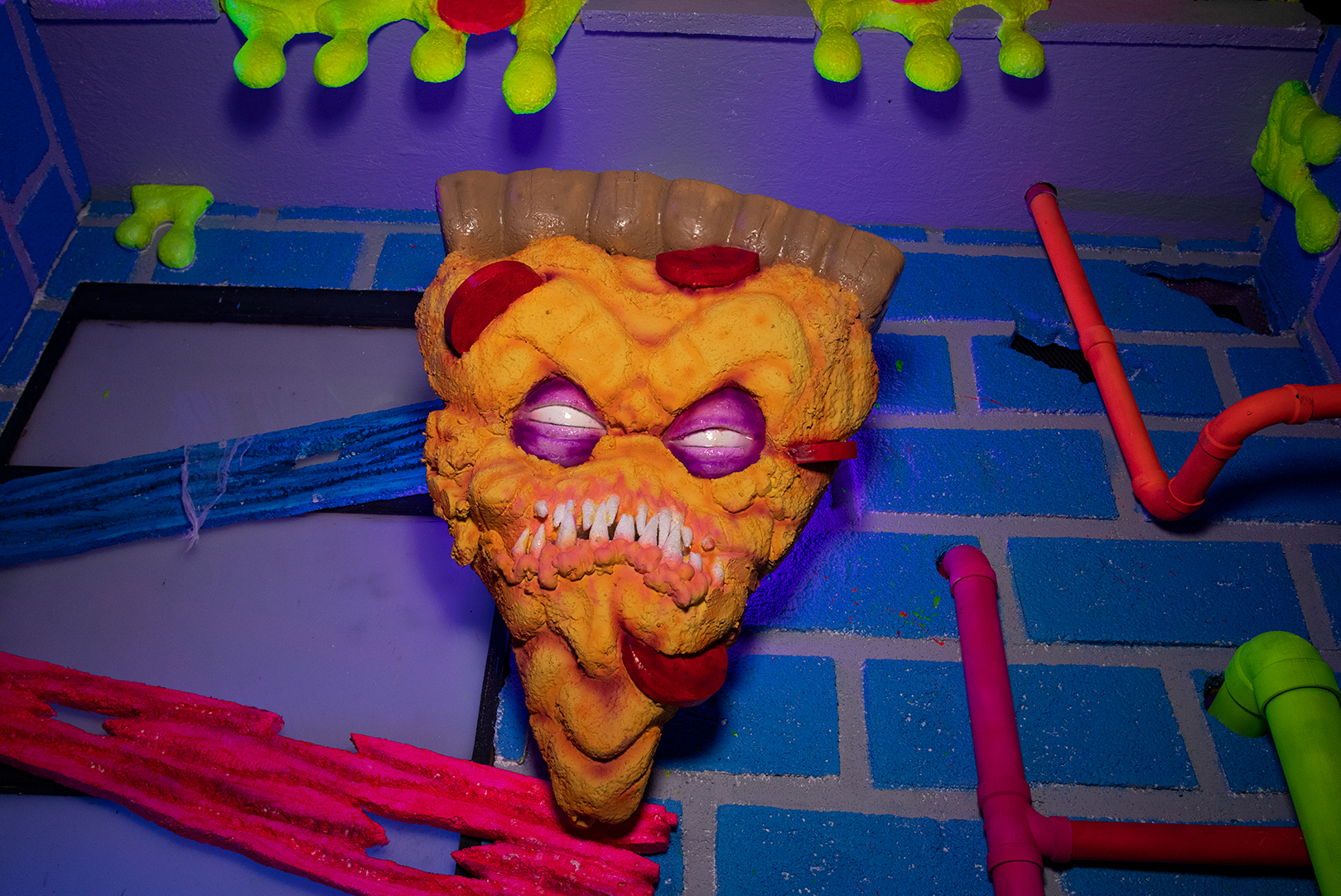 It may sound like Patterson doesn’t think highly of other selfie-oriented installations, but that’s not true. If such a pop-up serves as little more than paid ad space or is a copycat of another, then, sure, one could say they only exist to make money without serving their artists or their audience in any meaningful way. But that doesn’t mean that galleries need to be high-brow or can’t be photo-driven to be art. For people who don’t often find themselves in traditional galleries, installations can be a cool entry point to seeing art, Patterson said. These type of installations also present an opportunity to say something in an interactive way.

Patterson pointed to percussionist and activist Madame Gandhi’s installations in Refinery 29’s 29 Rooms. In Gandhi’s piece, guests were invited to hit several punching bags emblazoned with feminist messages. When hit, each one made a percussive sound.

“It was interactive, immersive, had meaning, was fun to do, and it was a good photo opp,” Patterson said. “If all the installations [in 29 Rooms] were like that, it would have been great.”

That’s the same conclusion I came to when I visited 29 Rooms. Some pieces felt like big ads and I got nothing from them. But I was enraptured by a room where musician Darby Walker improvised a song about any guest-submitted topic. Despite being written on the fly, her melodies and lyrics were gorgeous; her room was a respite from the frantic advertisement-heavy photo sets found elsewhere.

So, how does a company sponsor or construct something experiential without being terrible or shallow? Patterson recommends companies either hire artists and allow those artists freedom to create and experiment, or to seek out the creators who are already doing this work well and hire them.

“Let those artists keep building and making stuff, and your company can be responsible for that artist continuing to have a career,” he said. “It’s good PR for you, and you’ll get a better product out of it.”

Interested in getting Cheezy? Think Tank’s Nothing Cheezy runs through September 6. Tickets are $18 and up.