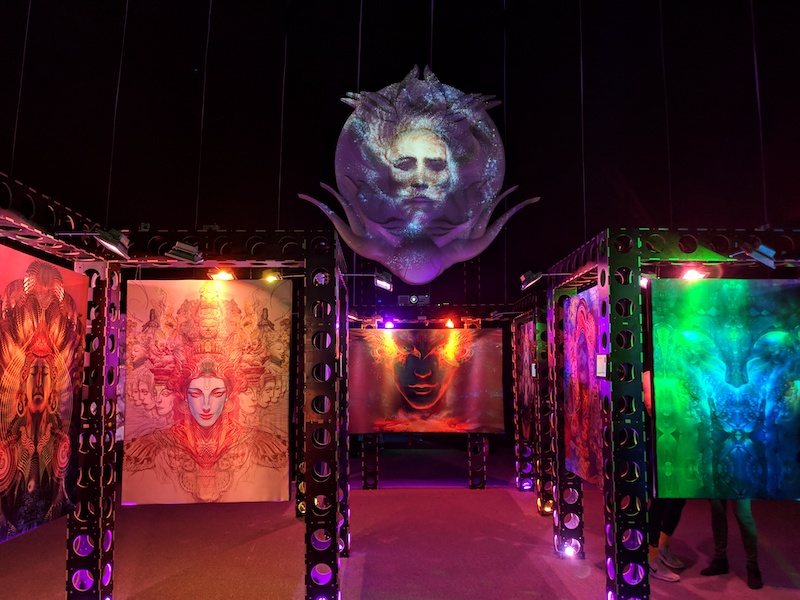 As “immersive” continues to reign as an art and entertainment buzzword, two factions have emerged: those experiences that ask you to forget your phone and just be present, and those that exist mostly for selfies. Wisdome Art Park straddles both as part-gallery and part-immersive experience, all spread among a series of domes in an Arts District lot. The current exhibition, Samskara, takes guests on a journey that includes paintings, optical illusions, virtual reality, and one very trippy video projection.

According to Marketing Manager Maria Aldarova, Wisdome Art Park first opened in Moscow in December, while their Los Angeles location near the corner of Alameda and Palmetto will remain up for at least the next three years. Exhibits will rotate, beginning with their current exhibit from artist Android Jones.

Android Jones is a digital artist whose colorful, psychedelic paintings and experiences have been displayed at Burning Man, the Smithsonian American Art Museum, and on the side of the Empire State Building and the Sydney Opera House. Eastern religion is a clear inspiration in his imagery, as well as the title of this exhibit. In Hinduism, samskara refers to rites of passage, but it can also mean the impressions our past actions leave on us. The latter definition seems to be the one the exhibit caters to; the info page defines a samskara as “a soul’s impression, the hardly felt emotional track in the subconscious. We travel from life to life between strange worlds and spaces, but we are not able to remember this, just keeping the samskaras.”

“We started working with [Android Jones] three or four years ago and just fell in love with his art because it’s so personal and so deep,” Aldarova said. “We made the immersive experience Samskara together and were showing it at [festivals like] Lightning in a Bottle and Boom. Here, we have something quite special.”

What’s special, in particular, is the size and the duration of the exhibit. Each dome varies in square footage, and each one contains something new. Guests enter through a hall of mirrors where ethereal, ambient music plays, like the world’s most relaxing fun house. This leads to the first dome, where holographic paintings flicker and transform as you move in a slow circle around the space. They’re interspersed with black-and-white optical illusions, which appear to undulate as you sway back and forth. The next dome is larger, this one containing the bulk of Jones’s work, including several paintings, projections, and a projection mapping installation where guests can wave their arms and see their movements reflected on a screen.

For those feeling particularly introspective, a series of questions and musings are posted throughout the exhibit. Some spark spiritual introspection. One, which accompanies an image of two lovers, asks, “When does time begin?” Does it, the statement ponders, begin with an explosion of gas or “the exploding love of our parents”? Yet another encourages the guest to selfie freely. We like selfies because of the value of ourselves, it suggests, but “self” is different from “selfish.” “Enjoy your selfie,” the note concludes.

The next section offers a handful of VR experiences, each one contained in its own smaller neon dome. These interactive experiences allow the guest to propel themselves through surreal worlds while drawing starbursts with a controller.

The next dome is the largest and features the centerpiece of the exhibit: a 22-minute video projected on the concave ceiling of the dome. For peak enjoyment, you’ll want to snag a seat on a futon towards the middle of the dome, then lean back so you can comfortably look upwards. Swirling faces, fractals, and other visuals swoop over and at you to music. Sometimes the faces whisper phrases. It’s mellow enough that fans of ASMR may feel right at home, while everyone else is apt to find it at least pleasantly enchanting—the way solar system planetarium visits were when you were a kid.

A fifth, smaller dome occasionally offers additional video content or, periodically, activities like yoga and sound healing. (We encountered a tea ceremony on our visit.) This dome is also where the Samskara video will play when Wisdome hosts special events in the larger dome. These events are varied and have included a live performance of Pink Floyd music and after-dark parties with outdoor fire pits, food trucks, and a cash bar.

If you’re starting to get the impression that maybe opening such an art experience in a state with legalized cannabis wasn’t a terrible idea, well, I wouldn’t say you’re wrong. Everything here lends itself to a mind-altering aesthetic and it’s no surprise that it’s done well at festivals. However, it should be noted that a dayside visit is family-friendly. And while it lacks the prestige of a modern art museum like The Broad, it’s can be a fun, spacey time for those who enter with the right mindset.

People should plan to spend one to two hours for a traditional visit or more if attending an after-dark or special event, but there’s no real time limit.

“We definitely don’t want ‘fast entertainment,’ where you just kill another two hours of your time and then say, ‘oh, what have I seen, actually? What was that?'” Aldarova said. “This is a consciousness-expanding immersive art and music venue so people can get here and forget about all the material things like bills, taxes, requests at work, and all the stress and dive deeper into a different state of mind.”