17 Sweet Spots for the Best Donuts in L.A.

Although they come in many variety, the consensus is that it’s pretty hard to mess up the humble donut… or is it?

This little breakfast food has quickly risen to the ranks of dessert, brunch, midnight snack and of course an obvious Instagram favorite, but what stands out here in L.A.?

Donuts in Los Angeles range a spectrum of options from a historical landmark in La Puente to a Portland transplant, 50-cent goodies to $3 masterpieces.

Check out our handy list of the best donut spots in L.A. below and eat your way through them all because, well, why wouldn’t you?!?!

[RELATED: 16 L.A. Spots You Gotta Try If You LOVE Breakfast] 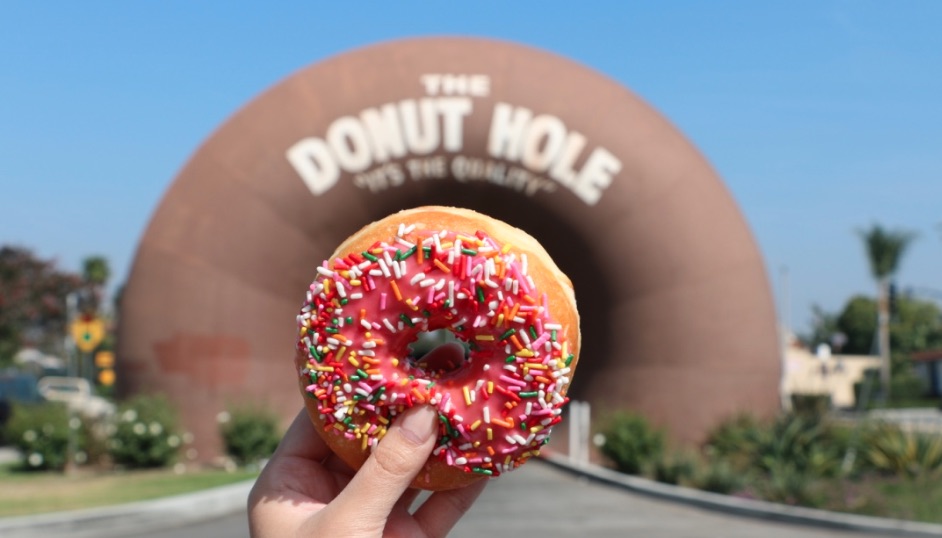 Who doesn’t want to drive through a giant chocolate glazed donut hole while picking up their donuts? It’s like a five minute donut voyage with treats in the end! Opened since 1968 the La Puente bakery is a landmark and one of the most photographed donut shops in the country. Like the sign (on the donut) saids “Its the quality” that keeps people coming back for more, count on classics like the maple bar, sprinkle cake donut, bear claw, jelly and cinnamon roll.

Fan of fritters? Get ’em here. Like your donuts raised? This place has what you’re looking for. The family run spot located inside an old school strip mall also gets creative with donuts like Black & White, Cookies’n Cream filled and Raspberry Butterfly. If you happen to find yourself in the Valley stop by Blinkie’s but keep in mind they close at noon and it’s cash only.

Made fresh every hour Sidecar’s yeast and cake donuts are some of the most artfully decorated and delicious fried pastries in the city. The team makes everything in house from the infused glazes, hand crushed compotes to the custards and creams. With monthly flavors usually inspired by the latest farmers market finds donuts can range from Pineapple Upside Down, Blueberry Cheesecake to Mexican Hot Chocolate.

This uber popular 24-hour donut shop seems to have a line at all hours of the day/night. You can find crazy concoctions often in vibrant colors and adorably decorated such as the Panda made up of an Oreo cookie face with white glaze and cream. There are cereal donuts too like Fruity Pebbles and Lucky Charms but the classics are always satisfying. With close to 20 flavors that include Matcha, Boston Cream and a pink glazed donut with rainbow sprinkles, you honestly can’t go wrong here.

The acclaimed Portland donut shop opened a post in SoCal on Abbot Kinney in Venice and has since been a favorite for more than just the locals. Known for their signature brioche-style dough and sophisticated flavor combinations like Blueberry Bourbon Basil, Piña Colada and Berry Pistachio, every donut is made with sustainable bread flour, cage free eggs, whole hormone-free milk, and European-style butter cooked in rice oil.

For you L.A. – the Strawberry Mojito!!!Fresh Strawberries, mint, rum all on a fluffy buttermilk donut. This one is 💋💋💋💋 !!! Available starting today ( #NationalDonutDay ) at our Venice location. And FYI a portion of today's proceeds will go to @roguemachinetheatre #strawberries #mint #mojito #buttermilk #rum #donutsforgrownups #eaterla #instavenice #losangeles

Customize your own donuts from doughs to glazes with filling options that include ice cream, nutella, fresh fruit and A LOT more – basically it’s a mad-donut-scientist dream. If you rather let the pros do the choosing order one of their pre-made signature donuts, such as The Angry Samoa, Polar Berry Club and Bacon 182. There are even gluten-free and vegan options too.

This modern American eatery, invites Angelenos to snack from morning till night on their crullers and donuts. The brunch offerings include dishes like the Fried Chicken & Crullers and every kidults dream a Breakfast Donut loaded with cereal milk and captain crunch. As for lunch and evening expect a rotating menu of their signature crullers which taste very close to a airy churro but in circular form stacked with adventurous combinations like the Circus Cruller with vanilla bean ice cream and crystallized floral sprinkles, Bananas Foster Cruller with a rum glaze and a Space Age Cruller with marshmallow fluff, astronaut ice cream, and pistachio ice cream. 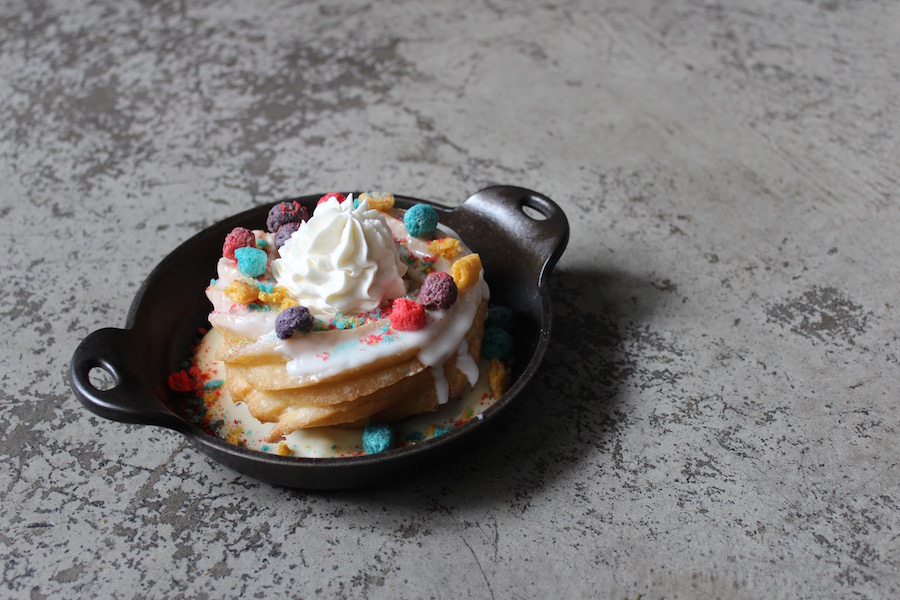 Yup, it’s the place seen on television for over 40 years now. The 24 hour spot fry up suburb donuts that convert people into devoted fans after one bite. Made with quality ingredients void of artificial colors, these donuts are created with seasonal fruits like strawberry filled glazed, apple and peach. All donuts are fried with potato flour dough and come in fruit stuffed, foot long Tiger Tails, crullers, fritters and Old Fashioned. Although in Glendora the shop draws a line and treats can sell out so call ahead to ensure the flavors you want will be there and godspeed.

The Maple Bacon Donut is synonymous with this classic Downtown diner it’s one of the most popular items ordered daily. A winning combo of bacon’s savory notes and maples sharp sweetness make this donut one to truly indulge in.

Family owned since 1989 the donut shop tucked away in a small strip mall of Miracle Mile is baking some of the most inventive donuts all around. Creations like the Oreo Filled donut or Glazed Stuffed with Fresh Strawberries are a hit. They even have Cronuts, that croissant-donut hybrid that people went mad for not too long ago, except it’s called SKronuts here and they carry an impressive variety with unique fillings such as peaches and cream, strawberry, apple pie, blueberry and even maple bacon.

Get your fix of trendy donut creations like the Cronut which come in regular sized and mini, or try their classic donuts which come in varieties from the Maple Bacon Bar and Lemon Squared filled donut to the Blueberry Old Fashioned.

You can’t escape the bakery display at Republique, it’s the first thing you see when you walk in the door beckoning you with its impossibly hypnotizing treats curtesy of pastry chef Margarita Manzke. There are cookies, cakes, breads and tarts which are all baked to perfection but the bomboloni, an tennis ball shaped Italian doughnut that comes with a variety of fillings, is the star. Flavors include cinnamon sugar, s’mores, raspberry, chocolate banana cream and crème brûlée. For the ultimate donut meal stay for brunch and order the Sticky Bomb a maple glazed Bombolini filled with creme brûlée and topped with bacon and pecans.

Since 1965 Stan’s Donuts has been a donut staple to those living in and around Westwood. Their gourmet peanut butter donuts and pretzel donuts are unique along with a seemingly endless list of flavors and pastry types it’s hard not to fall in love with this place. The variety of flavors, glazes, jelly and custards will make it hard to leave with just one.

Family owned since the 80’s DK’s is like the Willy Wonka off donut shops. Here you can find the first Ube donut made with a purple yam popular in the Philippines, a waffle donut hybrid called #WOWNUTS and even a Grilled Cheese donut. Open for 24 hours you can get your fix of pretty much any kind of donut creation imaginable but if you are looking for a simi classic order their Famous Glaze, Honey Glazed Toasted Coconut, Sprinkles or Maple Bacon Bliss.

Tired of the same ole donut flavors? Has your taste for the humble fried treat plateaued? I guess you’re a donut snob… and that’s ok because you’re not the only one. Janeen Gudelj’s and her team have elevated the donut to handcrafted little miracles made in small batches with raised yeast and farm-fresh ingredients. Flavors include Orange Zest Pistachio, Razzy Lemon LuLu, the Berry Best and the Campfire. Sounds like the donut you’ve been searching for? They deliver to a variety of shops in Los Angeles like Food + Lab and Copa Vida so check their site for your nearest locations.

The housemade Bomboloni at this Manhattan Beach restaurant come sugar-dusted and filled with nutella and lemon curd. The warm chewy Italian donuts by Pastry Chef Rebecca Merhej’ is always a must during weekend brunch or dessert.

If you like a good breakfast burrito AND extraordinary donuts ( who doesn’t?) Cofax will become your new mainstay. Pastry Chef Nicole Rucker has managed to create donuts that are perfect in every bite. Her raised and cake donuts come in a rotating of flavors that include Honey Sea Salt, Hibiscus, Lemon Pistachio, Raspberry, Cinnamon Crumb, Compartes Chocolate and more.

There were many tough calls since donut shops are so abundant in our city. Did we miss your top spot? Tell us your favorites in the comments below.