10 Insanely Cute L.A. Food Creations That Will Make You Smile Every Time

Ever wonder where the cutest foods in town are hiding?

Whether we’re talking about nun shaped creampuffs, 3-D kitties floating in your latte, panda donuts or Star Wars chocolates, the city of angels has some of the cutest food creations you’ll ever find.

So charge up your phones because we are about to embark on a very Instagramable journey into the world of cute foods from the San Gabriel Valley to food festival unicorns at the OC Night Market, and beyond.

The cuteness begins NOW (listed in no particular order).

Inspired by the character Japanese bento boxes, Lazy Bear LA’s adorable bowl is a crab stir-fried curry with a sleepy looking bear face rice mold on the side. The curry recipe is a family secret straight from Thailand.

Tests for a restaurant in LA. Any idea of which one it is? #creampuffs #choux #LAfood #LAgram #sweet #picoftheday #spring #yum # dessertfirst #instagood

The Sweet Nuns is a french pastry shop specializing in stacked cream puffs, traditionally known as “religieuses”, aka Nuns. Made of two light pastry cases called “choux”, the mini choux is stacked on top the bigger one, then filled with crème pâtissière, glazed, designed and decorated. Flavors include match green tea nun, pineapple/lime nun, pumpkin spice latte nun and more. They even come in mini nun size!

Experimenting with a new flavor today: Nutella with toasted marshmallow & waffle cookie. It's like a s'more…just with different ingredients. Plus get a pack of 3 baby macarons for the price of one regular ⭐️✨. #honeyandbutter #macarons

Ok, ok… Honey and Butter is technically not in L.A. (Costa Mesa to be more exact) but their macarons are too cute not to mention, with featured characters like Totoro, magical unicorns and even a hilarious Chuck Norris macaron! The husband and wife team make their macaron shells with California almonds and their jams from fresh fruits, nuts and temper the chocolate themselves. Check out their Instagram often, they only stay open, till they sell out of inventory and thats pretty much every time.

These aren't the mignardises you're looking for… #starwars #theforceawakens

It's a little under 5 months since we started #icecreamgardenla. We wanted to say THANK YOU to everyone who has helped us along this journey – our friends and family who worked our booth, fellow vendors for their kindness and friendship, coordinators for putting on awesome events, bloggers who promote us, and most importantly our customers who give us the courage and the drive to do this in the first place. We are truly blessed and grateful for this opportunity to serve you. #icecreamgarden #dirtcup #beachcup #oreos #nillawafers

The ice cream gardeners at Ice Cream Garden LA create adorable ice cream sundaes in two themes; potted plant (sour gummy worms with oreo “dirt” and a sprig of mint) or beach scene, pictured above with a teddy graham laying on a sour belt “towel” an a bed of graham cracker “sand.”

Who wouldn’t want a latte with an adorable mama and baby kitty looking up at you? Coffee shop Love to Go in the SVG serves up animated companions with their caffeinated drinks. Pretty much everything from Minions to adorable animals napping in a drink can be made. They also use LAMILL beans, so it taste good too!

happy Friday everyone! we hope everyone is just as relieved as we are that the weekend is finally here 😁👍🏽👍🏽👍🏽 don't forget that in exactly ONE week we will be at the 626 Night Market once again! 😛 we hope to see everyone and your friends and family next week 😊😊😊 #spikedjuices #spikedjuicesla #stayhydrated #626nightmarket #happyfriday

Seen at the 626 Night Market and OC Night Market, Spiked Juices is cold pressed juice inside a glass mason jar, wrapped in a twine bow with a little watermelon character smiling at you. What’s not to like? Flavors include: watermelon mint juice, Chamango, green juice, mint lemonade, ginger bomb, berry lemonades like blackberry and strawberry.

Happy Friday to all of our friends! Our staff and Honey Bear are waiting for you to join us. #MilknHoneyUSA

This Teddy Bear Brick Toast at Milk and Honey is ginormous, you might want to share it with a hungry friend. The bear sits right inside the Japanese “brick house” toast decorated with chocolate, custard, whip cream, fruit and scoops of ice cream.

It’s hard to pick just one Barton G. dish to count as “cute” but the mouse trap mac n cheese is straight up hilarious. Pasta spirals in a cheesy cheddar sauce on one side and a wedge of cheddar on the other. Just make sure you don’t get your hand caught in the mouse trap.

10. The Panda Donut At California Donuts 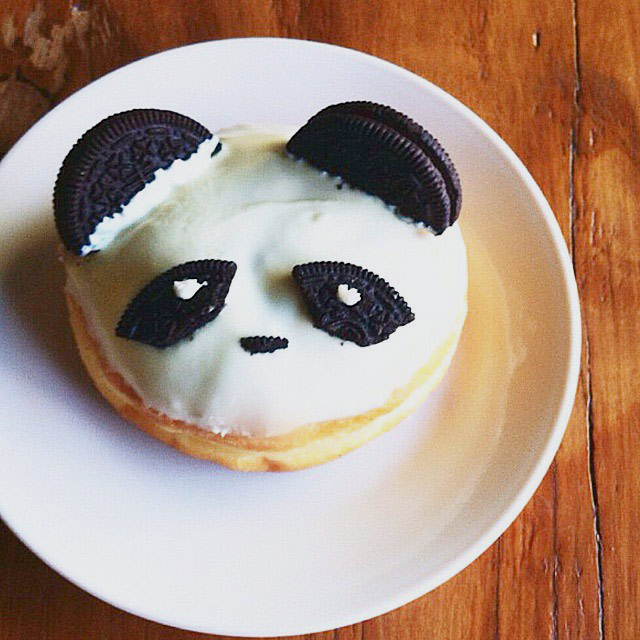 The Panda Donut at Koreatowns 24 hour California Donuts is kind of instafamous on social media. The adorable panda face is made up of Oreo cookies, white glaze and filled with cream. It might be hard to take a bite out of this one, it’s just too cute!

What are the cutest foods in L.A. you’ve seen? Let us know in the comments below!