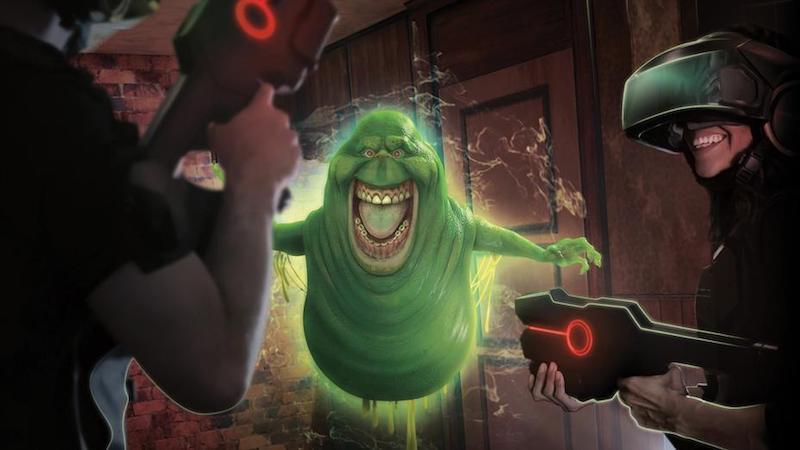 Los Angeles’ most tactile VR experience is getting two new skins leading up to Halloween: a light-hearted, mildly spooky Ghostbusters adventure and the significantly scarier Nicodemus: Demon of Evanishment.

The VOID landed in the Glendale Galleria this past spring, offering Star Wars fans a chance to fight their way through an Imperial base in virtual reality. What’s special about The VOID in comparison to other VR games is the Utah-based company offers immersive “hyper-reality” experiences. This means that while inside VR, you can touch and interact with the things you see in your headset. You can sit on furniture, brush your hand against walls, push buttons, and hold blasters/proton guns in your hands. The VOID also employs other sensory tricks: when Star Wars: Secrets of the Empire players descend on the volcanic planet Mustafar, they can feel the heat and smell the sulfur coming off its surface. Starting this month, Star Wars takes a backseat to Ghostbusters every Tuesday and Nicodemus on Wednesdays.

Ghostbusters: Dimension casts you and your friends as rookie Ghostbusters on a coffee run. However, on your way there and back, you’re given an ostensible reason for your trip: go check out a decrepit, old apartment tower and see if it’s haunted by the spirit of a previous occupant. (Spoiler: Obviously, it is.) Players will explore the space while wearing a Rapture headset and a haptic vest that vibrates when you’re ‘hit’ by enemy fire or shrapnel. Additionally, each player is issued a plastic proton blaster at the beginning of the mission, which can be used to fend off an assortment of ghouls. But definitely don’t cross the streams (unless it’s absolutely, necessary, of course).

It’s worth noting that Ghostbusters: Dimension came first, and Star Wars, felt, in my opinion, like a much smoother ride and overall, a more action-packed experience. That’s not to say that Ghostbusters isn’t fun; The VOID remains one of the most interesting, tangible, and truly immersive VR experiences out there, and fans of the films will likely get a kick out of the game’s many Easter eggs.

Nicodemus, on the other hand, is the VOID’s newest game. Developed with the U.K.’s Ninja Theory, this supernatural horror game takes place in 1894 during Chicago’s World Fair. Just days before the end of the fair, guests were lured into the ‘Evanishment Room,’ located within the Electro-Spiritualism Exhibit. Those guests disappeared, never to be seen nor heard from again, and the attraction shut down. Several weeks later, witnesses reported seeing ominous lights shining from the abandoned exhibit.

You and up to three teammates must travel back in time to the night of the disappearance to figure out what happened. However, you’ll also have to escape Nicodemus, the demon that stalks its halls.

In the Bible, Nicodemus is a Pharisee who helps Joseph prepare Jesus’ body for burial. The apocryphal Gospel of Nicodemus, in part, describes Christ’s descent into Hell, from which he frees several captives before ascending to Heaven. Why is Nicodemus the name of a demon now? Sounds like a mystery waiting to be solved.

Guests will choose among six avatars, all appropriately dressed in 19th century garb, to poke about the dilapidated fairgrounds. And yes, there will be plenty of puzzles to figure out.